Home » Ideas for Change » As goes the Iowa caucus, so goes any government led by Democrats
« Sizing up the 2017-2020 Housing Cliff Hanger
The Recession Called “Repocalypse” »

As goes the Iowa caucus, so goes any government led by Democrats 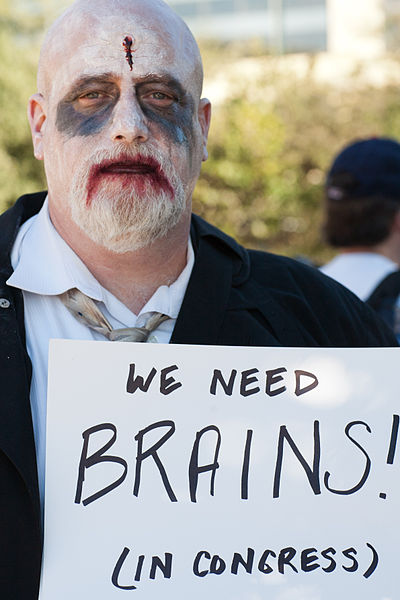 Demonizing Democrats and reviling Republicans is as easy as shooting fish in a gun barrel.

Democrats are so addicted to process, they can’t get anything done because they spend twenty years arguing about what to do, rather than doing it. That’s why they have caucuses, instead of primaries. They love nothing so much as getting together for a good argument. When they finally do make a decision, they spend the next decade with one faction suing another, wherein minority groups try to prevent the majority decision from being enacted while the Democratic majority makes sure they have every opportunity possible to do so. Thus, after thirty years of arguing, they still get nothing done, but they get it done at great legal expense.

They love minority factions so much that they deliberately try to maintain a fractured society by endlessly reminding people of how one group in their party abused another for hundreds of years so the second group should remain angry at the first group forever while the first should forever obsequiously beg forgiveness from the latter. They prefer that over creating a melded and actually forgiving society because they don’t believe in harmony when arguing is so much more invigorating.

They love rules and regulations so much that they create more rules than they can remember and more than the average person can figure out how to navigate, which is why they cannot run a primary that works. They even create rules on how and when one rule is to be applied over another when their inevitably conflicting rules contradict each other.

Oh, wait, that was George Bush in 2008, which brings us to Republicans.

Stupid is as stupid does

The only way you could find any party that matches up to the ineptitude of Democrats would be to take a ride in the Republican clown car. They apparently run the clown-car factory, which is no surprise because they love belching, deregulated factories more than the earth, itself. Their idea of a statesman is someone who can throw darts at Russia from her lawn chair or a rich mogul who straps his dog to the top of the family wagon for an ear-flapping fun trip to Salt Lake or a boisterous buffoon with Donald-McRonald red clown hair who can turn the White House into a reality TV show by firing his apprentices out the master house’s newly installed revolving door faster than he can get them approved for their positions — a man of minor morals who thinks he makes himself sound like a great leader by constantly telling the whole world he hires morons, liars, and leakers who deserved to be shot out the door.

In a nation overflowing with hundreds of millions of people, the Republicans apparently cannot find a single Abraham Lincoln to save their impeachable souls. So, they load up the party-mobile with various bizarre characters who all blather with less eloquence than Romney’s barking Wagoneering dog to an electorate that claims the nation should all speak English, even though none of them can. That’s because they don’t trust anyone who is actually capable of sounding intelligent, for they all know a college education is the mother of all snobbery.

Instead, the poor bastards out-snob the rich ones by despising their education and their fancy clothes, even as they try to make them richer by readily serving them at the most minimum wage possible. Then they brag about how wages under their administration are rising faster than ever for the poor solely because of the other party’s minimum wage increase. Servitude to the rich remains forever their plight because those fancy dolts flicking their cigar ashes over the sides of the clown car somehow manage every year to convince the blue-collar Republican horde, even though it vastly outnumbers them, that the best way to have opportunity for the many is to give the 1% an infinite number of special tax breaks while protecting them from law suits when they abuse their underpaid workers so they can continue to hand out dividends and stock buybacks to themselves. They even convince the working class to clobber their own unions while they, as the rich masters, kill their own customer base with toxins and enshrined poverty, assuring their own eventual demise.

If you want to have a country with a sustainably economy on a healthy planet with happy people, start first by ditching your own party and thinking for yourself. Or ride the stupid train with everyone else.