Home » Economic Predictions » The Bears Have it Right: Economy went Polar Opposite of Bullish Predictions
« Retail Apocalypse and Carmageddon Continue to Pick up Speed as Predicted Here
More Evidence that the Bears Have it Dead Right »

The Bears Have it Right: Economy went Polar Opposite of Bullish Predictions 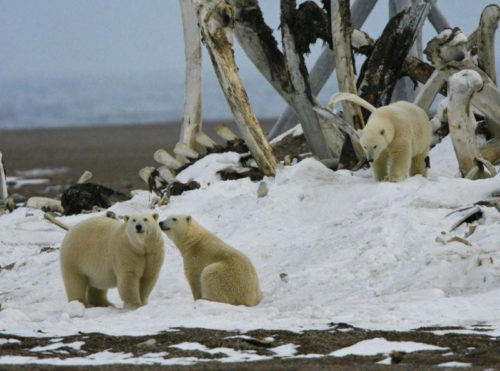 Bears, like myself, picked the meat off market bulls throughout 2018. We scoffed at the start of the year when bulls concocted a narrative that said bears would starve because 2018 was going to be the year of “global synchronize growth.” We bears bawled that this was euphoric nonsense.

Global economies fell off a cliff as soon as the bulls’ narrative took hold, and all economies continued to falter for the entire year. The US was the only major economy to get a significant boost, due to absolutely massive tax cuts, which piddled away after two quarters (fourth quarter now estimated at 1.5%).

The more polar opposite from bulls the bears went, the more right they were

I’m going to make my first prediction for 2019; but, first, I’ll offer the following points as proof the bears were completely right for 2018:

I predict we are caught in an economic polar vortex

The yield curve has already twisted and contorted into portions that are flat or inverted. Nomura’s Charlie McElligot notes that steepening of the curve after inversion is the actual point at which we have almost always gone into recessions historically. My way of putting it is that “flattening of the yield curve cocks the gun; reducing interest rates again fires the gun.”

My first prediction for 2019: I believe the US will go back into recession as soon as the Fed actually reverses course on interest rates. I believe things will be generally bad enough by late spring or summer (for all the reasons I laid out in my Premium Post titled “2019 Economic Headwinds Look Like Storm of the Century“) that we’ll see the Fed actually stop QT and reverse interest rates.

However, we will already be in a recession when they do, though it will not be officially declared that the US entered recession until the end of the year or start of 2020 because recessions are only declared a month after GDP has receded for two straight quarters.

The first quarter of receding GDP is when “the recession” officially begins. In other words, data only tells us in hindsight that the economy has been receding, and often we don’t know until GDP numbers get revised.

The past is prologue to the future and history rhymes

I expect the Fed to live up to its historic reputation of declaring no recession in sight even as it is standing in the middle of one. While we won’t likely have any official delcaration until next year, the rest of us will feel the polar swamp wetting the seat of our pants before the Fed feels a thing.

(Bear in mind, the Fed has to keep as good a face on everything as it can because if it actually said it saw a recession coming, it would crash the stock market all over again. Its words would become a self-fulfilling prophecy because investors hang on every shade of meaning of every word the Fed chair speaks. And another market crash would take a crumbling auto, retail, housing economy down with it.)

Now bulls are back to saying the fact that market fear is gone and greed is back is good reason to believe we are on the rebound. They find a narrative for their wishes no matter what. Who you gonna trust?

Before you answer that …

Consider that stock market mania throughout the past decade has been supported with a misleading narrative of rising earnings per share. As I continually pointed out, EPS was mostly rising due to stock buybacks, not due to the soaring health of corporations. We would not be seeing major retailers falling right and left for the past two years, automakers shuttering factories, Caterpillar sales constantly struggling to slow their descent, high-tech stocks crashing 40% … if companies were fundamentally doing better and better.

Fundamentals were repeatedly and readily ignored as EPS rose. What we saw was historically massive buybacks reducing the number of shares in the denominator of the EPS number. Nobody cared that buybacks were the primary reason EPS was rising and were the sole financial fuel buying the rise. All that mattered was that EPS looked nominally good while buybacks were on a rampage.

However, Morgan Stanley, which was in my opinion the only major bank right about last year, now says EPS is about to bomb:

Mike Wilson, chief equity strategist at Morgan Stanley, on Monday downgraded S&P 500’s earnings-per-share growth target for the year to 1% from 4.3% and warned of a looming earnings recession. “Our earnings recession call is playing out even faster than we expected,” said Wilson in a report. “When we made our call for a greater than 50% chance of an earnings recession this year, we thought it might take a bit longer for the evidence to build….” For the current quarter, U.S. companies are projected to report an earnings contraction of 4.1%, based on analysts’ median estimates in January. That is significantly deeper than the average 1.7% decline over the past 15 years.

The benefit of the Trump Tax Cuts was as fleeting as I figured it would be, while the exponential rise in the US national debt as a result of those cuts goes as far as the eye can possibly see. (Bears were also right that the tax cuts have failed to pay for themselves.) The pressure on bond interest is upwards, curbing the future potential for stock buybacks even as repatriated cash to fuel buybacks also starts to fade.

Many share my opinion that stock buybacks, once mostly illegal, are nothing more than obscene market manipulation:

For much of the last decade, companies buying their own shares have accounted for all net purchases. The total amount of stock bought back by companies since the 2008 crisis even exceeds the Federal Reserve’s spending on buying bonds over the same period as part of quantitative easing. Both pushed up asset prices.”

Another way of saying that is, if you take buyback out of the historic stock market timeline, what remains would have left no growth whatsoever over the last decade. Take Fed money out of the equation as a good part of the fuel for buybacks before the tax cuts, and none of that would have happened.

Moreover, it has been reported many times, including here on The Great Recession Blog, that corporate CEOs and executives do an inordinate amount of trading around their own buyback announcements to their own advantage.

Well, guess what, with cash spending from tax repatriation starting to fade into the rearview mirror and with interest rates rising due to the Fed’s balance-sheet unwind (monetary tightening) and the US government issuing a growing supply of bonds to fund its endless deficits, buybacks will be diminishing until the Fed goes back to quantitative easing and to sopping up (monetizing) the government debt.

My own writing winter has almost thawed, thanks to generous and committed readers for whom I intend to work diligently this year if we clear my goal. The thermometer is now just one mark from the goal I set as necessary in order to continue writing on the economy. Since past is prologue for reader generosity, too, I’m going to venture my second prediction for 2019, which is that readers of like mind will put this fundraising thermometer over the top by the end of February so this writing does continue. How that prediction turns out is fully under your control, and I’ll willingly depart the scene if I am wrong. If you prove me right, I’ll stop making so many fundraising pleas and stay focused on the work of trying to beat the establishment before it beats us all.

500
624
Liked it? Take a second to support David Haggith on Patreon!