Home » Uncategorized » Beware of Good News That Puts Lipstick on a Hillary
« Has a Stock Market Melt-Up Begun for a Stock Market Crash in 2016?
Something Dark Emerges from the Tar Pits and Oil Sands, Destroying Crude Oil Price Rally »

Beware of Good News That Puts Lipstick on a Hillary 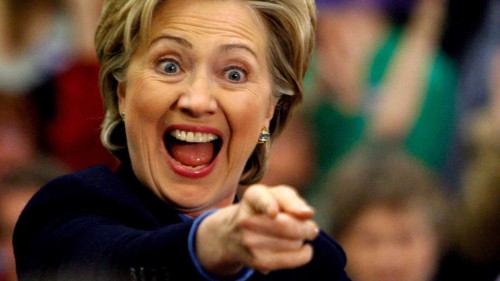 … or hair coloring on Donald Trump. Neither one helps.

Sales may have improved from one month to another only because they fell into a cess pool the previous month, which stank so bad nothing can compare … or because we just entered a month when things always pick up, yet this year they picked up less than in previous years (making it a bad month as things generally go) … or because one story is giving month-to-month data, while another focuses on the more telling year-to-year data.

U.S. retail sales rose more than expected in June as Americans bought motor vehicles and a variety of other goods, reinforcing views that economic growth picked up in the second quarter.

The outlook was further supported by other data on Friday showing that industrial production recorded its biggest increase in 11 months in June on strong manufacturing and utilities output.

That is the story as it will also most likely reverberate throughout the mainstream media, but might the key words be that retail sales rose “more than expected?.” Maybe expectations were so dismal they weren’t hard to beat. And how strong was that June industrial output?

Does the story tell the more important story regarding the same data?

US industrial production may have increased from May to June, but year on year, it fell! Whoa! They left that bit out. This June was actually worse than last year’s June by 0.7%.

Year-on-year, industrial production in the US has fallen for ten consecutive months. June made the tenth, so it extended the slump. That means production may be going up, but it is still behind where it was a year ago, and it wasn’t that great a year ago! So, we remain in a place that is not a good place to be.

Here is the Fed’s chart of what US industrial production really looked like:

You can see that, yes, the year-on year change in production in June 2016 was 50% better than May 2016, but that’s because production year-on-year was 1.4% lower in May, while June’s production was only 0.7% lower. We are in other words, still in the basement. We might be climbing back out of it, but we are not out yet.

Graphed another way, US Industrial production during the past year and half looks like this:

So, yes, June was an uptick from May, but there have been several upticks along this long sled ride into the gulch.

A similar thing is true of the silver lining presented in retail sales. Yes, they improved from May to June. Even year-on-year retail sales have grown about 2%, but that runs along the bottom level of growth we’ve seen during the whole recovery. 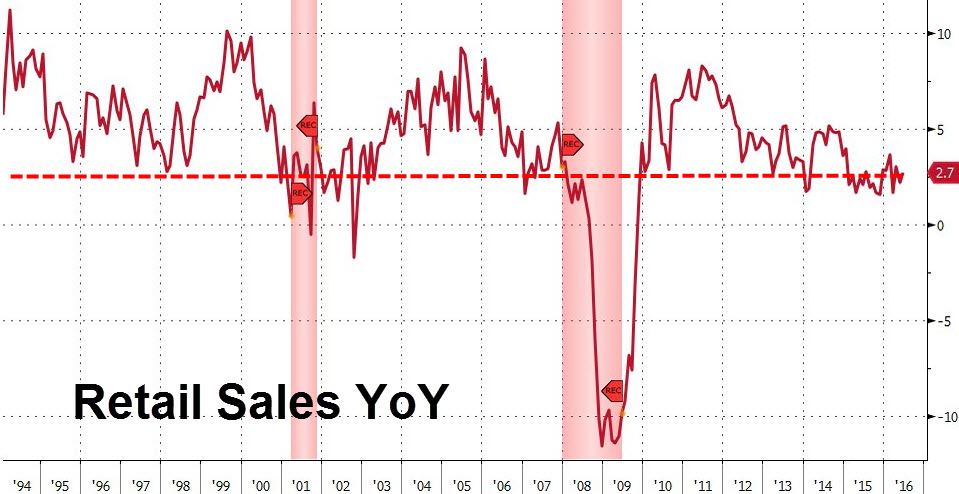 Shown in scale, you can see just how paltry that June uptick was. You can hardly find it compared to others, and it rests on a pretty low bar. You can also see that retail growth did vastly better early in the “recovery” and has been slowly stalling out to a dribble since. June’s ripple in the dribble was, in fact, smaller than most ripples in the dribble. At this point, we’ve stalled to where retail sales growth is exactly where it was in the middle of the official part of the Great Recession and where it was during the middle of the dot-com crash. Not exactly the silver lining that it sounded like above.

US retail sales growth happens to be a fraction better than where growth was last year (and it is, at least, growth), but it’s growth that matches what we’ve seen during two of our worst national recessions. To be sure, at some point in those recessions, growth turned negative (became decline), but June’s number matches what we saw in the first half of these recessions, so it is far from an enviable place to be. The uptick is so tiny that it is laughable that it even gets a comment. It’s barely thicker than the bar it rests upon. 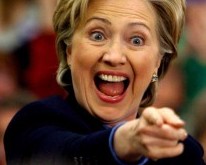 Lipstick on a pig!

I guess any improvement is better than none, but seen in broader context, the story looks a little like putting lipstick on a Hillary. It may be a pretty color, but it doesn’t improve a smile that makes her look like she’s about to eat you.