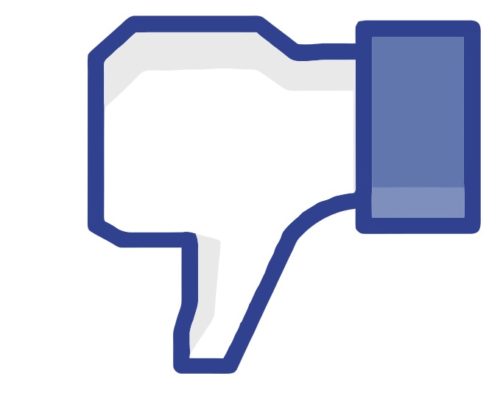 Two of the original FAANG stocks that carried the US stock market higher throughout the Fed’s fake recovery from the Great Recession have revealed in the past week how quickly overpriced, bubblicious stocks can turn on investors and bring a rising index down.

Facebook, which put the “F” in FAANG, showed it knows the foulest meaning of an “F” when its second-quarter report card got graded. Overnight, Facebook lost $150 billion in value, which was a drop of over 20%, putting the stock, at opening, in its own bear market. By the end of the today’s actual trading (Thursday) the stock had settle at down $119 billion (-19%), which still set a record as the worst corporate crash in the history of the US stock market. Pronounced one analyst of Facebook like a referee, “Bears win this quarter.”

Just for perspective, Facebook’s crash today was bigger than the entire market value of Nike, General Electric, Goldman Sachs, Blackrock, Starbucks, Airbus, and several South American economies all combined. The equivalent of the loss of several of America’s greatest corporations and a few South American economies all in one day is truly the hardest fall anyone has ever taken. Those who were feeling giddy about their retirement funds being invested in tech stocks yesterday might not being feeling quite so giddy today.

If you were still heavily invested in tech stocks, you cannot say you did not get plenty of warning here. And, as one writer wrote today, “It’s not too early to be late” in getting out. Or you can wait until it gets more interesting if this individual corporate cliff-dive wasn’t enough of an adrenaline rush for you.

Showing how easily investors have been beguiled into thinking what goes up can never come down, one analyst described Facebook’s announcements as “bombshells.”  The extremely foul report led many stock analysts to seriously and instantly downgrade the stock. The essence of the report was that …

The company said late Wednesday profit margins would plummet for several years due to the costs of improving privacy safeguards and slowing usage in its biggest advertising markets…. Facebook also warned that the toll would not be offset by revenue growth from emerging markets. (Newsmax)

I, on the other hand, would ask how investors and especially analysts did NOT see this coming. Facebook has been rocked with scandal throughout the past quarter and pressed by the US government to spend billions in policing its content in an attempt to regulate free speech, to which Facebook has capitulated, rather than risk the wrath of government. It’s also been cornered by the EU government. Facebook had even notoriously failed to protect the privacy of its users, whose private information was used for political reasons. As a result of losing face so many times on major issues, Facebook wound up reporting a drop in growth and sales.

Apparently Mark Zuckerberg has been reading this blog, too, given his own personal sell-off of Facebook stocks:

Maybe someone should have been paying attention to what the insiders were doing with their company stock. (That, of course, is a big part of what all these buybacks are about — using company money to buy yourself out before things crash.)

Or maybe Zuckerberg was just paying attention to same obvious signs everyone could have seen. It didn’t take insider knowledge to know Facebook was in trouble. Who could not have seen a drop in customers or ad sales as being a high likelihood in such a swirl of high-level government controversy? It’s just another blatant case of economic denial, where the signs of trouble were written in blood-red ink all over the stock, but analysts continued to live in the opiated dream that all was well because Facebook Never Fails.

But, then, look at the number of investors and their advisors who think the NASDAQ isn’t going to fall and who claim that is because they are acting and thinking differently this time than investors were during the dot-com crash. The hard part for investors with the present report was having to ALSO hear that the numbers aren’t going to improve for years! How often do you hear a company admit that much bad news in its outlook?

“I think many investors are having a hard time reconciling that deceleration,” Brent Thill, an analyst at Jefferies LLC, told Facebook executives, asking for a little more clarity on the reasoning. “It just seems like the magnitude is beyond anything we’ve seen, especially across a number of the tech (companies) we cover.” (Bloomberg)

Apparently Thill and his clients don’t read this blog, or they all would have been on high bubble alert, while Thill and other advisors would have been probing into some rather obvious dark corners in order to see what was coming. I mean how do you not see the fact that Facebook was squarely in the crosshairs of the Russiagate hoopla as possibly being a dark corner?

Another analyst said the real problem for Facebook is that “The core Facebook platform is declining.” He pointed out that advertising revenue has reached its limits; so even it were not beset by problems that hit its profit margins, Facebook has grown to where it has likely maximized what it can do with ad revenue, which is where it makes all its money, being an otherwise free platform.

That analyst gave three reasons as to why FB revenue will decline in the future: “currency headwinds, greater investments in new kinds of content-sharing, like disappearing videos, and greater user control over privacy.” I assume that he includes within the latter, ad blocking, which is what makes revenue on my own tiny blog difficult to come by (and I cannot complain because I use an ad blocker, myself). Of course, in trying to be politically correct in order to appease an enraged Republican congress, Facebook blocked a lot of political advertising (and content), making itself far less useful to those who value uninhibited free speech and who think the burden is on the reader to filter truth from falsehood on free public platform. (I know I certainly don’t trust Facebook to filter the right news out as “fake.” Maybe it should change its name to Fakebook for pretending that it can do the job justice.)

For a company that rarely stumbles, Facebook fell … well … flat on its face.

Just about a week ago, you may recall that Netscape put out a similar dunk-tank report and saw its stock take the plunge. With only five FAANG stocks being responsible for the entire stock market rally since the Great Recession, such horrid and UNEXPECTED performance by two of the five reveals how vulnerable the NASDAQ’s heady performance really is. (By saying they are responsible for the long rally, I mean that, if one took them out altogether, the market would have remained down through most of that time, as there were often more losing stocks than winners during that long rise. It is not that there were not a lot of other winning stocks but that the performance of the leaders so outpaced everything else, that removing them would leave no momentum.)

When was the second largest individual stock crash in history, and who was it? It was when Intel crashed during the dot-com bust! Ahem! Sure this time is different! Moreover, if you compare Facebook’s wipeout to the next eight worse individual stock crashes in history. All of the next eight (with an exception of Apple) crashed in the dot-com but in 2000 or in the financial crisis of 2008 that started the Great Recession. It is those kinds of environments that these kinds of events take place.

And, speaking of Intel, on this same day as Facebook lost face, here was Intel’s big headline of the day:

Today’s Intel drop happened because Intel’s second-quarter growth (the vaunted big second quarter that Krazy Kudlow and the rest Team Trump are already boasting about) came in below estimates. In other respects, its report was fine, but it dropped anyway.

So, sure there is no chance the NASDAQ could fall in another dot-com bust! Faceplant’s performance this week tells us otherwise, and Netflix proves that these failures to perform even to a company’s own forecasts are not just a one-off. For Netflix, the huge gap between its growth projections and its actual growth slammed its stocks, but this happened as Netflix is foreseen as losing ground to competition, too. That’s twice now that FAANGs have failed “big-time” in reporting for the second quarter of 2018.

As a result, traders now appear to be rattling out of tech stocks and into industrials. To almost the same degree that the NASDAQ plunged today, the Dow rose, though it is still well off the high it fell from last January and February. Tech stocks dropped as a sector by 1.6%.

Let’s Face it, when you’re riding a five-engine jet straight up into the heavens and two of your five engines fail, things get a little nerve-wracking.