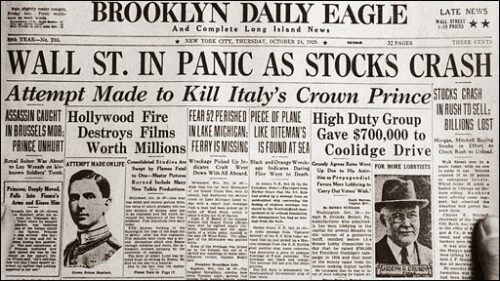 Today’s crash wiped out almost the entire Trump Rally, going back to the day “The Donald” was elected President of the United States. The stock crash, rolling through our days like late-summer thunder, is a daily headline now, each day unimaginably worse than the record day before!

Charts can’t even keep up with the action. Because I couldn’t initially find one that matched the actual close, I had to draw a red line at the point to which the market actually plunged today:

With today’s market flushing in response to everything Trump and the Fed had to say and do last week, the market has in less than one month stripped away Trump’s biggest boast throughout his tenor as president. We are back to where we were just a few days after Donald Trump was inaugurated. His badge of success has been annihilated by a tiny virus. He can no longer gesture back and say, “Look at what I, the Mighty, have built!”

If you got your money out of stocks, as I hope my economic projections helped profit you to do, you can comfortably pull up a camp chair next to me on the cliff edge beside all these waterfalls, and we’ll watch all the screaming bulls ride together in their single banged-up canoe over one waterfall after another.

Here’s a beer. Enjoy the entertainment from the sidelines as the “Greater Fools” go over cascade after cataract. Glad it wasn’t us! Instead, we watch the bullheaded ones continue to think each fall will be their last, and then they can “buy the dip.” In fact, many of them are buying the dip each time. That’s how we get the bounces along the way down. I hear their mantra now as they head over the next fall. “Buy the diiiiiiip” as their voices fade over the edge.

When they are all meatloaf in a pool of blood at the bottom and their boat is a pile of sticks on the shore, we can portage down to the waterfall’s base, slip into the stream and buy the bargains back up! It’s nice to have all cash on the side at times like this. Greed keeps it all in play for “fear of missing out.” Prudence puts it in your pocket.

I can’t feel sorry for them. Anyone who couldn’t see when China was falling apart economically that the already dawning recession in the US was going to gape into a bottomless pit as soon as the virus began to spread across America, deserves all the misery that comes upon them for having not taken the numerous warnings of the bears. The bulls scoffed at the bears even as circumstances were playing out right in front of them!

Such is bullheadeness — all because they were dogmatically addicted to a single strategy. And we are not at the bottom yet! Today’s waterfall, however, looked especially spectacular from the bear seats on the side of the cliff. And the screaming of the bulls as their little canoe flew over it would have been hilarious if not so frightening for them. (I guess I do feel a tiny bit for them.)

Enjoy the plunge, bulls! (Since I know you are already preparing yourself for the next.) Meanwhile, My Fellow Reader, have another beer and join me in the Great Bull Bash!

Here’s where we are economically already

It didn’t take long for the statistics themselves, not just the projections, to become all-out disastrous. The Empire State Manufacturing Index plummeted today into an open mine shaft someone dug in the bottom of the sub-basement of our economic house of cards, which is deeply riddled with flaws that I am describing in other posts I’m writing — so much so that the ultimate collapse will be unbelievable.

We haven’t even seen the bond failures begin to spectacularly emerge. That is what I was writing to warn about before the market took today’s plunge over Bridal Veil Falls. Economists expected a print of +4 on the Empire index, and got -21.5, instead, a level the index hasn’t hit since the gaping belly of the Great RECESSION, so clearly that is where we are.

And that was for a month (February) when the US was outside of the coronavirus pandemic for half of the month! Wait until we get into a full month of pandemic, and the job layoffs have begun in earnest. And then the bond bubble implodes and starts taking down banks. (That article should be finished and published either later today or first thing tomorrow morning.)

I’ve taken a moment to deride the bulls because their foolish greed in praising everything Father Fed did and chasing the market up far above the economy is why the market is now falling so hard, as I said back in January would happen. The bulls and those driving herd on them did everything they could put their shoulders to with stock buybacks and record dividends to lift the stock market far beyond what business on Main Street merited. Because greed ran wild, the US and the world are in for more hurt than people ever thought would happen!

Here is what I wrote in January:

Today, the Fed is back to easing — back to doing what it does to juice markets up. And the correspondence between what central banks do with their balance sheets and what the stock markets do is now almost 100%….

The Fed, of course, is the primary mover for the US market. Therefore, US stocks being overpriced in the extreme may not matter so long as the Fed is willing to keep the money pumps redlining at maximum RPM.

However, the more the market’s metrics move above all rational and historic benchmarks, as I’ll show they now have, the greater its fall will be…. So, the situation is, in that sense, more perilous than at anytime past because some of the market’s most fundamental valuation metrics are now printing at levels never seen before.

As I will lay out in my next Patron Post, the Fed has given some indication of a mild return to tightening in the near future, and that could create problems for the market. The Fed has not, however, laid out any clear schedule for tightening, and it won’t get far down that road before it sees market problems, and goes right back to easing because we are now in QE4ever by which I really mean “QE4ever or die!”

…the case to be made against the market is huge — as big as it was before the last two major recessions. The market today looks in almost every way like it did just before the dot-com bust.

“Stock Market More Overpriced and Perilous Than Anytime in History“

I posted statements like that to warn people at the end of permabull articles on other sites where I was roundly laughed at and criticized by the sites’ buy-and-hold authors who thought I was full of utter nonsense. They whipped out their chart magic to prove it wasn’t so. Nothing I said for two months after that could drill through their bullheaded skulls, even after the market started to go down. Now their stock market is a stock yard where you can buy their slaughtered carcasses at half price, hanging on a hook.

We have entered exactly the world I have long said we would be in when the next recession hit — one in which the Fed is COMPLETELY impotent! (That, too is coming out in an article I’ve already started working on. So much to cover in the time available.)

Hopefully, you’ve taken the opportunity this site tried to persuade you toward to protect yourself, though I offer no specific investment advice. If so, it’s time to crack a Kokanee and camp. Sit beside me, and we’ll watch the run of the bulls over the falls.

(Hope I can sleep tonight over the noise of the balling of the bulls.)

Speaking of which, I’m starting to miss the cawing of my crow — the one who sat on a wire and scolded me over how the market would rise until the moon, itself, rose no more. I hear there will be a nice moon out tonight — a full one, mooning the bulls who bought and held.

But, then again, he would never have been honest enough to return here and admit that he was birdbrained and badly damaged anyway.

So, to the bulls! Long may they fall until there are bargains for all! Maybe then we’ll learn not to scaffold out over fantasy falls, but to build on bedrock reality.