Home » Uncategorized » BOND PRIMER: How the Fed’s Machinery Works
« Why are Bonds Going for Broke?
Fed Loses Control of its Benchmark Interest: Repo Rates through the Roof! » 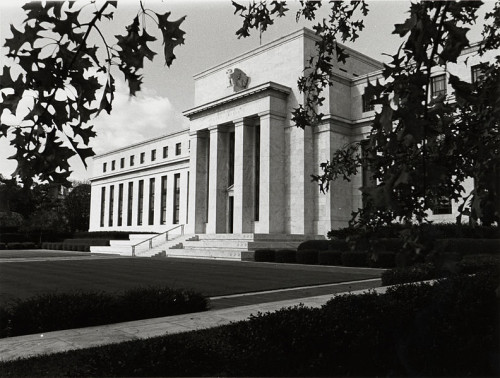 [This article attempts to provide an understanding of how the Fed governs interest rates (particularly via repos). If you understand it already, skip it; if you don’t, you may need it to understand the next article.]

The Federal Reserve’s primary Machinery — the overnight interest rates between banks — broke down this past week. That machinery manipulates the rate banks charge each other when loaning cash to other banks for twenty-four hours so they can reconcile all their transactions at the end of the day if they are short on cash they need to transfer to other banks.

These overnight loans from bank to bank are collateralized with securities. The receiving bank puts up so many millions in US treasuries or mortgage-backed securities as collateral against a 24-hour loan, which they promise to pay back in cash with interest. When they pay it back, the securities are released. That’s one way banks make use of the US treasuries they hold, making them the next-best thing to cash in their reserve accounts at the Fed.

The Fed’s target rate is just that — a target. The Fed has no direct control over the rates banks charge each other for overnight loans, but it has some strong mechanisms in its machinery for manipulating those rates to try to keep them in its target zone. Because it does not have the authority to simply mandate an overnight interest rate for banks, it always states a narrow target range within which it will try to keep overnight interest.

There are only a few gears in the Fed’s machinery, which it often calls its “tools” that can raise or lower overnight interest. One is the total amount of money the Fed creates in the entire monetary system. That’s the big tool. Another is the buying or selling of treasuries on a temporary basis, as I’ll describe below. The third is the interest it pays banks to maintain reserves in excess of the amount the Fed mandates the banks hold. I suppose a fourth gear or “tool” would be changing the amount of mandated reserves.

The machinery works on this principle: When banks have plenty of excess reserves to loan, there is more liquidity between banks, so they don’t demand as much interest for loaning out some of their excess reserves. The rate at which they loan out their excess reserves overnight affects many other interest rates that hinge on that particular base rate. So, it is really the nation’s truest prime lending rate.

The overnight loan machinery clogs up when banks start running low on reserves or if they for some reason have excessive transactions. When their reserves are close to their Fed mandates, they are not inclined to loan to each other because their own sudden needs may put them out of the Fed’s bounds. That means the banks that need to borrow to complete their end-of-day transaction have to up what they are willing to pay to get the limited funds that are available as banks compete against each other for those loans.

The Fed also governs the rate by how much money it creates in the entire monetary system. This is why it refers to taking money out of the economy as “tightening” because, the less money there is floating around in excess reserves, the more the whole economy tightens up because banks get tighter with their own money in order to make sure they have enough cash to complete their own daily transactions (savings withdrawals, checks, etc.).

The Reserve Bank of New York is assigned the mandatory task of implementing the directives of the Federal Open Market Committee’s (FOMC) monetary policy decisions. If it is ordered to move the overnight rate for loans collateralized with US treasuries into a lower range, it creates money via cash injections into the monetary system to buy treasuries from banks. It does this via something called a “repurchase agreement” (a “repo”) through the reserve accounts of the few banks that are primary dealers in US treasuries.

In repurchase agreements that happen outside the Fed, one entity approaches another saying, “I will sell you this security that I own now for this much money, and then I will purchase it back at a set date for the same price plus some interest.” It’s called a “repurchase agreement” because the seller of the security is obligating itself in its offer of sale to buy the security back at a set date and price.

Such agreements can be transacted through an auction where the contract is offered to many entities, and the price is determined by bid on the open market with the offered interest added into the repayment amount. So, the interest is set in the offering, but the price someone will pay to get that interest over that term is determined by auction. When it is initiated in reverse — someone offering to buy a security and then promising to sell it back on a set date at a set price, it’s called a “reverse repo.”

There are two key differences when such agreements are carried out by the NY Fed. The first key difference is the creation of money. To implement the FOMC’s target rate, the NY Reserve Bank, says to its primary treasury dealers (a select group of large banks — currently there are fifteen — that are authorized to buy bills, notes and bonds directly from the US treasury via their NY Fed accounts), in essence, “We will buy securities from you and will create money in your reserve account out of thin air in the amount of those securities’ open-market value; then at a set time, you will buy them all back from us, and we will deduct that same amount of money back out of your reserve account, evaporating it back into thin air.” That set time is typically twenty-four hours later. One of the requirements for being a primary treasury dealer is that dealer banks have to participate in these arrangement when the Fed says they have to.

The second key difference is that, whether it is called a “repo” or a “reverse repo” is stated from the perspective of the primary dealer. While the Federal Reserve Bank of New York in essence initiates the action by announcing its intent to buy securities and sell them back at a set date, that is merely an offering of intent. It then waits (seconds or minutes) for banks to auction repo agreements to raise the overnight cash they actually need. Thus, the primary dealers auction what they need on the open market, and the Fed soaks up as much of that auction as it stated it will (if there is that much to soak up).

As a result, the NY Fed may offer to buy more repo agreements than wind up being offered, or its announcement may fall short of the need. If the former happens, no big deal. The Fed just doesn’t have to do as much as it was willing to do. If the latter happens, interest may remain higher than the Fed wants. It is in that sense that the Fed calls all of this an Open Market Operation (OMO), as banks are free to sell via repo agreements with other banks. The participation of other banks can affect the amount the Fed winds up paying for the agreements, but the Fed’s participation as the biggest player of all affects what the other banks end up paying. So, it manipulates interest within the open repo market as the biggest fish in the pond.

By creating massive demand, the Fed hopes to get the cost of those repos down for its member banks. That affects, in turn, the overnight loan rate that runs right alongside of all that action, since overnight loans are accomplishing the same overnight funding needs with banks that are not primary dealers. Thus, the Fed states these repo agreements are its equivalent of overnight collateralized loans because what happens in these primary repo auctions trickles down that same night to affect the interest rate of overnight loans — attempting to keep them in the FOMC’s stated range called the “Fed Funds Rate.”

I’ve tried to spell this out in detail here because there are complicated interactions involved in accomplishing the Fed’s interest objectives, which is why I refer to it as “machinery” and not just a “tool.” The Fed is using one thing to manipulate interest and liquidity down the line in a sequence of rapid interactions … like gears.

There are two types of OMOs — permanent and temporary. Permanent purchases are simple, outright purchases of securities in that they do not include repurchase agreements. They are carried on the Fed’s balance sheet in a fund called the System Open Market Account (SOMA), which is also managed by the Federal Reserve Bank of New York. Thus, the NY Reserve Bank is the biggest player among the twelve reserve banks in the Federal Reserve System. For that reason, it is the only reserve bank whose president always sits the Fed’s Federal Open Market Committee. Others rotate on and off.

When done on a large scale, these Open Market Operations have been called “quantitative easing” because their intent is to ease the flow of money in the overall economy by injecting massive quantities of new money. The temporary OMOs are made temporary via repurchase agreements and might not even appear in statements of the Fed’s SOMA account because statements are weekly, and these transactions typically only exist for twenty-four hours. If I were to coin a term on the Fed’s behalf, I would call them “flash cash.”

When repo agreements are conducted by the NY Fed, new money flashes into the monetary system to meet an unexpectedly large financial need because the major dealer banks do not have the capacity to meet that need (which was what caused rates to spike this past week), and then the money flashes right back out of the system on schedule. The rest of the Fed’s member banks participate if they need to via overnight loans from the dealer banks.