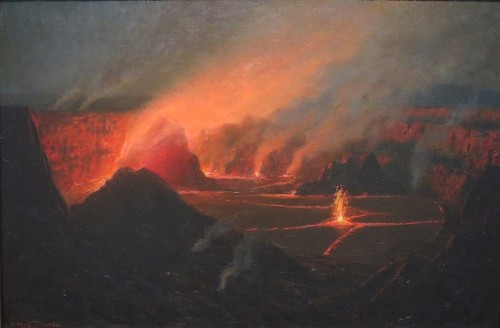 At long last the tyranny of the global financial elite has been slammed good and hard…. The British people have rejected the arrogant rule of the EU superstate and the tyranny of its unelected courts, commissions and bureaucratic overlords…. Smaller government—–at least in geography—–is being given another chance. And that’s a very good thing because more localized democracy everywhere and always is inimical to the rule of centralized financial elites. (David Stockman — Contra Corner)

Stockman’s lucid thoughts reverberate like an echo in current time to something that I wrote back in February:

Britain is now debating leaving the European Union, making Brexit as big of a deal as Grexit. With the growing flood of immigrants through Europe, working its way to Britain, the British exit is gaining support. More economic disintegration within the Eurozone will certainly strengthen the case for a little more separation from the European Union…. So, Europe is its own volcano, ready to break apart on all sides…. A worldwide eruption, which I call the Epocalypse, will shatter the landscape — is already shattering the landscape…. You might not like the prediction (I know I don’t), but it doesn’t matter if you like it (any more than it matters if I like it). I’m not looking to see what I want to see; I’m looking to see what is, and reality doesn’t care what I like. It doesn’t ask me what it should be. Those with eyes wide open will see the fissures that are opening up everywhere, and that will give them the outline of things to come. So, you can see what is coming…. it is those fissures that the Epocalypse will burst open. Humanity will be forced to face its flaws. (“Hell Week for the Global Economy“)

The biggest single rip in the European fabric that could happen has happened, forcing all of Europe to face its flaws. As I’ve said all along, Europe’s leaders, like Merkel, were blind to the stresses they were creating with their immigration policies and central planning. I have maintained that, because of their blindness, those stresses would continue to build until the volcano blew and have said this would be the year of the great rupture.

You have two major factors in Europe’s eruption — the building pressure and all the fractures that made it too weak to contain additional pressure. The pressure most pointed to was immigration. The fractures were its economics, broken by design and overstressed by previous failures. The blindness that seems inevitable with large centrist political structures also played a major role. Some event like Brexit could easily be seen coming — if not the exact event itself — but its leaders failed to see this and so continued to push self-anhilating policies like a council of masochists. Merkel, who seams to wield almost autocratic authority over the EU even though she is not its president, might as well have been hammering her own head with the gavel.

When you see the sides of the volcano bulging and cracking, you know its eruption is imminent. That was a big reason my own economic predictions placed a worldwide economic apocalypse — the Epocalypse — as happening this year. The explosion in Europe — apparently unexpected by many who are now scrambling to recover from a market that priced in a British “remain” vote — seemed inevitable. The fact that it was Brexit first and not Grexit means the eruption is more like the Yellowstone super volcano than Mount St. Helens. One of the biggest pieces of the EU broke off, not one of the smallest.

Socio-political disconnects are everywhere: The “leave” decision is about much more than a narrow majority of citizens refusing to follow their political leaders. It should be seen as a notable rejection of the political and business elites, as well as “expert opinion.” And it also illustrates the regional divides that prevail following a period of low growth, especially growth that has benefited some groups more than others…. The Brexit referendum decision ended up boiling down to a gross oversimplification — one that pitted economic wellbeing versus regaining sovereignty over immigration…. The “leave” vote is likely to embolden the anti-establishment movements that have already been gaining traction in much of Europe. (Newsmax)

The fact that this explosion could easily embolden other outraged people to blow out more sides of the EU is the main reason the central planners of Europe are worried and enflamed. Angela Merkel overplayed her hand on immigration (and many other things). So, on Thursday, she got her hand chopped off when one of the biggest regions of the European Union declared it has had enough. Like leaders in the US, Merkel was quite simply too insensitive toward regional concerns about rampant immigration, believing she knew what was best and that all of Europe would go along with her endlessly stuffing millions of people from diverse cultures together in tiny countries.

The British Exodus could easily create an undertow that sucks up and flushes other nations away from the EU like falling into an active lava tube.

Another positive — for I see the British courage to break away as hugely positive — is that this injury to European globalization will seriously neutralize the central powers that be. (Not that they will not all return to centrist answers — as that is all they are capable of envisioning — but it’s good that they’ve been challenged with a direct hit to their blind courage.) Now that they know major portions of their economy can and will cut themselves off, they won’t feel so empowered to force their dictates upon failing economies like Greece, Spain, and Italy. They now know they are far, far, far from immune to a mass uprising against their poorly painted dreams.

Interestingly, as hard hit as British banks were in the first day after the Brexit, European banks got hit much harder. Europe is roiling more from the British exit than Britain because this is an existential threat to the European Union by virtue of its absolute proof that the EU can, indeed, explode.

France, the Netherlands, Austria, Finland and Hungary look a little dicy in their attachments, too:

Even the major pushers of European unification are showing that Brexit is a disaster for Europe that threatens its existence:

If this is an existential crisis for Europe, as many are saying, this makes Brexit a euro crisis, too, and maybe the beginning of the end for the European Central Bank that controls the euro — at least as we now know it. The ECB’s greatest challenges are now before it, rather than behind it. At a time when it must be nearing exhaustion and has already gone into what bankers are calling “negative interest rates” to no positive effect at all, following years of quantitative easing, the ECB suddenly has numerous bigger problems dumped upon it.

My contention all along has been that the pressures for great economic collapse are building just as the capacities of central banks to do anything about those pressures are already greatly over-extended. This, I’ve said, is the year it all falls apart. All nations enter this messy breakup period far weaker than they entered the Great Recession.

For every reaction there is an equal and opposite action

I expect the Eurocentrics to launch a verbal counter assault against the Brits as they try blame the Brits for every financial whoa that befalls the earth. I suspect many Eurocentrics will refuse to see Brexit as a failure of their own ideas but see it (or, at least, spin it) as a failure brought about by those who rebel against their globalist ideas — never mind that the swelling pressures from European unification have been plainly evident for years.

Expect the plate spinners and spin doctors go to work in the days ahead. At the moment, we have the moaning of the globalists, who are mostly admitting that a big part of this eruption was due to rampantly stepped-up immigration policies; but that is because this has thrown them off balance and because focusing on the immigration component helps keep eyes off the failure of globalism itself. First comes disbelief, then outrage. I am hoping, however, that the shear magnitude of the failure will leave then unable to paint this as a problem the UK caused.

You have to wonder why Eurocentrists were so incredibly blind that they didn’t see this reaction coming as they continued to push the throttle forward on immigration, deep into the red zone. Perhaps their eyes are twisted to the topside like a flounder’s, so they cannot see what is happening right beneath them. That’s where anti-democratic central planners always fail. They fail to see the pressures and problems in the ranks below because the apex of power is too insulated.

To put it another way, globalism will ultimately fail due to its own cumbersome size. The center of power is out of touch because it is too far from the periphery. More localized structures work more efficiently and effectively.

The falling apart of Europe isn’t happening because a people rebelled against European unification. It’s happening because the EU was deeply fractured in its origins and then conglomerated together by mud, so it was easily breakable in the first place. When it wasn’t the Greeks, it became the Brits. If not the Brits, it would have been the Spanish or the French or… (It’s a long list of likely breakaways.)

Europe’s fault lines widened under the Great Recession and deepened as a result of recovery solutions that eroded out grooves of debt beneath the fault lines. The EU lost any resiliency it might have had, becoming brittle as result of all of the debts that it socialized and overpressured as a result of its leaders stuffing divergent outsiders into the union. Deaf to a rising chorus of complaints, Europe’s leaders believed the masses would endlessly adjust and continually do as dictated. Or, as Mohamed El-Erian summarized:

Artificially-elevated financial markets were at the risk of either a policy disruption or a market accident. Brexit could well turn these two risks into reality.

Exit-stentialism — Running for the EU Exits: