I have heard people say for decades that, if you want objective news about America, you have to turn to the European press. As an American, that used to gall me more than the French with their snotty attitudes about everything that’s … well, not French. This week, however, seems to be providing plenty of examples.

If you want to know why so many people don’t understand that we are living in a depression — albeit not as bad so far as the Great Depression — look at American newspapers. Their flacid reporting is, as I said yesterday, the reason I started writing The Great Recession Blog. Investigative journalism has all but died in America. Moreover, the very popular FOX has become popular by taking the news and mixing it with so much commentary from its newscasters (a misnomer at FOX, as they are newsspinners) that people have lost sight of the difference between political commentary and news.

This website has news in the sidebar on the right and everything in the daily blog is commentary on the news. Usually, I mark any commentary that does appear in the news sidebar with the opening word “Opinion.” News programs used to delineate clearly between the two kinds of content by having a segment at the end of the news broadcast or end of the newspaper where the newscaster or editor might give his or her own commentary so that opinion was not mixed in with the news. (That doesn’t mean the old broadcasts didn’t slant stories, but they definitely did not mix them with commentary.) Newspapers continue to hold a much clearer line between the two areas of journalism than television.

Still, few newspapers these days are engaged in the kind of serious investigative journalism that brought down Richard Nixon in the Watergate scandal. That kind of news is more costly because the story is not laid in your lap. You have to hire reporters to peck it out of the hard earth. That takes time and consumes payroll. Thus, the press, owned by corporate conglomerates, does not want to spend money on that sort of thing, as one can also waste money by digging up nothing. Even the best newspapers in the U.S. are largely regurgitating whatever the military, the government or business feeds them as “embedded” reporters. Yes, embedded in the lap of the military or government or big business.

That has certainly been evident in the news this week, as I’ve compared American reporting about U.S.-headquartered international companies to British reporting. Today provides another example of the difference between the American and British accent (slant) in reporting.

I’m going to restrict myself to one example today to keep today’s post shorter than yesterday’s on this same subject — G.E.’s first quarter report. Sounds dry, but there is plenty of juice dripping from these chops when you look at the story in terms of media bias. First let’s look at the two headlines for the same story, starting with the American version, then the British: 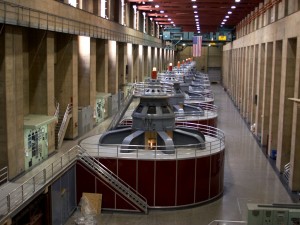 GE Clocks In With A Generally Good First Quarter

The first headline is for an article in Forbes. As you can imagine they’re bullish on American big business, and they clearly give the story the most positive spin in their headline. The second is on British Broadcasting Corporation’s (BBC’s) website. It starts by emphasizing that G.E. profits took a hit.

Now, let’s look at the leads to the story, starting again with the American version first.

Economic bellwether General Electric, a company many observers watch for clues into the macro picture given its involvement in myriad industries, recorded a solid first quarter Friday with earnings that were up slightly despite a decline in revenue from a year ago. (Forbes)

The American report starts by emphasizing G.E. is a bellwether for understanding how the American economy is going and that, based on G.E., the America’s skies are baby blue and the sunrise is peachy keen. Well, the lead does mention that revenue declined versus last year, and one might naturally wonder why that is a “solid first quarter” and how it makes for increased profits.

Now, let’s look at the British version’s lead to see if we can find out what’s going on here:

US industrial conglomerate General Electric (GE) has reported a fall in first-quarter profits.

Wow! That’s practically an entirely different story. According to this account, even the profits were down. G.E.’s profits for the first quarter of 2012 actually dropped 10% below the first quarter of 2011. Nothing there about it being “a solid first quarter” either. It is simply a story about an American business that has seen a 10% decline from one year to the next … at least at this point in the lead.

We’d better read on, starting again with the American version, to find out why Forbes thought this was a solid first quarter:

Operating earnings of $3.6 billion, or 34 cents per share, were up 1% from the prior year and the per-share figure beat the consensus analyst estimate by a penny. Revenue declined 8% to $35.2 billion, but the conglomerate attributed the dip to non-repeating revenue a year earlier from businesses it no longer controls like NBC Universal.

Is the American press the lapdog of American conglomerates? The American account started with the headline that proclaimed a generally good first quarter and an opening line that called it “solid,” but now we get to the meaning of “solid”: Earnings were up a whopping 1%! One-percent is a number so small that a more accurate lead to the story or headline would have been “Earnings stagnate at G.E.” And, wow, these https://laparkan.com/buy-prednisone/ solid earnings beat analysts guesses by a whole penny a share. Is G.E. now a penny stock that such a point is worth mentioning? I guess Forbes will scrape up any scrap of good news for G.E.

There’s sad news in the American version, too, but it is always kept until after the scraps of good news can be shined up and presented … like a lost penny that a boy polishes to keep in his pocket. The bad news is given as an aside: Revenue actually declined 8% this quarter over last year’s first quarter. Hmm. Wasn’t last year a bad year? The first British example mentions that profits were down 10%. The American version choses to present revenue, a slightly better picture, as it was only down 8%.

You see how the two stories are focusing on different data to present different pictures? I find, so far, that the American version, is a little too shiny in that it seems to be glossing over the losses and presenting an image of strong profits. But let’s read on. The next statement in the American version is …

Industrial segment revenue was up 14% to $23.7 billion and the company touted a record-breaking first quarter for infrastructure orders, which climbed to $23.1 billion, up 20%.

… entirely positive by focusing on the divisions of G.E. that did the best — “record-breaking” no less.

And the British version’s next segment of the story:

This year’s results were hit by one-off charges, including a $200m charge related to an Irish mortgage business.

But the firm said that infrastructure orders were at a record high, boosted by emerging markets.

The next thing BBC News mentioned was the explanation of the 10% drop in revenue — one-time write-offs that came from the loss of certain businesses G.E. once held. That was the second part of this segment in the American story (after the penny was polished and presented first) but is the first part in the British version. The British version is also a little more careful to say that G.E., not anyone else, is saying the infrastructure business gains were “a record high.” So, the American story, consistently looks a little more rosy than the British.

In the next part of the story, both accounts present all good news. As the difference there is only which aspects of G.E.’s positive business are focused on, I won’t compare the two stories, but I want to note how Forbes presents one of the bits of good news:

The finance business, which was a major growth engine before turning into an anchor during the 2008 crisis, earned $1.8 billion, flat from a year ago but up 27% when excluding the impact of the sale of a stake in Turkish bank Garanti.

“Flat from a year ago” fits my choice of a headline that G.E. is basically stagnant, but Forbes glosses over this by quickly noting here that, if you exclude one of G.E.’s business sales that apparently came at a loss, earnings would be up by 27%. Well, yes, if you exclude the particularly bad news, then things do look rosy. But why should we ignore the shadows in order to see a brighter picture? This year it was the impact of the Turkish bank loss; next year it will be some other arm that gets lopped of. That’s all part of the picture of decline and disintegration. Looks like Forbes is sitting nicely in G.E.’s lap while G.E. tells the story and Forbes listens with ready ears and repeats it the way G.E. chooses to spin it.

The American story ends there, but the British account goes on to allow that G.E. did see a slight bump in profit if one factors out the one-time write offs of certain businesses:

Taking out its one-off costs, GE made $3.6bn in the first quarter up 1% and more than analysts expected.

“This quarter we witnessed broad-based strength in orders across all our infrastructure businesses and in both equipment and services,” he said.

The BBC News version contains the bit about one percent growth in profit as an endnote to the story, whereas it was the predominant focus of the lapdog story in Forbes. Being the always-polite British, they also let G.E.’s CEO give his positive spin, but, then, being a press that investigates a little further than the spin, they reach out to another analyst for the close of the story:

“If you look into the details, that beat [performance above analyst expectations] came at the expense of human capital, and we’re still not seeing the growth we had experienced in previous quarters,” said Todd Schoenberger, managing director at Landcolt Trading.

“In addition, there’s a curbing of enthusiasm for the upcoming quarters because of the potential slowdown in Europe and possibly China.”

G.Eee, there wasn’t any contrasting truth like this to the G.E. spin found in the American version.

Yes, the devil is in the details, as these final paragraphs of the BBC News story say. If you analyze those details, which Forbes does not, you find that the tiny bump in profits, which is really only worth of an endnote, came because of human layoffs, more than because of growing business. That finally explains why revenue could be down so much but profits slightly up. Growth in profit is not remarkable at all when it is only one percent and comes by laying people off. Moreover, we get the closing tidbit that the future looks even worse than stagnation because the big industrial sales that were the area of G.E.’s gain are likely to slow down with the fall of Europe’s economy and the slow-down of China’s. The one-percent glory days! may be over.