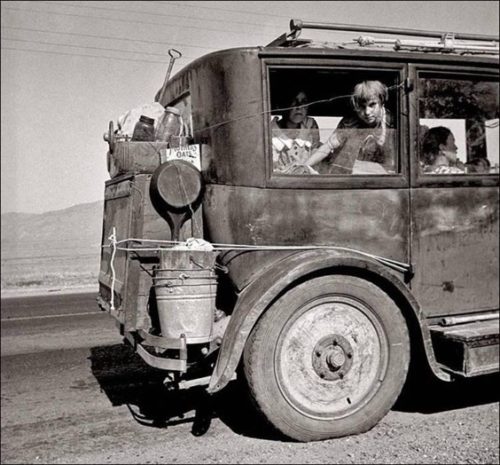 “‘Everything Is Under Scrutiny: 38,000 Layoffs Across Auto Industry May Only Be The Beginning“

Bank of America Merrill Lynch analyst John Murphy said: “The industry is right now staring down the barrel of what we think is going to be a significant downturn.

If you’ve been reading here regularly, you’ve been seeing “Carmageddon” coming for a couple of years. This continuing dust storm of news is the fulfillment of everything I’ve been saying about autos during that time.

Right now I’m witnessing how unusual these times are. I live near one of the oldest Ford dealerships in the world. It predates the Great Depression and weathered through that harshest of economic periods. It weathered through the Great Recession, too, when I was living in Hawaii and saw numerous longstanding dealership of several brands go out of existence.

In fact, this dealership is so old it predated World War I and managed to survive both world wars. You may recall the Second World War included a temporary end to consumer auto manufacturing in the US as all production was mandated to go to producing military vehicles.

It now appears that this Ford dealership is about to go out of business — nothing official said — but a drive past its lot shows it has gone down from a typical 150 to 200 vehicles (not a big town) to about twenty; and talks with two of its employees say sales dropped last month to two cars a month, both made by a single salesman. The general feeling among employees is that they haven’t got much time left, and they have begun looking for other jobs.

You may also recall from the Great Recession that the two non-financial industries hit the most severely were the housing industry, where the problems began, followed by the automobile industry. Now we see both are declining again.

We reported about Ford’s plans on Monday to cut another 7000 jobs, representing 10% of its workforce worldwide. And the recession, which was likely due to happen regardless of market conditions, comes at the worst possible time. It could be exacerbated by the ongoing trade war, which foreign carmakers have warned could put 700,000 American jobs at risk. This chart shows all of the job reductions announced and reported over the last six months:

Morgan Stanley analyst Adam Jonas said Tuesday: “Auto companies globally are contemplating life where global production has greater downside risk than upside. The chopping may not be over for Ford,” he continued, estimating a 5% decline in revenue could result in 23,000 more layoffs in the future.

Not your typical doom-and-gloom artist

You don’t read about likely asteroid impacts in the coming year or the approach of Planet Nibiru, fascinating and stimulating as all those things are. What you read here is pretty well exactly what you’re going to get.

What you also don’t read here are enticements that play on your fears — advertisements about where to buy a bunker you can bury in your backyard (unless they pop up automatically from some of the ad services that pay me to post content I have no control over). You don’t see ads or articles begging you to buy gold (though it has its place in any portfolio).

You also don’t read hatred — articles about how you need to furnish an armory big enough to kill all the neighbors who are going to attack your garden out of starvation or about how everything is the fault of Jews. You don’t get any wild conspiracy theories.

And, finally, you don’t read about things here that don’t actually happen. Sometimes my scale may be a little off, but only because the Fed suddenly realizes the horrible event I’ve been saying will happen IS happening and so they leap in with the most massive intervention the world has ever seen; but that should only tell you how bad it was really about to be! Sometimes, I may also adjust my timing a little for other events because of these interventions that were previously unknown or because of global natural catastrophes that cannot be predicted.

After all, I’m making my predictions based on what I see as the trends that will dominate and influence, not based on a crystal ball and without the benefit of divine revelation. They are trajectories, not possible futures seen with my third eye.

Why don’t I write all that stuff listed above when some make good money off of it? Because I’m not here to titilate or make money by playing off people’s fears or trying to add to those fears with every sensational story I can find or create to generate traffic through clickbait, but most of all because I’m only interested on this site in what I am certain is going to happen. I want to write what you can count on.

I’m here to say what the mainstream media won’t say but only the part that I am reasonably certain is accurate and only what I am certain will play out. I avoid conspiracy theories, though some may be real, because I am only interested in what I can build from facts that I am certain of.

I’m sure I could make more money by going for sensationalism, but I’m much more interested in building credibility over time so that, when the next big downturn happens, as it is unfolding now, there are more people out there who will resist the next rinse-and-repeat economic cycle. If a lot of the stuff you say is just fear-mongering that doesn’t actually come about, why should anyone of note really listen to you?

Thus, here you read about Carmageddon, the Retail Apocalypse, the stock market’s next downturns, before they happen and well before the mainstream media says anything; and then you read about them as they are happening, as I quote the mainstream media, so that you can see the predictions were credible. Everyone else’s doom porn may be interesting, but I stay with the stuff that is actually going to hit you in the back of head so you know when to wear your hard hat or duck, but mostly to be clear and accurate about the forces and people that are destroying our economic hope in order to help people understand the chaotic times they are in.

The facts may be gloomy, but I’m not. I have the spiritual faith to face hard times and the temperament largely to laugh at them. (I hope you do, too.) I don’t feel the least bit anxious about any of it, but I LIKE TO SEE WHAT IS COMING AND TO CALL OUT INJUSTICE, VILE ECONOMIC BEHAVIOR, FRAUD AND CRONYISM. I like to call stupidity for what it is so that fewer people will be beguiled by it. That’s just my little effort to shine a light in the house in order to keep the roaches from having free play.