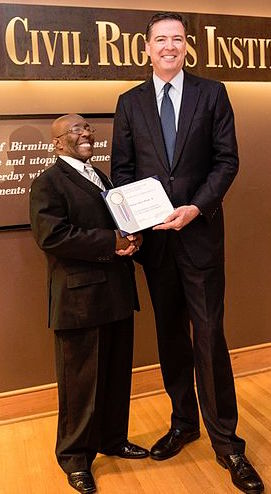 Senate hearings in Washington have laid bare the failures of the FBI investigation, showing there was never any evidence of ‘collusion’, and it was all a campaign to ‘get Trump’.

The US Senate Judiciary Committee questioned former FBI Director James Comey during a hearing this week over the recent Horowitz report.

That report on the FBI’s Trump-Russia probe laid out significant omissions in how the FBI handled its investigation.

Wednesday’s hearing focused particularly on court warrants obtained by the FBI under the Foreign Intelligence Surveillance Act (FISA) to spy on Trump campaign aide Carter Page, which Committee Chair Lindsey Graham characterized as “a stunning failure of the system.”

‘They were trying to take down the president’

Graham began the proceedings by noting that the goal of the Senate’s investigative hearing “is to understand how our system got off the rails. … What kind of system is it that the FBI director has no clue about the most important investigation maybe in the history of the FBI?”

“When does it become obvious,” Graham asked, “that the people in charge … had a deep-seated bias against Trump?” He took that question further by asserting the appearance of a deep-state soft coup against the president, noting that the omissions in the FBI’s process “weren’t random; they were politically oriented against the president they were trying to take down!”

And, for the record, Graham noted, “The FBI ignored exculpatory evidence, altered documents from the CIA, had interviews where the sub-source disavowed the accuracy of the document, and never submitted any of that information to the court!”

Comey appeared to dodge many of the questions, using a tactic made familiar to the American public during Watergate, responding with a standard “I don’t recall.” (During the Nixon Watergate hearings many witnesses prefaced their vague answers with “to the best of my recollection” to avoid the possibility of later being convicted of perjury. After all, who can prove the witnesses’ memory wasn’t clear? They didn’t say something didn’t happen, just that, to the best they could remember, it didn’t happen.)

Graham began to lose patience with Comey’s persistent vaguery and stated at one point, “Everybody’s responsible, but nobody is responsible. Somebody needs to be responsible for misleading the court…. What astounds me the most is that the director of the FBI, in charge of this investigation and involving a sitting president, is completely clueless about any of the information obtained by his agency.”

Pounding his fist, Graham noted that the information to the courts that Comey had characterized as merely “inadequate” was “criminally inadequate!” “How could the system ignore all that?” Graham asked, “How could the director of the FBI not know all of this?”

Pouring fuel on the fire

Recent declassification of FBI documents related to the Mueller report provided Senate Republicans with new fuel to light under Comey’s feet. Graham used the declassified documents to point out that Director of National Intelligence John Ratcliffe summarized the 2016 presidential campaign of Hillary Clinton as using “fabrications”, as Graham put it, to “link Trump to Russia and the mob.”

Comey could only respond, “I can’t answer that. I’ve read Mr. Ratcliffe’s letter, which I have trouble understanding.”

In testimony last week, FBI agent William Barnett, who headed Robert Mueller’s investigation into former national security advisor Michael Flynn, revealed that, from his perspective, there was never any evidence to justify an investigation into Flynn’s ties to Russia. Barnett claimed that Comey exhibited clear bias in pursuing such alleged ties between Trump and Russia, stating that his superiors in the FBI were simply motivated by a desire to “get Trump.” He believed there was nothing there to be found, and the Mueller investigation ultimately did come up with no evidence of collusion between President Trump and Russia.

At Wednesday’s hearing, Graham summarized the end result of the Mueller investigation, saying, “After two-and-a-half years, and $25 million, and 60 FBI agents, that job is done, and not one person has been charged with colluding with the Russians in the Trump world. Not one. … How are we supposed to trust this system without fundamentally changing it?”

Graham accused the Clinton campaign of “basically trying to create a distraction, accusing Trump of being a Russian agent … to distract from her email server problems.”

Graham pointed out to Comey that a primary document used to attain the FISA warrant “was absolutely full of misinformation and complete lies. Did you know there is no Russian consulate in Miami, and the dossier mentions there was one?”

Democrats at the hearing tried to shore up Comey’s defense and turn the case against Trump by claiming he had sided with Russian President Vladimir Putin regarding US intelligence agencies. They implied that Trump had defamed US intelligence by saying the various agencies’ work was “concerning.”

As if to establish this was all demonization of the FBI by the Trump administration, Democratic Senator Dick Durbin quoted US Attorney General William Barr, the ultimate head of the FBI, as stating the FBI’s Russia investigation was “abhorrent.” Durbin noted, “The attorney general went on to say, ‘The law-enforcement and intelligence apparatus of this country were involved in advancing a … false and utterly baseless Russian collusion narrative against the president.’”

(It was AG William Barr who assigned Horowitz the role of investigating and reporting on the Mueller investigation.)

To that Comey responded, “He says that a lot. I have no idea what on earth he’s talking about.”

Exhibiting some apparent mental fog, Comey said, “The notion that the attorney general believes that was an illegitimate endeavor to investigate – that mystifies me.”

Even CNN summarized Comey’s testimony on Wednesday as a “mea culpa.”

US Senator Ben Sasse eventually got Comey to own up. He prefaced his questioning by saying the many wrongs cataloged in the Horowitz Report were “not just saddening and infuriating,” but “also really embarrassing.”

Comey responded, “I think I share your reaction, Senator Sasse. The collection of omissions, failures to consider updates… It’s embarrassing. It’s sloppy. I run out of words. There’s no indication that people were doing bad things on purpose, but that doesn’t mean it’s not embarrassing.”

Sasse next asked Comey, “Doesn’t that point at you? … You were the leader!” to which Comey responded, “This reflects on me entirely, and it’s my responsibility…. I’m not looking to shirk responsibility.”

Sasse further pointed out, “Horowitz’s report talks about a FISA [warrant application] process that was riddled with errors. Every single place they looked, it was crap! … Where were you?”

At that point, Comey reverted to diffusing personal responsibility by saying the whole agency was too relaxed about how the process worked, acknowledging that, as a result, Inspector General Horowitz had “found problems in every FISA application.”

(This article was originally published on RT.com.)