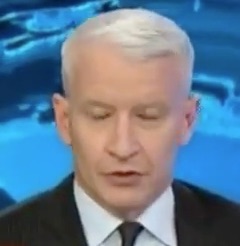 I’m a fair player, so even though I’ve said Trump is damaging his ability to improve the economy by making himself look guilty in the Russiagate story, I’ll also point out news that indicates he is not guilty of collaborating with Russians. Here’s an odd twist in the Russiagate story as Anderson Cooper sleepwalks past the truth of his own news break:

CNN, whose barrage of stories about Trump have run 93% negative according to a Harvard study, just confirmed that President Trump is telling the truth when he says he had no connections with Russia during the campaign. Watch the story — at least the first few minutes — then consider the following:

Trump’s position has been that he doesn’t believe his campaign had any connections with Russia and that he knows he did not. IF this latest leak to CNN from “multiple sources” is true, it does a lot more to confirm Trump’s position than Cooper’s. Why would Russia try to develop its connections with Flynn in hopes of “gaining influence” over Trump if Russia already owned Trump (as the allegations constantly say) because it had a direct connection with Trump as a collaborator? True collaborators do not need to try to court INDIRECT influence via THIRD PARTIES. (That’s not to say they wouldn’t seek more influence in the administration, but it would hardly be something they’d be excited about when they already had a far more direct path.)

Furthermore, IF Russia was trying to gain influence over Trump through Flynn, that approach means Russia certainly would not have let Trump become aware of that. (You cannot effectively use someone for influence when the person you want to influence knows what you are up to. Kind of creates suspicion over the person you are using to do the influencing.) Therefore, Trump would also be right in saying he doesn’t believe his campaign was influenced by Russia. With this news only now being leaked, it’s likely Trump didn’t know until recently about any attempts to influence him or his campaign.

The story also indicates that the Obama administration would not have let Trump know this. According to CNN, the Obama administrationg knew all about this, regarding it “as a five-alarm fire from early on,” and, therefore, limited how much of this information they shared with Flynn (and hence with Trump, lest the info get back to Flynn via Trump as Trump was clearly supportive of Flynn). The story says Russians regarded Flynn as their ally and says Russian officials were  “bragging” about the relationship they had managed to establish with Flynn. The ability to collaborate with Flynn wouldn’t have been much to brag about if they already owned Trump. Their bragging about managing to create an opportunity to influence Trump through Flynn indicates the Russians did not have much sway in Trump’s team to where Flynn was a big achievement.

After the intitial story about the new leaks, CNN’s commentary goes on to try to spin the story as showing it is “bizarre” that Trump continues to support Flynn. This, again, misses the point: If the Obama administration did all it could to keep this information from being shared, as the story claims, this information about Flynn may not have been included in the information that Sally Yates, part of the Obama Admin., shared with Trump. The administration, not wanting Flynn to know in those early days of the controversy that he was being investigated, would not have shared the information with someone close to Flynn. That would be even more likely if the Obama administration, having been surprised and badly upset by Trump’s victory, hoped to turn the Russiagate story against Trump to bring him down. They would naturally want to make it appear that Trump was complicit in all the information that was coming out and not make it look like Flynn was a sole operator.

If the Obama administration was decent in trying to “warn off” Trump from putting Flynn directly in charge of US intelligence, it would have shared this information with him. However, they might have leaked info to others and not Trump if they had an ulterior motive of trying to wrap Trump in a conterversy that would bring him down after they knew they had failed to keep him out of office. The question there becomes how secret did the Obama administration keep its knowledge about Flynn and for how long? A secondary question would be how complicit was the intelligence community in withholding the information from the current president?

How ironic that, in trying to bring down President Trump, CNN should be the first to provide clear evidence of his innocence in any collaboration with Russia during the campaign. (That doesn’t mean he’s innocent of trying to bring Comey down in order to stop the endless and so far completely evidence-free story that keeps raging against him. He may have taken a wrong recourse in trying to stop a fake and relentless scandal against himself.) And how perfect that CNN’s own bias against Trump kept them from seeing the conclusion that their own story strongly points toward: IF the Russians were excitedly boasting that they had secured Flynn as an asset for influencing Trump, Trump must not have been cooperating with them through direct collusion. (Who would be bragging that they had a back door to influencing someone who was already a completely willing partner in crime?)

I’m going to call Cooper’s story “FAKE NEWS” in the sense that its extreme bias proves (again) CNN is against Trump in their coverage of Russian collaboration. It is a fake conclusion from what may possibly be a true story in Trump’s favor.

Logic is logic. It’s math. Let’s take this out of the political sphere for a second in order to see how illogical Cooper and his guests are in where they run with this story:

For the Russians to brag that they could now influence Trump through Flynn if they already had Trump’s cooperation would be like bragging that you have gained some influence over your own child — a child who is already very cooperative — because you now have influence over one of his friends. The other parent listening to you would think, “That’s weird. She thinks it’s a big deal that she can now influence her own child because she has gained the cooperation of her kid’s friend?”

While it isn’t impossible that someone would brag that they can now influence their child through a friend, it’s certainly odd, and it would certainly lead to the listener concluding that the mother must not have much control over her own children. For CNN to take this story in the direction they did is like someone hearing a mother brag about the fact that she can influence her own child through a friend concluding, “Oh, this shows she has great control over her own children.”

Uh, no. Hearing that kind of bragging should naturally make any person think, “This parent must be seriously out of control of her family situation if she’s excited that she can influence her children through their friends like that’s some big gain.”

That CNN would actually think the story led to the bizarre conclusion that Trump collaborated with the Russians certainly demonstrates how biased they really are, given that the story so naturally leans the opposite way — to concluding that Russia didn’t have much direct ability to work with Trump and toward concluding that Trump had no idea Flynn was being used to influence him or his campaign because, if Flynn was there to “influence” Trump and not as a direct communication conduit to Trump, they would do all they could to keep Trump from being suspicious of their agent.