Coronavirus Unemployment Could Cause Greater Depression, Deadlier than the Disease 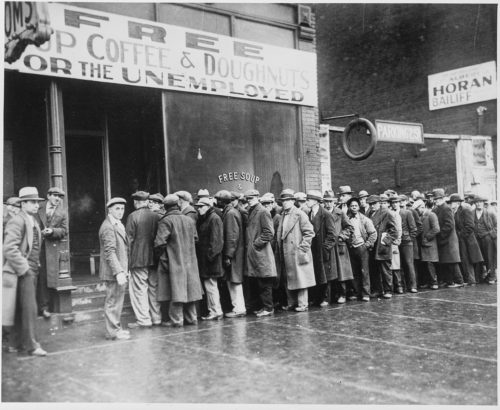 The longer US unemployment rises due to our response to coronavirus, the greater our depression, whether mental or economic, even to the point of another Great Depression.

Suicides increased during the Great Depression. Suicide mortality peaked with unemployment, in the most recessionary years.

The great despair of the Great Depression and increased suicide rates were due almost entirely to job losses, and we are approaching those record job losses now.

Fighting Great Depression Or Causing One?

The pain is real. The economy contracted nearly 5% in the first quarter due to the coronavirus lockdown, and it is estimated to reach several times that high in the second. As a result, US unemployment has just hit 30.3 million people.

The pain facing many Americans was on stark relief Thursday morning. Nearly 3.8 million people filed for unemployment benefits for the first time in the most recent week, the Labor Department said. That topped the consensus forecast among economists…. The new tally shows that over 30 million Americans have lost their job since the start of the coronavirus pandemic.

The total number of jobs created since the Great Recession has now been wiped out. As of this week, our coronavirus lockdown has raised unemployment to levels barely beat by the Great Depression.

We are beating other unemployment records. The US unemployment rate is a little slower to be reported than the total number of unemployment claims, but the previous week already set a record:

The number of people currently receiving unemployment insurance as a percentage of the labor force, was 12.4% for the week ending 18 April , the highest percentage recorded since the department started releasing those figures.

If you add up all new filings in the last 6 weeks, 18.6% of the labor force has applied for benefits.

Real unemployment worse than the numbers

Millions go unreported. Official statistics do not count the many who became unemployed due to the coronavirus shutdown who were not eligible for unemployment benefits.

But there’s a unique factor right now due to the sudden impact of the coronavirus shutdown. For several weeks, state unemployment agencies were not able to process unemployment claims fast enough, though those backlogs are starting to decline.

The figures are also still undercounting the number of people out of work. Some states are still dealing with backlogs of claims after their systems were overwhelmed by the massive volume of applications.

Records were not kept during the Great Depression by the same measures used now, and present records leave many out. That makes an exact comparison in employment statistics impossible.

The general level of unemployment throughout the Great Depression was only a little higher than today’s numbers.

That 14% rate is not much higher than the latest publicized insured unemployment rate of 12.4%. That will jump higher when the official rate gets adjusted again next week.

The Federal Reserve shows peak unemployment in the Great Depression hit in May 1933 at 25.59%

Is The Coronavirus Lockdown Worth the Destruction it is Causing?

Everyone’s first response is that you cannot compare the value of saving human lives via a pandemic lockdown to the economic costs of a lockdown. However, that ignores the ultimate cost in human lives and pain that will come due to unemployment … a lesson nearly lost in history. So long ago has been the last time we faced something like this as a universal experience, there are few left who remember it.

Many economists are starting to realize unemployment is going to last longer than just a few months. The longer the coronavirus lockdown continues, the greater the unemployment numbers, but also the slower the recovery on the other end as businesses die off waiting for that end to arrive.

The Great Depression brought a human cost of suicide, depression, loss of human dignity, hunger, and death from exhaustion that scarred the human psyche for a hundred years. It became a life-story of human suffering equal to the war stories of WWII.

Back then, labor discord erupted in response to the divide between the haves and have-nots. Communism or socialism gained unexpected widespread popularity as an alternative to the greed that was allowed to rule under unbridled capitalism. Despots like Hitler rose to save people from nationwide poverty. The Great Depression might equally be called the Great Desperation.

Today, labor discord is brewing and starting to erupt in small pockets due to forced employment and social lockdowns. Communism and/or Socialism is rising in unexpected wide popularity in the likes of Alexandria Ocasio-Cortez‎, Elizabeth Warren and Bernie Sanders. For now, one man’s leader is seen as another man’s despot. History will decide who the true despots are, not those who follow them; but half the population practically hates the other half.

Can we be sure the paths the nations have set themselves on do not converge at a Greater Recession than the one we just left or even another Great Depression like the one the world knew nearly a century ago? The times have a lot of common chemistry. Desperate times make desperate people, who may shred the thin fabric that weaves civilization together.

Given the pain and suffering we reached in the Great Depression due to unemployment and hunger, I think we need to ask, “Is the coronavirus lockdown worth the strains that it is creating?” Are we putting ourselves at risk of equally desperate times? Do we know the world can pull out of this and escape a greater depression when there has never been a time in history where all the economies of the world shut down in unison to stop a plague? Do we have any real idea how hard those massive, intertwined economic engines may be to restart?

Peggy Noonan wrote in her column recently that “this is a never-before-seen level of national economic calamity; history doesn’t get bigger than this….”

Coronavirus has changed everything. The longer it lasts, the less the future will look anything like the past.

Spend a little time to consider the cost in human lives and suffering of the Great Depression, and then say there is an easy answer as to which is worse — viral contagion or economic contagion:

(This article was originally published on CCN but has been expanded for this site.)