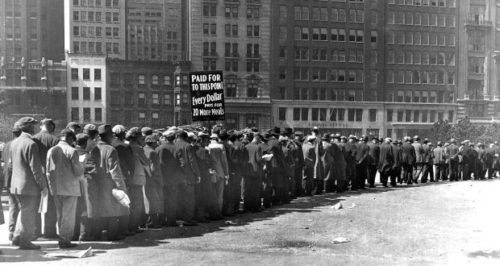 It’s time for my semi-regular roundup of where the economy has gone since the last roundup, and …

Retail sales have recovered, but not enough on the upside where they stalled out in October, to compensate for earlier losses to the downside:

The recovery in US industrial production stopped in September, falling far short of a full v-shaped recovery, and actually fell again:

That erases fourteen years of growth in US industrial production, taking us back before the Great Recession and all recovery growth since then:

October’s numbers, which came in a week ago, didn’t fair much better:

Not surprisingly, then, the total of all the kinds of jobless claims out there remains at an historically astronomical level, and the rate at which they are coming in has actually started to rise again:

With that kind of unemployment, welcome to the pandemic version of the Great Depression’s soup and breadlines:

Thousands of cars lined up to collect food in Dallas, Texas, over the weekend, stretching as far as the eye can see. pic.twitter.com/xLFGOcBkPK

Building permits have recovered to where they were before the pandemic:

While new home sales are running far ahead of their average:

That has been attributed to flight from cities that are high in anarchist crime and riots and high in COVID, but that doesn’t fully add up because sales and prices in many of the cities supposedly being fled have also gone up, and the national average in home sales and prices is up. The national average should be flat if sales are falling in big cities as fast as they are rising in less populous areas.

This sharp rise might more likely indicate a make-up in lost sales from March through May when no one wanted to be in the house of stranger and no one wanted strangers in their home, and it may be partially fueled by record-low mortgage rates due to all the stimulus money floating through the financial system plus new stimulus money that piled into personal pockets because, as you can see, the housing surge more than makes up for the period of decline earlier in 2020.

As a result, mortgage debt in America rapidly rose over the summer to a record of $10 trillion. The $85 billion that piled on just between July and September set a record high for that period, too. (Auto loans also soared to a new record.) But is using stimulus money and cheap interest to heap on so much debt going to prove a prudent plan down the road during such strapped times, especially if forbearance programs on many of those home loans sunset at the end of the year?

The rent side of forbearance doesn’t look any better with retail renters alone owing $52 billion in overdue rent. With the nation going back into lockdowns in many locations, causing even longer rent backups, how do the landlords paying mortgages on those properties keep their own heads above water?

Relative to a longer timeline, you can see new home sales are actually making up in a hurry for a lot of ground lost during the Great Recession:

GDP ain’t what it used to be

GDP surged by almost enough in the third quarter to make up for the combined declines in the first two quarters:

On a year-on-year basis, instead of an annualized quarterly projection, however, that still leaves us at the level shown below because the commonly used annualized figures assume the remaining quarter will do as well. (For an explanation on annualization, read here.):

JPMorgan, has said it anticipates the fourth quarter will go slightly negative again. In which case, the final year-on-year figure will be lower than the graph above, leaving the annualized number in the first GDP graphs something of a phantasm that never fully materialized if we go into a second dip of recession as JP thinks likely.

Those unsettling results came with trillions of dollars in stimulus, which is now deadlocked in congress, and …

As Bloomberg notes, while the report makes clear that the economy has found a solid footing for now, analysts caution that growth will be much more modest and choppy in months to come, especially as the spread of the virus gathers pace again and lawmakers remain in an extended deadlock over a new stimulus package. Moreover, there are still nearly 11 million fewer workers on payrolls than there were before the pandemic hit, and analysts say a full recovery in GDP is at least several quarters away.

With congress and the presidency, itself, deadlocked in battle, the possibility of stimulus failing when most programs hit their end-of-year deadline intensifies. Their renewal in the next two months may depend on whether the current president and the current senate want to leave a scorched-earth policy for the new team or help set the new team up for success at a national recovery.

(One doesn’t have to remember back far to recall John Boehner’s warning to freshman congressman at the start of Obama’s first term that they had better not vote in favor of anything Obama proposed, even if it should be something they would normally like and think was a good idea for the country, lest Obama get the credit and gain another term, which was the final stroke in my coming to hate party politics on both sides altogether, for it is often party over country.)

The double dip JPMorgan foresees will be due in part to the amount of permanent damage created by business closures. I’ve prognosticated about this and reported on the development over the past year. I think at my last report the number of businesses listed on Yelp that had closed permanently was around 70,000. Now that number has risen to almost 100,000 businesses on Yelp alone that will never again be contributing to economic growth.

Replacement of these businesses by new ones filling in is likely to be very slow progress because few people will want to launch a new business in such an uncertain and depressed environment where even population demographics are purportedly changing, leaving local small-business opportunities in long-term question.

These permanent closures (as well as many not tracked on Yelp) are not just sad for the business owners and their employees, but sad for communities, too, which have permanently lost some of their favorite places, diminishing the overall quality of the community for years to come. We probably all have a favorite restaurant (or several) that has been taken out by our nation’s response to the Coronacrisis. Now many of our other favorite spots, already barely hanging on, are being assailed by the third corona wave.

These are some of the very real knock-on effects I was saying last summer would become evident as the year wore on.

The multi-trillion-dollar stimulus effort to prevent many more dominoes from falling than those that already have is coming with great strain upon the US budget. In the first month of the new fiscal year (October), the deficit due to these efforts was over a quarter of a trillion dollars. That is double the already horrible deficit created for the first month a year ago by the Trump Tax Cuts and spending increases. Total federal spending (meaning that part funded by new debt (the deficit) plus the part funded by revenues) for just the first month of the new fiscal year was over half a trillion dollars!

This completely demolishes any October deficit in history (the last record having been set at the bottom of the Great Recession at a hundred billion less than this October). Likewise the full annual deficit for the year we just finished has smashed any previous year, closing at $3.1 trillion, more than double the worst year of the Great Recession.

Given all of the above, it is no surprise the US consumer confidence has slumped into the doldrums:

We sit on the rocky earth laid out above with a presidency under heated contest, claims of mass voter fraud running through the courts, and an undecided race for control of the senate while almost all of our bailout/recovery/stimulus programs are about to enter their twilight month, requiring full cooperation of those government parties if they are to be renewed. Without this programs, poorly as some of them have gone, I think we get a sense of how deep the hole looks ahead.