Home » Uncategorized » Trump Disinfectant Injection Theory Takes World — and Lysol — by Storm
« Can Gilead Science’s Coronavirus Cure, Remdesivir, Save the Economy?
How to Invest in Oil and How NOT to Invest in Oil » 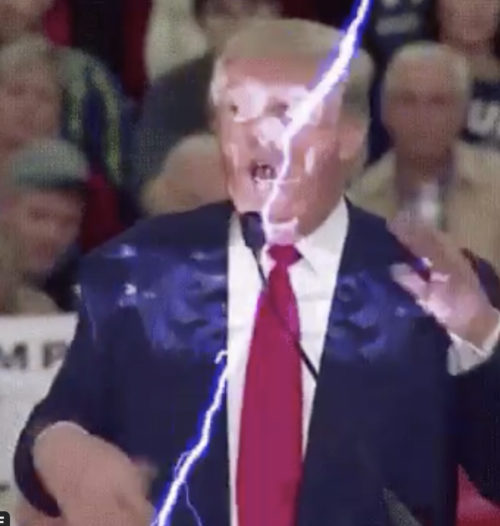 According to Donald Trump disinfectant injection with Lysol or a stiff drink of bleach may be the new miracle cures for coronavirus. Consulting publicly with his coronavirus team, President Trump recommended a good internal wash of Lysol to rinse COVID-19 away. That and some internal sunlight/UV light infusions to dry things out afterward.

The president’s focus was clearly on getting the economy going safely again. Whether or not infusions of sunshine kill coronavirus throughout the body or Lysol injections or swallows can heal the body of coronavirus, Donald Trump assured the public his administration is pushing the outside of the envelope in search of creative cures that will help the US leave lockdown safely and open the nation for business once again.

In a presentation that really needs no satire because it stands on it is own in the halls of humor, the president assured the nation that Dr Deborah Birx, the White House coronavirus response co-ordinator, is looking into UV light infusions and disinfectant injections upon the president’s enlightened recommendation.

The president later tried desperately to walk it all back as a joke when Trump disinfectant injection memes and UV light therapy themes torched him like a man who fell asleep for eight hours in his tanning bed.

You decide if the president of the United States sounds like he was just kidding around and if the important people counseling him him sound like they’re laughing:

“It gets in the lungs and does a tremendous number on the lungs.”

Because our president has a good “you know what” (no, I don’t), he’s figured out that, if we could just inject disinfectant Lysol or bleach into the human body, that would provide a simple common-sense cleanse of the entire body from the inside out, just like we do with plastic surfaces. Why not, at least, look into it.

Likewise, since environments with warmth and sunlight diminish the spread of the illness, why couldn’t we just irradiate the body with some kind of intense, powerful UV light, to cure the disease.

The White House went into a rapid spin cycle late Thursday and Friday trying to clean up the president’s comments. The stain on the president did not come out, however. Perhaps they should have added bleach.

I, personally, think the president was inspired to come up with the Trump UV therapy plan while using his tanning bed (and maybe sniffing bleach) to think we could all have the same healthy, virus-defying orange glow the president emits after a prolonged session.

Quick to recognize global danger, Lysol tried to disinfect itself of all liability:

“We must be clear that under no circumstance should our disinfectant products be administered into the human body” pic.twitter.com/TVEgfZHTax

Apparently, corporate did not recognize the president was just joking or, being a disinfectant company, they have no sense of humor when it comes to bugs.

Discerning Twitter birds responded with such questions and statements as

What about Tide pods?

It’s a reasonable question. If Lysol or bleach work, maybe we should try chewable Tide pods. I wonder if they come in minty-fresh?

Some supporters found a better out for the president than trying to shrug his words off as lethal humor:

Certainly not a leader’s fault if a consumer lacks total common sense & drinks a disinfectant.

Agreed. People are stupid, and that’s their fault. The stupid ones probably should (and maybe would) inject disinfectants or drink bleach and would, thereby, cleanse the human gene pool. However, what if it is the leader who appears to lack even the most basic common sense? Then do we have a problem, Houston?

Might it add risk to the lives of the stupid if he tries to add credibility to the Trump Disinfectant Injection Theory with the help of a “top scientist” panel on national television and the weight of the office of president to make it sound like his bleach-and-UV-body-cleanse routine has merit?

Trump clearly did his best to draw in the support of a physician who is the White House Coronavirus Response Coordinator and who is also the United States Global AIDS Coordinator, and she politely said she hadn’t heard of the concept. One can only imagine how Dr. Birx cringed inside when the president turned to her and asked if she had ever heard of using intense heat or UV light as an internal antibiotic to kill coronavirus, and she responded,

“Not as a treatment….. I mean, certainly, fever is a good thing. When you have a fever, it helps your body respond. But I’ve not seen heat or light….”

Before she could get any further with diminishing his ideas, Trump interjected,

I think it’s a great thing to look at.

At last, we now understand why so many cleaning products have to have disclaimers for idiots that say things like “You should not use Lysol as a beverage.” Or “Do not drink” on a can of Drano. “Do not touch shiny parts at the end of this electrical cord when plugging in.” We have presidents who think some of those things could potentially be good ideas, worthy of the exploratory time of the nation’s brightest scientists during a global plague.

I think she was sniffing Trump Brand Bleach. Still another defended the president by sanitizing what he said for him,

Or maybe the person who wrote that tweet was drinking outside the box when he thought it would work to blame fake news. If the president only meant injecting Lysol into buildings, it would be odd that the makers of Lysol so quickly objected to the misapplication of their product. Do they really not want their product used to cleanse the inside of buildings?

Not everyone was so ready to excuse the president on the basis that Trump Disinfectant Injection Theory was clearly meant to he applied only to building sanitation. Said one critic, quite simply,

Apparently, the president was not the only one inspired because back in March The Onion prophesied the president would come up with these very ideas:

The Onion article described a hoarder getting ready for the Trumpocalypse:

Throwing bottles of bleach, ammonia, and Drano into a cart at his local grocery store, area man Troy Mitchell was reportedly stocking up on one of every cleaning product he could find Wednesday in case President Donald Trump announces it is a coronavirus cure. “I got toilet bowl cleaner, carpet cleaner, Swiffer WetJet refills—you name it—just so me and my family will be ready if the president announces one of these things can treat Chinese virus…. Could just be 10 or 20 squirts of Windex into each nostril. You never know what might work in a pinch!…”

Now that The Onion proved prophetic, Twitter users were quick to quip with such responses as …

Perhaps tRump’s been leafing through back issues of the Onion for some insight.

We need the onion to create … articles about trump saying sensible stuff….and hope.

Imagine how hard it must be for them to make up stories more stupid than the ideas the shaved orangutan comes up with.

Did Trump say 1 spoonful of bleach or 2 for kids ?

Perhaps North Korea’s dead or vegetable leader, Kim Jung Un, got to where he is today by trying Lysol injections or a good bleach cleanse upon the president’s personal recommendation. In that case, maybe the president’s advice really is helping sanitize the world of viral plague. Let me raise a Glenlivet capsule to the president for that one.

I say that because I see a possible clever 4-Disinfectant chess scheme in President Trump’s coronavirus pressers. To which I note, first, the immediate news out of North Korea:

Could it be that Supreme Leader Kim Jung Un took Il with a severe case of COVID-19 and then was encouraged by our own Great Leader (his personal self-description many times over) to drink Clorox or Lysol as a home remedy? Good for American disinfectant sales, and resolved a possible nuclear showdown.

Doctors on the front lines are grappling with a new medical mystery. In addition to lung damage, many COVID-19 patients are also developing heart problems — and dying of cardiac arrest.

See the connection? Kim could have been in for a heart procedure due to COVID-19 and then heard about the president’s potential cure on his hospital TV. If he were to, then, demand a cup of Clorox, who would deny him? Who would want to?

Alas, who cannot, at a moment like this, recall the mad words of Marie Antoinette when she was told that the people of Paris had no sanitary water to drink:

“Then let them drink bleach.”

I also see 4-Disinfectant chess possibilities with respect to Iran, and I want to give the president the benefit of the doubt here that he may have just been pretending to be a stumblebum throughout that presser.

Consider the following headline, which you may remember, and I am certain the president would have been aware of prior to his presser:

And then look at the coincidence in timing: Only one day before the president’s seemingly off-balance coronavirus press conference, the commander-in-chief issued the following official order:

Might our 4-D-chess-playing leader have had reason to think Iranian military personnel would be watching his coronavirus conference and might try his alternative medicine? Perhaps President Trump wishes to be known as #DonnieDisinfectant (his new hashtag on Twitter) to keep his adversaries off balance. Never let them know what you’re really thinking.

Just saying, his whole charade could have been counter-intel aimed at the Iranians.

Disclaimer: We need to note that disinfectant injection and/or drinking disinfectants (except Glenlivet in moderation) should never be attempted at home and may be injurious to your health or cause mental delusions or excruciating death.