Home » Uncategorized » The Drip, Drip, Drip of Recession
« “The Recession is Now”
The Fed’s Final Bullet Hits ‘Em in the Foot » 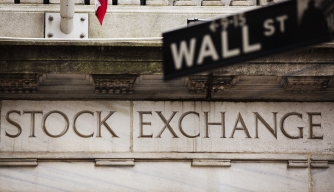 News of significant recessionary drops in the US became as relentless this past week as the ping, ping, pang of drips from a leaking ceiling hitting pans in the New York Stock Exchange. I’ve been saying you would hear the sounds of recession everywhere as soon as the second-quarter earnings reporting season began this summer. Here we are, and here’s a list of the week’s downbeat economic news that quickly terminated the S&P 500’s rally … right where I said it would end … slightly above its previous summit.

The Cass Freight Index remained negative for the seventh month in a row.

Shipping reflects the whole manufacturing economy, and it has been sinking into the South China Sea like this all year:

Bellwether Dow Transports continued to lead the Dow down.

Rail freight company CSX stocks plunged more than 11% late Tuesday and into Wednesday when its corporate report came out with earnings below expectations and with forward guidance for continued decline. CSX CEO, James Foote, said,

The present economic backdrop is one of the most puzzling I have experienced in my career…. Industrial customers’ volumes (are) continuing to show weakness with no concrete signs of these trends changing…. We are not necessarily being pessimistic about the second half of the year. But in as much as we need to adjust guidance, we’re just setting out the obvious.”

US manufacturing moved back to hovering right on the line of contraction:

In fact, according to Chinese government television, the Federal Reserve has stated the US entered “a manufacturing recession” in the second quarter:

I haven’t seen it reported quite that starkly here, but then economic reporting about the US economy here usually seems as rosy as Chinese reporting on China in China.

… continuing to prove stocks have nothing to do with how business is doing but simply turn businesses into gambling chips in a casino. Regardless, stocks are going to find it harder and harder and harder to rise against the drip, drip, drip of a declining economy; so, it is no surprise they did exactly as I said they would once earnings season started and began to fall away from their recent new highs.

Falling government bond yields are also typically associated with recessions. Having risen the week before, yields fell back over the edge this week:

Bank floors get slippery when wet

The drippage of recession started to form puddles in bank basements this week as corporate reports came in.

JPMorgan cut its forward guidance for net interest income because of the impending Fed rate cuts. Wells did worse in its major areas of business. The first major banks began reporting this week, including Citigroup. The areas most to miss expectations in Q2 were income from trading and investment banking, but it is interest income that was projected in forward guidance to decline in the 3rd quarter under Fed easing.

These banks didn’t take a big hit in EPS or total revenue, slightly beating drastically lowered expectations on their rising top-line numbers. Revenue gains, especially at Wells Fargo, mostly came from (surprise!) increased fees. Still, the drop in investment banking and many lower revenue lines kept their stock values from rising more than a brief bump. JPM’s commercial bank revenue dropped 5%. In all, not terrible reports, just milquetoast, except for …

U.S. stocks pulled further back from their records on Friday to cap the weakest week for the S&P 500 since May…. Momentum for stocks has slowed since early June…. “The biggest overall trend is if you beat, you may be mildly rewarded and if you miss, you are going to get pounded,” said J.J. Kinahan, chief market strategist for TD Ameritrade.

Goldman Sachs. Who would have figured the bank that made bank by helping us all crash into the Great Recession would be doing so again? Who would figure that the bank that runs all the financial offices at the White House would do better than others? Call me cynical, but I feel like I see a pattern here. Goldman did much better than expectations, initially lifting the Dow 22 points to a new intraday record on the second day of reporting season as other major indices fell.

In all, so long as you’re good with morbidly obese banks getting their vast bulk to barely clear much lower bars of expectation, what’s not to love about these rotund high-jumpers? It’s like cheering “Fat Olympics” — more funny than fun:

While all four banks were able to surpass much lowered expectations for second-quarter performance, “the broad theme we’re seeing is slowing loan growth, somewhat muted trading revenues and shrinking margins,” said Stephen Biggar, director of financial institution research at Argus Research in an interview. “Lower manufacturing activity, lower housing activity and business-investment slowing are all manifesting themselves” in bank performance, he said.

Sounds like the perfect bankers’ world to me. No wonder stocks were barely phased by those early reports. What’s not to like in that mix?

Deutsche Bank experienced a run of sorts this past week, according to Bloomberg, as counterparties in DB’s failing investment banking business — especially hedge funds — started pulling out a billion dollars a day.

The Retail Apocalypse caught a breath … but got smoked

Overall retail sales went up … but not in malls (brick and mortar) where I’ve been saying since two years ago years of trouble would keep building. The number of stores scheduled to shutter their shops this year is 12,000, busting the doors off 2017’s record of 8,129. While there was a lot of talk early in the week about the statistical spurt in overall retail sales, they were actually only up 1.8% YoY, which was less than inflation, meaning they were actually down since price inflation alone should have lifted them 2.1%, given that the measure of retail sales (dollars) is 100% affected by inflation.

All stock indices lost their lift

Stocks gained from an armistice of sorts in the trade war over the previous couple of weeks but even more from the Fed bending over backward after its last FOMC meeting to assure markets of future free (or almost free) money. This is as I said would happen: investors would most likely get the interest-rate cut they were demanding, so stocks would rise at first upon the euphoria of investors getting the drug they want. Then, however, they would face increased gravity as soon as the earnings season hit. That would make it hard for stocks to get any uphill traction beyond the temporary shove from the Fed. So far, right on track!

Here’s why stocks were rallying hard this year:

Yeah, that makes sense: net income for S&P 500 companies falling hard into an income recession since the beginning of the year and estimated to be worse in the second quarter than the first. That should support a rise in stocks, right? Why not in an economic world that is entirely make-believe?

We’ve forgotten completely what investing in businesses was originally all about! This is Wonderland where everything is upside down. One invests in businesses in hopes that they will decline badly enough that the Fed will have to bail the economy out, and polite society all accepts that this is perfectly normal as they enjoin the Mad Hatter’s tea party. You see, it rains upward in Wonderland.

Corporate profits have declined back to where they were in 2014, but stocks are 60% higher than they were in 2014! And, yet, you cannot convince stock-market bulls that things might be getting a tad overpriced. No euphoria there, right? They even think I’m foolish to think a market like that is rickety and in risk of falling (like I was foolish to feel the same way last summer). I, on the other hand, think they’ve been working a little too long with the hat mercury that makes a hatter madder.

This week stocks cooled off.

After a declining first quarter in reported earnings, the consensus for second-quarter earnings now that they have been coming in is that the mid-and-large size stocks of the Russell 1000 will average a 2.6% decline in earnings per share. And that’s with stock buybackacks running strong. It should be even worse in small stocks. FactSet estimates a 3% decline for EPS in the S&P 500, and says this will be the second quarter of YoY declines. If they prove right, that means we’re in an earnings recession.

So, stock index gains have been coming in, regardless of declining revenues, declining earnings, falling transportation stocks and manufacturing stocks, only because of delusional hope about global trade settlements changing the economic lay of the land and the promise of practically free Fed funds. But the drip, drip, drip seemed to be catching up with them this week.

With practically free Fed funds being just about the only hot air that is keeping the market aloft this month, the Fed dare not not come through with a rate cut at the end of the month, or the market will blow away like a house of cards in a windstorm.

That said, planetary retardation reached new lows. Financial reporting like the following by CNBC now raises no concerns about stupidity or what’s in the water:

Investors will welcome the strong start to the earnings season, but the outlook for corporate profits remains bleak. Analysts expect S&P 500 earnings to have fallen by 3% in the second quarter, according to FactSet data.

We now live in a day when a 3% decline is considered a strong start! No one sees a problem with the thinking there? Let’s hope whatever is in the water decreases human fertility as much as it does intelligence.

Big surprise! And, so the airhead market that had bumped up a little on mediocre banking news tumbled on Trump trade news. Once again, Lucy snatched the football away from Charlie-Brown investors, and the market fell on its butt in a little trade tirade.

The United Stat’s main negotiators agreed with the president’s take, though their statements have often been at odds with his:

U.S. Trade Representative Robert Lighthizer and Treasury Secretary Steven Mnuchin spoke with their Chinese counterparts on Thursday but there was little sign of progress in the talks.

Yet another consecutive month of draining news for housing

US housing starts and permits both dropped further with permits hitting their lowest level in two years (significant given that the start of summer is when the most permits should be applied for). And this in spite of much lower mortgage rates.

I pointed this out in a comment to my last article, but I’ll add it here so it is not missed:

The last time I reported on this particularly reliable recession indicator, it was just below 30. With another month now having passed, it is above the 30 level. As you can see, only one time in the last half century has this reliable indicator passed the 30 level when the US was not already in recession. Since the Fed says this is its most reliable indicator, you can see why Powell has promised rate cuts. By their best measure, we are probably already in recession.

The Leading Economic Index declines its most in almost four years

Following a completely dead April and May, the index took a dive. We haven’t seen a drop like this since the end of 2015 when the Fed first began raising interest rates.

Those are a lot of leaks in the ceiling for just one week. It’s going to take a lot of pans on the New York Stock Exchange floor to keep up with them. It looks like it was such a great recession, we’re headed back for more.