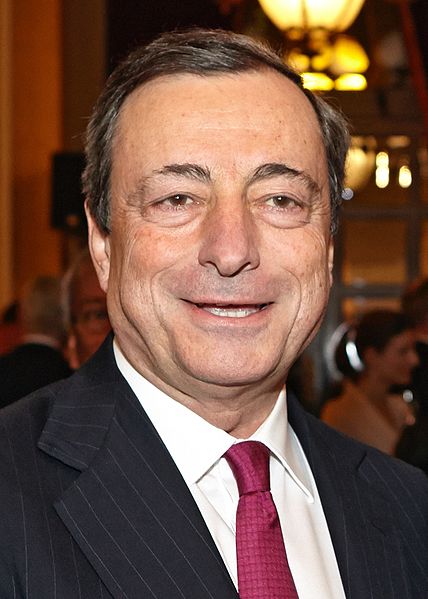 Europeans must have been delighted to discover that one thing is working as well as it has since the start of the Great Recession. Behemoth banks that are failing are still able to pay their Christmas bonuses to their top executives and give nice dividends to their shareholders thanks to Super Mario Draghi.

Keeping up the tradition of central bankers looking out for other bankers, Mario Draghi, chief of the European Central Bank “agreed to lower the minimum capital requirements for Deutsche Bank on Tuesday, ‘giving the lender more leeway to structure bonus payments and dividends.'” (Zero Hedge).

Thank God for that, huh? The needs of the stockholders and top execs have been taken care of before one of the world’s oldest megabanks falls on everyone else. While Deutsche Bank’s stocks sit at all-time lows after it has been required to pay $8 billion in fines, at least the golden parachutes have been neatly folded.

Meanwhile, the world’s oldest bank in Italy got nationalized for Christmas so that the losses of capitalists — many of whom exist outside of Italy — could all be socialized to the people of Italy. However, when the People’s Republic of Italy became the new owner of the bank, they found out the hole in the bank’s core was bigger than they thought. (Surprise.)

The ECB now estimates the hole to be 8.8 billion euros, rather than the 5 billion of additional capital they formerly believed it needed. That’s a 75% increase in the bank’s capital shortfall that took place from November through December. What a sleigh ride!

Turns out that all the talk of nationalizing the bank caused depositors to rapidly withdraw funds (who woulda thought?), creating something of a black hole in the bank’s core. Lingering depositors don’t need to worry, though, because the Italian parliament has assured them that all Italians are equally on the hook for the bank’s losses by guaranteeing a 20-billion euro fund to stabilize any Italian banks that are too big to fail.

In Monte’s case, the Italian government will invest 6.3 billion euros of this fund into filling the growing hole, and the rest will be squeezed out of bond-holders. (Of course, that news is bound to send even the lingerers running if they know what’s good for them, but obviously they don’t, or they wouldn’t still have been there when all this went down, as warnings have been evident for a couple of years.)

Gee, whatever happened to bail-ins putting the bank’s salvation primarily in the hands of share-holders, bond-holders and major depositors? Look’s like the government still believes general taxpayers should front the biggest wad. So, you’ll be glad to know that, even in Italy, the principles of saving too-big-to-fail banks at the start of the Great Recession are still largely in play. The costs of failing capitalists shall be largely socialized upon the poorer parts of the population because their citizens have happily allowed banks to remain too big to fail.

Maybe the depositors were all withdrawing their money to buy Christmas presents, so Italy will be saved by a Santa Clause rally. (It is no more wishful than thinking these banks will not ultimately pull down their governments. This was, after all, the bank’s third bailout. Keep bailing.)

Italy is the eighth-largest economy in the world, third-largest in Europe, and its GDP per capita hasn’t grown since the Great Recession. It has issued the third-largest amount of sovereign bonds in the world to survive its relentlessly unfolding debt catastrophe, with many of its debts being held by banks and central banks outside of Italy.

On top of that, eighteen percent of all bank loans in Italy are bad debt that has been carried on the books since the Great Recession. Italian banks don’t write off this long-term bad debt because they have less than 50% of the capital they need in order to cover it. So, they pretend their customers will all win the Italian Liralicious Lotto and pay up. Since GDP per capita is actually sinking, the ability of each customer to ever pay one of these debts off is ever diminishing. The Super Mario jackpot better pay off real soon.

No wonder Italians took a big step toward their own euro exit on December 4th. Back when they had their own currency, they could, at least, try to inflate their way out of trouble. They could lower the lira’s value in order to draw trade away from Germany and toward Italian products. Now they socialize debts away from German (and other non-Italian) bond owners and bank holders toward the Italian populace.

Meanwhile in Greece, people have started rejecting their own inheritances in order to save themselves. At this point in the Greek crisis, so much real estate is underwater that it is worth less than it is worth. You don’t even want to inherit it for free because you cannot sell it for enough to pay off its debt if you accept it.

With incomes falling (unemployment is at 23%) and taxes rising (particularly property tax) to meet Germany’s Eurozone austerity requirements, old people have heaped mortgages onto their properties to make it through their declining years. To receive an inheritance from your parents is to receive their bundled debts.

Thirty-two percent of all property loans in Greece are now delinquent. So much for the ultimate safe haven. So many properties in foreclosure sales drives down the price, making the next round worse. So, beware of dead Greeks bearing gifts if they are willing them to you. Gift recipients are lining up in government cues to decline their inheritance. Wealth destruction via real estate.

But Europe has this solved. If everything goes well with Greece, the Greek’s condition is expected to resolve back to a normal economy in just fifty years! The Greek debt burden is about 177% of its entire Gross Domestic Product; compare that to the US now at a paltry 100%. Europe calculates the Greek’s situation will improve by 20% come the year 2060. Do you think maybe these people are debt slaves for life? I think they were better off under Rome in AD Zero than under Germany.

Germany is helping out, after requiring some rather Spartan austerity, by proposing that all of Europe send its refugees goose-stepping toward Greece in order to save the northern states of Europe from those social and financial burdens. That ought to stomp out the tiny nation, which can’t even look out for its own welfare. Greece already has bottled up huge amounts of resentment against both Europe and its own government. Germany seems blindly determined to use its immigration policies to destroy its own European union. “Here, feed our poor and wandering masses while you Greeks lick the bottoms of our boots for nourishment.”

Not sure who’s doing the math over there, but it doesn’t add up to success.

And now for a Bilderberg Bonanza:

(In case you are stunningly new to the world of conspiracy theories, the uber-elite one-percenters meet at the Hotel Bilderberg once a year to control the world through sub committees like the Illuminati … or something like that. Anyway, they’re really rich, and they suck.)

…Dear Bilderberg mEmBers, From NoW(), each OnE of you have 1 year (365 days) to truly work in faVor of HumaNs and not youR private interests…. MiNd the cuRrent situation: We conTrol your expensive connected cars, we control your connecteD house security devices, we control your daughter laptop, we control your wife’s mobile, we tape YoUR seCret meetings, we reAD your emaiLs, we control your faVoriTe eScort girl smartWatch, we ARe inside your beLoved banks and we Are reading YoUr assets  You wont be safe anywhere near electricity anyMore  We WiLL watch yOu, from NoW on you got to WoRk for Us, Humanity, the People

They had other choice words, too; but I don’t know if I recommend going to their site to check it out because who knows what it does to your computer while you’re there, but the link is provided for the brave of heart. I did and lived to tell about it. Maybe I’ll find out otherwise when a certain date clicks by.

It’s getting harder for the globalists to feel safe in their dark-paneled, smoke filled hotel meeting rooms, high in the citadels of Germany, Switzerland, or down inhabiting the swampy Netherlands and other such heady retreats … and this is why they want to control the internet.

The Christmas present from Fundamentalist Islam

Subsequent to the Christmas bombing in Berlin, Europe is proposing tighter restrictions on the movement of cash and precious metals. (This is one more reason that gold is not necessarily a safe haven in any nation because stringent controls were placed on gold in the US during the Great Depression, too. It happens; so, diversify.)

The European Commission says that tighter controls will help shut down funding for militant operations on the continent. I’m not sure how that will stop a guy from driving a truck into a crowd in Berlin, but maybe it will keep him from getting money for fuel. I think it is more likely that any excuse will do when bankers see people fleeing their proprietary product (money) for generic gold and need to find reasons to slow down the gold traffic. Probably more concerned about that than they are thinking this plan will slow down truck traffic in crowded streets.

Of course, that’s also why central banks own so much of the yellow stuff they hate — so they can throw it off as ballast whenever there is a run on banks in order to try to kill the price of gold and scare people away from it. Why else would they keep so much of something they say is a poor investment, other than to control the only competition in town to their monopoly?

The EU is also proposing stricter controls on the movement of Bitcoin funds. The new rules will allow seizure of funds, including gold, wherever “there are suspicions of criminal activity.” It’s unclear whether suspicion also requires a warrant, or just (that’s a lot of money, and I think you look funny or you had a drink with a bad guy).

While the European Commission solves its immigrant-created catastrophes with golden rules, widespread unrest is becoming the norm due to the over-exuberant globalists’ drive to soak up unscreened Muslim refuges that are not integrating well into European society. They are almost entirely unemployed and sucking up social welfare that those unemployed Greeks and Italians could sure use. That has got to be a short-fused bomb.

While the news is bad all over Europe, it’s not going so well for the globalists in the new year either! In light of extenuating circumstances, who could ask for anything more? The serfs are up, and the sooner they set sail from the Eurozone and its globalist control, the sooner they can have a real economy back. So, raise a cup of cheer; the New Year is here!