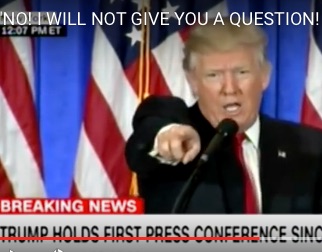 Without a doubt there is a ton of fake news on alternative media sites, which often publish what works for them without much fact checking. So, to launch a war on their competition, the mainstream media employed their standard sound-byte strategy that has worked well for them in the past. They simultaneously started circulating the new talking point “fake news” to try to stop the migration of audiences toward alternative news sites. It was time to point out how they, the mainstream media, do a superior job of editing out the baloney for you.

Fake news spews all over itself

Everybody else’s news became fake news, but the mainstream media’s own exaggerated and highly spun stories, which they ran day after day … that was just bedrock reality. Following Fox’s years of example, the MSM dropped even the pretense of separating their own commentary from news stories, and much of their news became commentary about alternative media; but the “fake news” mantra all backfired this time.

It only became all the more evident that the MSM was doing many of the fake stories, even as they commented against the fake news of the alternative media. Much of the news during the campaign had been the MSM’s own fake news like the endlessly repeated false fact that Trump has said Mexicans are rapists and all need to be sent packing. What he really said was that a certain few Mexicans who actually were rapists should have been sent back to Mexico because they were illegal aliens anyway, so why were we keeping them here? Common-sense stuff that most Americans (and probably most legitimate Mexican immigrants) agree with. Why are we keeping rapists here? Do we need them? Is it our responsibility to store them and feed them for Mexico? Thanks to the MSM’s sloppy handling of such nuances, however, much of the Hispanic community in the US believed as fact that Donald Trump thinks Mexicans are rapists.

Then, of course, there were all the stories about Trump’s lead advisor Stephen Bannon being anti-Semitic and working at an anti-Semitic alternative news site called Breitbart. (Wow! The MSM could kill two things they didn’t like with this one — Trump’s advisor and Breitbart.) Never did the stories mention that Breitbart was founded by Jews and is still owned by Jews, who hired Bannon because they like him, and that many of the editors and writers Bannon had working for him were Jews who think highly of him. All that mattered was that one writer (who was also a Jew) had published an article there calling another Jew a renegade Jew because he was, for a fact, a Jew and was renegade in that he was doing something that isn’t normally considered very Jewish. Well, that and the fact that Bannon’s ex said something nasty about Bannon’s opinion of Jews. (In divorce court, where we know ex’s never exaggerate or make false statements.) The MSM shared this fake news back and forth so much that it became another famous false fact that Breitbart is anti-Semitic.

Nevertheless, a lot of people were on to what was happening. So, when the MSM launched the term “fake news” millions of people readily grabbed the useful moniker and hung it like a lead collar around the necks of the MSM. They didn’t see that coming! Now, the members of the establishment media are beside themselves because they can’t claw the collar off.

Besides losing their audiences, the fake-stream media also finds they now face an incoming president who doesn’t even pretend to put up with their prattle and who is willing to simply ignore them as being too insipid to be worthy of his time. Instead, he refuses to take their questions and turns to their competitors — the alternative media:

The whole establishment press looks to be cracking up over the fact that the president-elect thinks he can ignore them. How insulting. How peevish. One of Whoopi Goldberg’s Five Talking Girls gave her view that she was actually “terrified!” (Chills. But, oh, how fun it is to watch: The ladies of The View go wild over Trump’s accusation of CNN’s fake news.) The funny part is that their own knee-jerk self-justification means they are almost certain to lose a lot more audience, rather than lear anything from their missteps because Trump is certain to reject them again and again in press conferences, which they are powerless to prevent.

The most recent and outrageous example of fake news came last week when CNN thought they could capitalize on a salacious and completely uncorroborated story about Trump hiring prostitutes to do naughty things to a mattress the Obamas slept on. CNN originally passed on publishing the baloney themselves because it didn’t meet anyone’s journalistic standards (and, therefore, might easily turn out to be fake news). That, however, didn’t stop CNN from seizing the opportunity to tell the whole world about the dossier, which they knew to be likely false, as soon as an alternative news site (albeit a liberal one) published the scurrilous story. With CNN’s heightened publicity, the story exploded like a small fire given oxygen.

CNN thought they could wash their hand of all guilt because they righteously reported only the truth  — that someone else had reported some likely fake news. It took me only two clicks, however, to get exactly from their story to Buzzfeed’s PDF of the document, and I wouldn’t have known to go there with CNN directing the way. Alas, their self-righteous attempt at arm’s-length, plausible deniability didn’t work for them, as their competitors have been ripping them to shreds over it. They have wound up looking as dirty as the journalists who did published the story, even though they don’t see themselves that way.

As an example of where their mainstream competitors went with the story, MSNBC took the high ground, viciously digging into the fake-stream media. I have to say it is fun to watch them go at it. It’s like watching a dinosaur fight:

It’s fun, too, to watch Anderson Cooper stumble all over himself and then get schooled by Kelly-Ann Conway as he tries to claim that CNN held the moral high ground by only reporting that others had reported the fake news: (Again, almost hilarious)

“We did not publish the … unsubstantiated allegation,” said Cooper over and over. True. CNN only put up the bright neon arrows pointing to where this baloney mud-raking could be found. CNN was just a publicist for fake news. (I KNOW because CNN was where I first found the story. I had never heard of the dossier until CNN pointed me to it, and it took me exactly two clicks to get directly from CNN’s site to a PDF of the dossier.)

CNN’s argument is essentially saying, “We didn’t put the poison in the caviar; we just told everyone where the buffet was that we knew was going to serve it … and that anyone trying it would find it to be yummy.” CNN rushed to this story so quickly that it appears they had their story about the story out before the actual story was published!

How’s that cop-out working for you CNN? Are people still stupid enough to buy into that kind of dodge? Apparently not. Don’t take my word for it; listen to their competitors rip them to shreds. MSNBC says CNN is just as complicit for giving publicity to Buzzfeed as Buzzfeed is for publishing the dossier:

CBS also says Trump is right to criticize CNN for its role in this story. Watch as CBS states outright that CNN has become one of the “greatest purveyors of fake news”:

Poor, hated CNN. Fake news was so much more fun when people simply trusted them with it. While CNN viscerally denies any culpability for disseminating information about the dossier, CBS points out that CNN’s summary statement was that the intelligence community considered the source of the document “credible.” In fact, it did not, and later came out with a statement that the information was never actually presented to Trump (just as Kelly Ann Conway claimed) but was attached as information that might be presented to him if necessary solely for the purpose of showing him the difference between their vetted material and unvetted disinformation. In other words, the intelligence community brought the material along to the briefing solely to use it as an example of “fake” intelligence if they needed an example — information they did not consider significant. According to MSNBC, the intelligence chiefs decided during the briefing there was no need for the example, so they never mentioned the info to Trump or gave the documents to him, which would make CNN’s claims that they did present the information … false:

Even Buzzfeed says that CNN is as guilty as they are on the “golden showers” story — the likely-to-be-proven fake dossier. In fact, Buzzfeed’s editor says CNN is worse than Buzzfeed for trying to wash their hands of it while still writing headlines and summary statements that make preposterous claims about the document:

So, the sharks are eating each other now. Buzzfeed claims it is taking the higher ground by, at least, owning its publication of the material while CNN is being self-righteous in claiming no responsibility for lending support to the dossier when their own headline states that the document showed Trump to be in a “compromised” relationship with Russia, and their summary said the intelligence community viewed the source of the document as “credible.” (Which the intelligence community certainly does not in this particular case.) So, even Buzzfeed does not buy in the slightest CNN’s attempt to wash their hands of the dirty story.

Now, here is an alt-news video that exposes some of CNN’s past fakery:

Did CNN audio actually cut out right when those talking went off the approved narrative? Well, in one case in this video, a CNN broadcaster plainly states that CNN cut the audio as soon as it was clear a Black man wasn’t saying what CNN thinks Black people should be saying.

I do feel badly for CNN in one sense: they are only just now getting recognized for how good their fakery has been. You can be sure that President Trump will make certain they get a lot more credit for that in the near future. The war against fake media is just beginning!