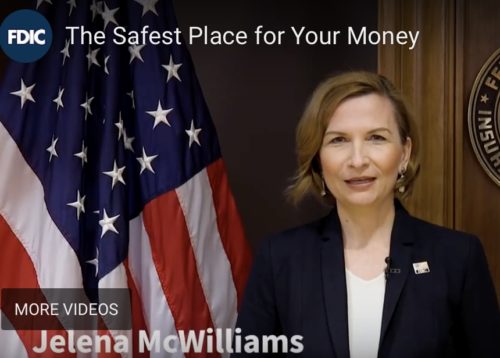 But the good news is that we are now back to those days just before 1933. So, dust off the mattress, and take out your knife, because it’s time to slice open the mattress and create a depository.

I call that their “slash and stash your cash” video because it alerts you to do the opposite of what it claims to be telling you. Can’t blame them for trying to save the system, though, especially when you look at this report just out today:

I thought I was being bold when I said this week’s rise in unemployment might go as high was 2.5 million newly unemployed, but it hit 3.3 million. As you can tell, that is — in just one week — a moon-trip higher than the more earthly unemployment gains of all the combined weeks in any recession in the last fifty years. (The highest week ever recorded was 695,000 applications — a number that was a failed launch compared to last week’s blast off.) Oddly, unemployment in health care was up, too.

And that was after the federal government instructed all state unemployment offices to delay reporting their unemployment numbers because it s all just flu skew anyway, while the Secretary of the Treasury assured investors they can ignore these numbers because the aid package that the senate just approved will soon right the economy anyway.

The above graph, of course, has not been properly seasonally adjusted, and it is in spite of the fact that a great many people in many states were not able to file this week for unemployment because their state’s computers and phone lines got overloaded from all the traffic. They should have driven there; the roads are completely traffic free. So, next week will be interesting, too.

As Powell said on The Today Show this morning – “it would appear we are already in recession” -$2 trillion bailout or not!?

Ya think? Not bad for a week’s work … or lack thereof.

Meanwhile, forget about buying gold, by the way. It’s sold out. So, time to slice mattresses. (Actually, I’ll keep my cash in the bank because I’m sure the government will bail them out. Last time we had runs on banks, the banks that went most broke made bank. So, you want to pick one that’s going broke.

Let me explain via a series of articles I wrote for newspapers ten years ago,

“What is it that makes a failed bank so valuable that it’s worth paying someone a hefty bonus to get it there?”

With the right question crystalized in front of me, I realized that I was onto something really BIG. It occurred to me that there are some hidden things you can do with a failed major bank that you cannot do with anything else (except maybe a failing major brokerage firm), which make it particularly desirable for a board of directors to hire the man with enough heft to capsize their bank quickly. The core value is this: You can use a failed bank to apply for a $20,000,000,000 interest-free government loan. If you don’t have a failed major bank, you’re not even qualified to be an applicant to this kind of government program. Thus, the faster you can roll your bank over like a porpoise, the faster you can scoop twenty-Bil. off the government pavement.

That, right there, is an eye-opener that would tell any board of directors, we need to to put this institution on the rocks and get it there NOW before these government loans run out because they’re going fast. (A trillion dollar fund doesn’t last long these days.) I mean, where else can a bank get twenty-billion dollars on a weekend without even filling out a formal application? To pull off a maneuver of that size that quickly takes a CEO who can boldly turn an ocean liner on a dime (or a cork or whatever it is that an ocean liner turns on) and steer it straight into the cliffs of disaster before anyone sees what’s happening.

“DOWNTIME Part 7 – Things to Do With a Failed Bank“

You don’t want a perfectly good failed bank to go to waste. So, find yourself one that’s about to fail and get all your money into it while you still can. It’s the safest place to be because those are the ones the government will make richer and bigger. The government’s plan for institutions that are “too big to fail” is always to make them bigger. And, you don’t want to wait too long, or they might soon all be taken just like gold. So, get on the move while ones that are still failing or about to fail can be found.

The above quote was part of a comedic series I wrote about the Keystone Cops of Commerce, which I’m starting to reassemble today for quick release as a cheap play book on Amazon in eBook form for how all of this is going to go now that we’re on the rinse-and-repeat cycle. The old title of the series “Downtime” is perfect for times like these. It’s time to make good on that promise of thanking Patrons at the $10-or-up level with the first free copy of any eBook I come out with.

All readers will have to do is scale up everything I said back then by an order of magnitude to know where we’re going now! And it’s entertaining reading.

Now, time to go make my coffee while there is still some of that.