The Grexit is Back 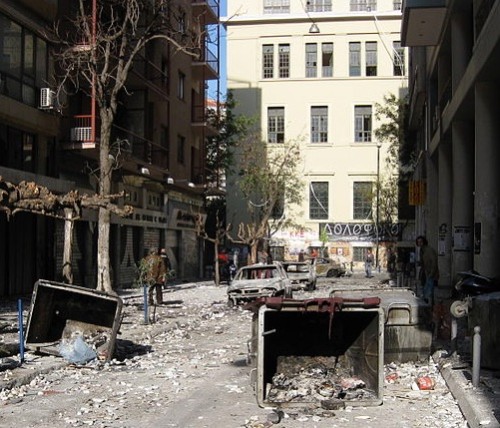 This year, I predicted that Greece would default on its debt, that it would strike a deal with its european counterparts in the Eurozone, that the deal would lead to public riots later in the year, which would lead to Greece again facing a Grexit in the fall, and that Greece would ultimately leave the euro this year. And here we are with all but exit from the euro having happened.

It began in June when I wrote the following:

Greece is going to default this year. Remember, I’ve been saying in past years, “Not this year” and left Greece out of 2014’s list of problems altogether; but Greece has now spent its bottom dollar. A deal probably will be struck on Saturday because neither Greece nor the other Eurozone nations want to see the Eurozone start to break up, but Greece’s situation will be all the more hopeless by fall. (“Predicting a 2015 Economic Collapse“)

Greece did default on its debt to the IMF and other creditors last summer, and Europe did strike what I called the “eurodeal” with Greece (and it was not an easy deal to strike, involving the resignation and re-election of Socialist party leader, Alexis Tsipras, Greece’s Prime Minister, and a referendum to the Greek people and during all of that a closure of all Greek banks).

Now, it is fall, and the Greek situation is returning to look just as chaotic as I said it would by fall. After the final eurodeal was was laid out in July, I said the deal was self-defeating and said again that it would create great strife later in the year:

The deal force-fed to Greece by the Germans guarantees Grexit 2015…. This new eurodeal creates all the chemistry necessary for an explosion. Yet, the stock markets rose today because people are excited that, at last, a deal is within reach.

The government will either fall apart arguing over the humiliating terms thrust upon it, thanks to its own leader; or it will face utter rebellion in the streets…. the play unfolds in days ahead in ways that are certain to create disillusionment, depression, rage, chaos and anarchy that still lead to a Grexit….

Despair will spread through the streets like the darkness of night…. Expect more riots in the streets. Expect the government, if it accepts this tragic plot, to be thrown out. Expect things to fall apart as despair gives way to rage. (“GREXIT 2015: Europe self-destructs but doesn’t know it yet“)

That was the prediction. While the leftist government has not been thrown out (so far), the rest has been coming true this week in the news as if it were scripted by my own predictions:

Striking Greeks took to the streets on Thursday to protest austerity measures, setting Alexis Tsipras’ government its biggest domestic challenge since he was re-elected in September….

Flights were grounded, hospitals ran on skeleton staff, ships were docked at port and public offices stayed shut across the country in the first nationwide walkout called by Greece’s largest private and public sector unions in a year.

As Greece’s foreign lenders prepared to meet in central Athens to review compliance with its latest bailout, thousands marched in protest at the relentless round of tax hikes and pension cutbacks that the rescue packages have entailed.

Tensions briefly boiled over in the city’s main Syntagma Square, where a Reuters witness saw riot police fire tear gas at dozens of black-clad youths who broke off from the march to hurl petrol bombs and stones and smash shop windows near parliament.

Some bombs struck the frontage of the Greek central bank. (“Striking Greeks Take to Tension-filled Streets in Austerity Protest“)

While the US stock market stupidly rose last summer because of false hope over the eurodeal, this week it fell because of what that eurodeal is actually causing. Had those investors put any stock in what I say, they would have known there was nothing in the eurodeal last summer to get excited about. It was purely a time bomb for disaster this fall. (And now the timing couldn’t be more precarious because it will match up with the Fed’s anticipated interest increase.)

They will know for certain they are in a debtor’s prison for the remainder of their forsaken lives…. Grexit 2015 starts with all Greeks being rounded up, thrown into a German-built stallag and then being starved for years to come. The new deal assures that, until the Greeks make reparation to Germany for all their debts, they will be economically imprisoned under European authority.

As a result of saying that, I felt a certain amount of “uh-huh!” when I read the following comment that was also in the Newsmax article quoted above:

Irini Kasidokosta, 72, a retired teacher who has seen her pension cut by 50 percent over six years … directed her anger against both Tsipras and the lenders. “I wish Tsipras had done what he promised (to overturn austerity) but they didn’t let him,” she said. “Now we have turned into beggars for a plate of food.”

Another statement I made last summer, which was based on the content of the eurodeal, was that …

…when the Greek government misses any of these targets in the future, as they already have with past targets … then the promised funds will be withheld, assuring the next default, just as recent withholding assured the recent default.

While that was written into the terms of the deal, I was predicting that those terms would have their opportunity to play out. So, it was also no surprise when Newsweek reported this week,

It should be no surprise that eurozone finance ministers failed to agree to disburse 2 billion euros ($2.1 billion) in bailout money to the Greek government today or to release bank recapitalization funds. Despite optimism following the recent announcement of a relatively benign program for recapitalizing Greek banks, it is hard to escape the conclusion that the Greek program again is headed off track.  The government has fallen behind its reform commitments, and a substantial number of additional end-year measures look unlikely to be met…. Ultimately, “Grexit” will become an option again when Greek voters lose patience with the current path being charted by the government. It is hard to predict when it will happen, but hard to imagine another result. (“Greece’s Bailout Deadend“)

I concluded my summer prediction of a 2015 Grexit by saying,

I’d say a Grexit has been assured, and that 2015 looks all the more likely because of the chaos this plan will create in the streets of Athens.

So, it was with another one of those “uh-huhs” that I read the following

As Greece was inching towards recovery mode, a headwind in the form of crippled bailout negotiations seems to have stalled its advancement…. Although the current situation in Greece has surfaced out of chaos, the consensus still sees a strong possibility of an exit from the Eurozone, given the unprecedented advancement of headwinds….  (Bidness-Etc.)

The exit from the eurozone is the only part of my predictions for Greece that has not happened, and the year is rapidly running out. I might fail in thinking it would go all the way in 2015, but the writer above notes in his final line that the possibility of a Grexit from the Eurozone is rapidly speeding up. Others also now see the Grexit as becoming inevitable:

European leaders have told Greece that it must do more to prove it is pushing through the reforms its creditors have demanded before it can receive a €2bn (£1.4bn) aid payment. The debt-stricken country has been at odds with its lenders over the protection it can offer families at risk of being made homeless because of mortgage defaults…. The new sticking point turned the buildup to a key Brussels meeting of eurozone finance ministers on Monday night into a series of tit-for-tat briefings reminiscent of the height of the bailout crisis earlier this year…. the country’s leftwing government under the prime minister, Alexis Tsipras, has stood by demands for social safeguards for its citizens…. This feels like a repeat of 8-months ago. The whole world understood that the third bailout agreement made was unsustainable. It was only a matter of time before it unraveled.  (The Guardian)

After the Grexit will Portugal and Spain exit the eurozone?

What was feared most in the event of a Grexit (or should the eurodeal unravel) is contagion — not so much of financial problems to institutions (though I maintain that could easily be more significant than many are willing to think), but contagion politically to other countries. That is why I also included the following prediction for 2015:

Greece will not single-handedly be the euro’s undoing, but it will be the first major piece of the continental shelf to break away. When that happens in 2015, it will cause the European recession and the flight from European stocks to get worse. The bottom line is that recovery for Europe is a lost concept. (“2015 Economic Predictions“)

Implied in the part I’ve emphasized is that, as Greece breaks away, so will others. That contagion is now developing as the other nations that were a concern back then are following in Greece’s footsteps now:

After opposition parties on Tuesday ousted Prime Minister Pedro Passos Coelho in a vote, the nation of 11 million people awaits President Anibal Cavaco Silva to pick a successor. Leaders of the Socialists, the biggest of the allied parties, have vowed to reverse some measures enforced in exchange for financial aid, while complying with European Union rules.

“Sadly, you only need to look at the recent history of one of our partners in the euro, Greece, and the cost of the alleged end of austerity and the revolt against Europe’s rules to see the effect it has,” Finance Minister Maria Luis Albuquerque said on Tuesday before the vote. “What have they gained? More recession, more poverty, more unemployment and an increase of the dependency on European institutions and the IMF.” (“Portugal in Limbo as Finance Minister Evokes Ghost of Greece“)

Elections in Spain are coming up soon now, too, and Spain is watching closely to see what Portugal does and how it works out. Both countries are anticipated to move to Socialist governments as Greece did in electing Tsipras’s Syriza party..

Spain, Portugal, Ireland and maybe Italy are the nations that were considered most likely to have debt issues that could ultimately cause a breakaway from the euro. That fear was predominant back back when Greece was being forced into greater austerity. Any one of them could be big enough to cause the eurozone to crumble.

To be sure, their problems are not as bad as Greece’s, so it is not certain that any of these countries will break away from the eurozone and cause the euro’s collapse. Yet, things are building fast in Portugal. The government that was just sent packing had only been in office two weeks, making it the shortest-lived government in the history of Portugal. So, clearly anything can happen … and in a fairly short time.

The leftists who overthrew that government intend to reverse many of the austerity measures Europe has forced upon Portugal, just as Tsipras and his Syriza party rose to do in Greece … only to have harsher austerity placed upon them as punishment for uprising.