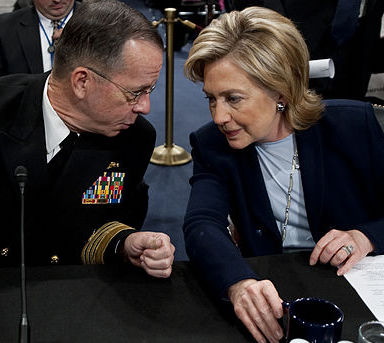 Hell Week for the nation starts on Sunday, and it’s already stacking up to be insane:

This story just came out in the Philadelphia Inquirer as I was finishing the yesterday’s article, “Hillary’s Hell Week“:

Days after searching the Delaware County office of a Democratic grassroots organization for evidence of voter-registration fraud, state police on Thursday raided a second office – this one in Philadelphia.

Pennsylvania is a critical swing state where polls now indicate things are as close as a fifty-fifty tie between Trump and Hillary. Is it any wonder, given this story and others like it that are emerging, that Trump refused to say in the final presidential debate he would accept the outcome of the election? He replied, instead, that he’d wait to see what actually happens in the days ahead.

Russia on her radar

Things are moving fast as we stand on the cusp of Hell Week. Here is another even more significant story that was published by NBC News just as I was finishing yesterday’s article:

U.S. Govt. Hackers Ready to Hit Back If Russia Tries to Disrupt Election

U.S. military hackers have penetrated Russia’s electric grid, telecommunications networks and the Kremlin’s command systems, making them vulnerable to attack by secret American cyber weapons should the U.S. deem it necessary, according to a senior intelligence official and top-secret documents reviewed by NBC News….

U.S. officials continue to express concern that Russia will use its cyber capabilities to try to disrupt next week’s presidential election. U.S. intelligence officials do not expect Russia to attack critical infrastructure — which many believe would be an act of war — but they do anticipate so-called cyber mischief, including the possible release of fake documents and the proliferation of bogus social media accounts designed to spread misinformation….

Sounds to me like the Obama administration anticipates some seriously bad news for Hillary is going come out before election day, and the administration already plans is to blame it on Russia and claim it is false info. NBC News indicates the US is on a stance for possible real cyber war with Russia in the week ahead.

Russia has already demanded the US reply with an explanation to this announcement.

If no official reaction from the American administration follows, it would mean state cyberterrorism exists in the US. If the threats of the attack, which were published by the US media, are carried out, Moscow would be justified in charging Washington,” Russian Foreign Ministry spokesperson Maria Zakharova said, according to the ministry’s website. (RT)

A few weeks ago I laid out in an article about “Hillary’s Reset Button” how Hillary and Obama seemed to be pressing relentlessly back to a cold-war status with Russia and toward a hot cyberwar.

Hillary and Obama have been saying for weeks now that Wikileaks info comes from Russia. Sounds like they are laying the groundwork to treat the next release by Wikileaks as a declaration of cyber war from Russia and have positioned the US to retaliate if another Wikileaks release occurs. They have made their intent clear in an official warning to Putin:

Administration officials did, however, deliver a back channel warning to Russian against any attempt to influence next week’s vote, officials told NBC News.

The New York Times, the FBI, and Wikileaks leader, Julian Assange, all stated last week that Hillary’s claims that Russia is hacking Democrat emails are wrong. Contrary to what Hillary’s campaign and the DNC have said, no US intelligence agencies have said they have proof that Russia provided these documents. All they actually said was that the hacking of such documents looks like something Russia would do; it has Russia’s M.O. They haven’t even claimed to have a Russian IP address associated with the document hacking.

That kind of leap of logic is similar to the leap intelligence made in the Bush era when it claimed based on circumstantial evidence that Iraq was creating weapons of mass destruction. Once again, we could be going to war — this time cyberwar — because an administration is leaping to the conclusions it wants from intelligence agencies to justify a war it seems to have been resetting us toward for years.

As the following chart by Doug Short of Advisor Perspectives shows, three major stock exchanges are bear markets. Germany and Japan joined China for an icy plunge in the polar bear club on Friday: 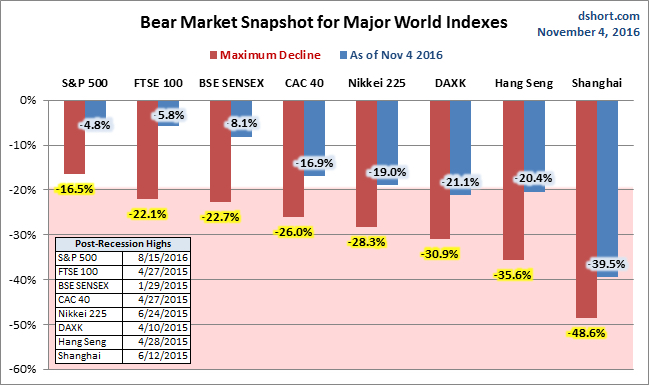 The column chart is sorted by the least to worst declines from previous peaks as of the week’s end. Seven of our eight watch list indexes had dropped into bear territory (a 20% decline), the S&P 500 being the sole exception. As of the latest close, three indexes are in the bear zone, up from only one last week. The long-term resident Shanghai was joined by the Hong Kong’s Hang Seng and Germany’s DAXK.

Another graph of interest from the LA Times shows that Trump has moved to a five-point lead over Hillary since the FBI released its announcement about finding Hillary’s emails on Anthony Wiener’s computer and reopening its investigation of her based on this new evidence.

The University of Southern California and the Los Angeles Times “Daybreak” poll tracks about 3,000 eligible voters, asking on a weekly basis about their support for Hillary Clinton, Donald Trump or other candidates as well as their buy zolpidem in south africa likelihood of actually casting a ballot. There site says the poll is updated daily based on the weighted average of poll responses over the previous week. That means results have less volatility than some other polls, but also means the poll lags somewhat in responding to major events in the campaign.

Looks like the election could be a ninth-inning upset of the Hillary victory that the US stock market has priced in and that liberal Democrats have believed in. If that happens, as I’ve said here is likely, expect the game to go into a tenth inning after the election in which Hillary and her Democrats refuse to accept the election results. They will do what they said was absolutely unprecedented and unconscionable when Donald Trump honestly said he might not accept the results.

Maybe somebody should ask Hillary now if she will accept and abide by the election results once they are in. 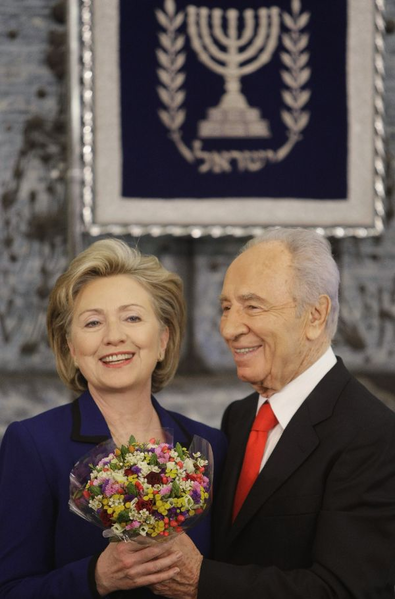 A couple of weeks ago, I revealed that my own research into Wikileaks’ Clinton Collection turned up a US Department of State paper that clearly proved Hillary has been an all-out warmonger behind the scenes. It not only documents what later became a well-known fact — that she advised the president to overthrow the Qaddafi regime in Libya — but it connects the dots to show she recommended that action in order to pave the way for overthrowing the Assad regime in Syria and then connects another dot to show that the US war against Assad began in order to placate Israel so that Israel would not scuttle the president’s nuclear negotiations with Iran by bombing Iran. What a nasty web of wars!

To me, that was the most damning of all of emails in the Clinton Collection. It proved conclusively what I had suspected about Hillary for a few years based on the scorched earth trail she left behind everywhere she travelled the world as Secretary of State. The emails also showed her  advisor’s suggestion that Obama step away from Egypt’s President Mubarak and let the Muslim Brotherhood overthrow the Mubarak regime which had long been an ally of the US, and it suggested the war against Qaddafi could be headquartered in the Benghazi embassy. I offered my own opinion in that article that Hillary’s efforts at regime change made George Bush look like a piker.

But today (Saturday) Wikileaks’ founder, Julian Assange, says there is an email that he finds to be the most damning of all. In the following video, Assange claims that Hillary’s emails prove she was aware that the governments of Saudi Arabia and Qattar were secretly funding ISIS, not just rogue citizens in those nations. The video states that these governments gave massive donations to the Clinton Foundation at the same time that Hillary’s Department of State approved massive arm sales from US manufactures to these governments, which Assange describes as “the largest ever arms deal in the world [which] was made with Saudi Arabia.”

Assange points out that, during Hillary’s tenure as Secretary of State, total arms deals with the US doubled. No wonder the establishment loves her. War is great for numerous US manufacturers and is great economic stimulus … so long as your own nation isn’t getting blown up. As Assange says,

She’s a centralizing cog [between big banks and national agencies]…. She’s … the centralizer that interconnects all these cogs. She’s the smooth central representation of all that …. what we call “the establishment — the DC consensus.” 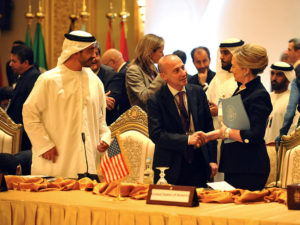 By designman78 [CC BY 2.0 (https://creativecommons.org/licenses/by/2.0)], via Wikimedia Commons

Assange mentions one particular document that laid out all of Hillary’s initiative in the overthrow of Qaddafi, a document intended for use in her campaign later after the Libyan revolution was a success (which it never became and, so, hasn’t been used by her campaign). He describes why the Hillary’s overthrow of Qaddafi resulted in the huge migration crisis that hit and destabilized Europe.

Like all US efforts at regime change, Libya and Syria are complete humanitarian disasters and have become perfect incubators for the world’s worst terrorist organizations.

In another article, “Wars and Rumors of Wars Abound,” I laid out how many wars the Obama administration has entered the US into or appears to be in the process of entering and particularly its march to cyberwar with Russia. We seem to be rushing toward a Russian war based on rapid assessments of vague intelligence that are seeking either a predetermined or prejudiced outcome.

Consider also that the Obama administration already carried out the world’s first illegal act of cyberwar when Obama gave the orders to launch the Stuxnet virus when it destroyed Iran’s centrifuges. In the very least, all of these US threats of cyber retaliation against Russia coupled with our previous involvement in cyberwar create a tinder box that assures us, should Russia be attacked electronically by anyone, the US is the first nation Russia is going to blame.

Has anyone stopped to think that Russia may choose to retaliate against the US for its own internal cyber problems before taking the time to find answers. If the US doesn’t intend to make a move against Russia, why telegraph threats that set it up to be blamed if anything happens in Russia’s cyberspace? With all of the money the US has poured into developing cyber offense capabilities, it has done very little to protect its own cyberspace from destruction.

The US government has now also issued terror alerts for Texas, Virginia and Manhattan on election day. No one seems to have any idea what the alert is about, just rumblings.

And all of these are just the things that happened in the news since I published yesterday’s article. So, the scene is fully set, and all hell could break loose in the week that is about to begin.

… again right after I published this article

… the NEXT crazy event happened: