Here’s You and Here’s the Top Ten Percent 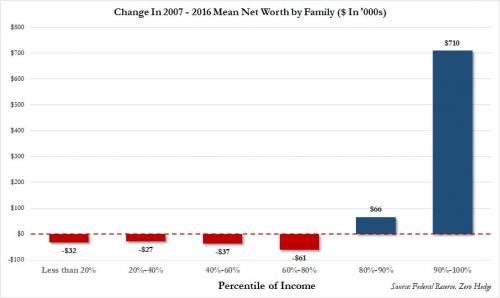 In a nutshell, here is a graph that summarizes everything you need to know about the unsustainable US economy. Unless you’re in the top ten percent of income producers in the nation — or, at least, living in their neighborhood — you are living in a dingy bedroom economy that has only seen its net worth decline since the Great Recession began. Those who are in the top ten percent, on the other hand, profited astronomically from the Great Recession. It’s the best thing that ever happened to them, and you helped them do it with tax-backed or even tax-funded bailouts and by allowing them a perpetual cycle of savings on their capital gains.

Clearly the only ones who “recovered” are at the top

Lower taxes for corporations may be a good idea (why tax the economic engines and rob them of fuel) if they also come with the end of loopholes (corporate welfare) and with a provision that the corporation cannot be engaged in any corporate buybacks during that tax year or the following. (Without that provision, lower corporate taxes will just fuel useless stock buybacks, making the rich richer, but doing nothing to grow the corporation and grow jobs).

Capital-gains tax breaks, on the other hand, have always been a terrible idea. The notion that such breaks cause people to reinvest their tax savings into creating new factories and jobs is not only proven wrong by thirty-plus years of history (see chart above for just the last decade of decline), but it is ludicrous in concept (even without historic proof):

Why would you reinvest your tax savings from your capital gains (say from the sale of stocks) into building a new factory? Why would you EVER do such STUPID thing when your government is assuring you that you can just buy and sell stocks the rest of your life and get taxed at a special lower rate? Why, especially would you do such a dumb thing when your central bank is assuring you they will keep fueling rising stock prices by giving speculators more free money to invest?

If you ignore the government’s double enticement to simply buy and sell stocks and, instead, reinvest your tax savings into building a factory, you have to …

Then, after you have done all of that, you are assured that any of the money you make at that hugely laborious enterprise will be taxed at a higher rate than your first money was taxed at because it is all ordinary profit. Why on earth would you do all of that when you can simply keep making money off of capital gains from speculatively buying and selling stocks in a market supported by your friendly central bankster while paying lower taxes for taking the easy route and, so, multiply your money faster?

No investor is that dumb! And, yet, Republican politicians continue to parade the lie that a lower cap-gains rate stimulates the economy. Worse yet, blue-collar Republican voters keep believing the lie. Lower cap-gains tax rates just stimulate capital asset markets, raising housing prices and raising stock prices and raising the prices of football teams. It’s all easy money that produces NOTHING!

Continue to fall for voodoo economics if you want to, but then you deserve to remain in one of the lower bars in the graph above for the rest of your declining life. Or admit you’ve been swindled. Own your own part in being foolish if you bought into the trickle-down lie, and then direct your anger at those who swindled you and start clawing back those ill-gotten gains (through legal means, of course).