Here’s a scary chart. Over the past three years, U.S. housing prices have risen as quickly as they did when the Federal Reserve was fueling the housing bubble with cheap and easy credit. That blew up in a housing market collapse in 2007-2009. Prices are also nearing the same peak price as their earlier crash point: 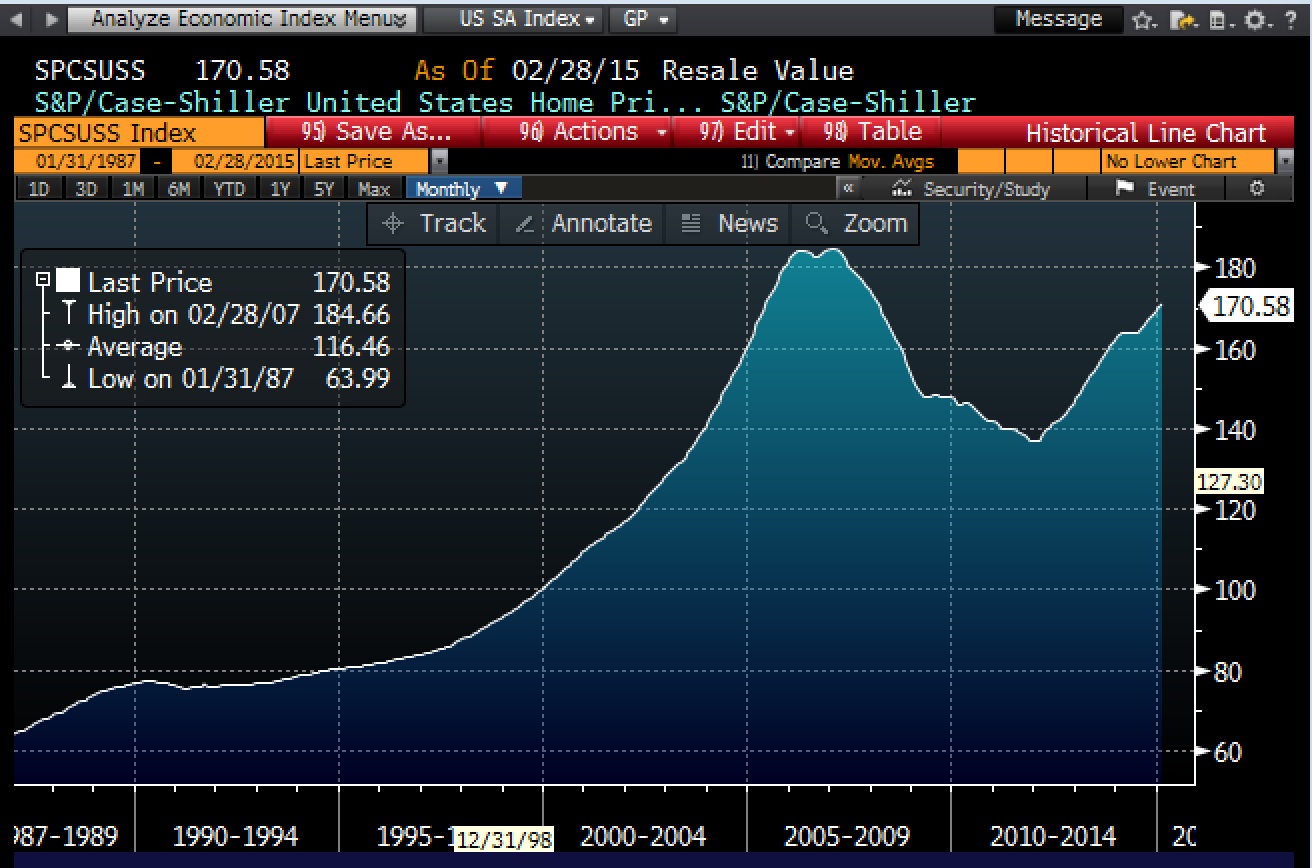 Another housing market collapse is imminent

While the Fed says that their massive money printing is not creating another bubble — “We see no evidence of any bubbles” — both the stock market and the housing market have been rising as quickly as they were during the last bubble where stocks and housing soared together. They are also nearing the same peak. And in my never-so-humble opinion, they are just as certain to crash soon as they were last time.

For some reason the Federal Reserve does not consider the huge inflation in housing prices or in stock prices to be a form of inflation. As a result, they naively believe they are creating money without creating hyper inflation. They are simply looking for inflation in the wrong places. If they were printing cash in large currency amounts, it would be happening where people spend their coins — on the smaller stuff. Because they are creating all the new money as ones and zeros inside the reserve accounts of major banks, the inflation is happening where major banks spend their money — on major assets.

And then there is the condition of those agencies that support the housing market like Fannie Mae and the FHA. Writes Jim Quinn on the Contra Corner:

Edward J. Pinto, a former Fannie Mae official, estimates that under standard accounting practices the agency is already insolvent to the tune of $25 billion. Mark to fantasy accounting hasn’t just benefitted the criminal Wall Street cabal, but also the bloated pig government housing agencies – Fannie, Freddie and the FHA. The FHA’s share of new loans with mortgage insurance stood at 16.4% in 2005 and currently stands at 44.3%. This is a ridiculously high level considering the percentage of first time home buyers is near all-time lows and low income buyers have lower real median household income than they had in 2005. Distinguished congresswoman Maxine Waters, who once declared: “We do not have a crisis at Freddie Mac, and particularly Fannie Mae, under the outstanding leadership of Frank Raines.”, prior to them imploding and costing taxpayers $187 billion in losses, thinks the FHA is doing a bang up job. Her financial acumen is unquestioned, so you can expect another bailout in the near future.

Whether the housing market collapses first or the stock market or the bond market, they will all likely disassemble together, as one puts pressure on the other and the whole economy disintegrates. The resulting economic collapse will be the worst the world has ever seen for the reasons given above (and many others).

The governments of this world will have to invent a new set of tricks in order to bring recovery. They will look for a global answer because this will be a global collapse. They will eventually look toward a global currency as being part of their answer because the internet-webbed world yearns for such a currency and because so many of the old currencies will fail together during the next crisis and because many nations do not like the hegemony of the U.S. dollar and have already started trying to create a different global trade currency.

But all of that is stuff for another article. We haven’t gotten to the Great Economic Collapse yet! I doubt you’ll have to wait long. We’ve learned nothing, and we’re probably even stupid enough to bail the banks out all over again because people want to believe their governments have it all under control.

As a result of such complacency and lack of clear vision about what is really needed, “control” will become the operative word on our shrinking globe. A greater disaster will mean that many people are willing to cede greater control for greater security. (Others may rebel on the fringes, so there will be greater hostility, too, no to mention desperation.)

Collapse of the housing market will just be a result this time, not a cause

Alas, I supersede myself. Let’s stay with the present situation: a collapse of the housing market, based on the chart above, would appear to be within a two-year horizon if prices continue rising at the same rate and then the market fail at the same point.

However, I doubt the U.S. stock market has anywhere near that long to go before it crashes, as it is already flatlining; so, a stock market crash will bring the house of cards down before houses fall on their own. However, I doubt the bond market has even that much time, so it may bring down the entire monstrosity of an economy that the Federal Reserve and other central banks have created even before the stock market crashes. I mean consider the oddball fact that, for the first time in history, people are buying bonds that they know will lose them money. There must be a lot of major investors thinking they will lose less on the bonds than they will on any alternatives.