Home » Economic Predictions » You Could Get Mad as Hell and Just Not Take This Anymore!
« Goldman’s Stacks of Gold
COVID Brings New Hope to First-Time Home Buyers »

You Could Get Mad as Hell and Just Not Take This Anymore! 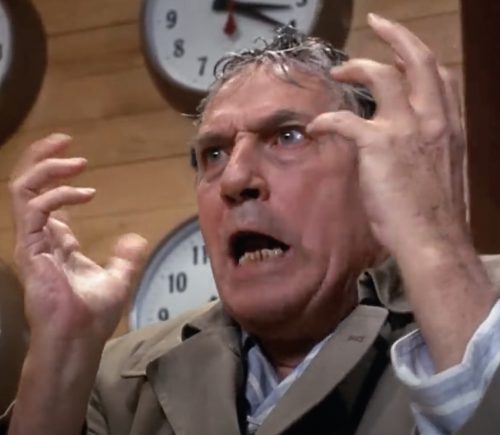 It’s time to show you’re Fed up! Get mad as hell! Don’t take this any more! Scorch the earth with your rage! Yell from the rooftops! Stick your head out the window and scream! Fight the economic injustice that serves the rich! Kick political asses, and kick them hard! Don’t just whine, do something about it!

2) Force-feed the Fed to target a “symmetric” inflation rate of 0%, instead of targeting 2%, which is nothing but a promise your wealth will be endlessly pulled away from you so that you don’t save for your own self-preservation. It encourages you to take on debt. Forget about the gold standard; that’s wistful thinking. In the past, it resulted in the government seizing all gold and taking control of gold prices. Take a practical attack, and simply limit the Fed to maintain zero inflation. That would hugely reduce the Fed’s power and strip it of its ability to manipulate the economy and the stock market to the advantage of the top 1%. People have the power to force their government to make this change, whether the government thinks it’s a good idea or not. Use it!

3) Require FULL auditing and disclosure of ALL Fed transactions with ALL institutions, but limit the disclosure of transactions to, say, five years after the fact so that disclosure does not cause bank runs. That cuts off the Fed’s argument against full disclosure. Knowledge that everything will eventually be brought into complete daylight will go a long way toward curbing corruption. Daylight the Fed and the world of finance.

4) Put Glass-Steagall fully back in place as an essential firewall that was created in the last depression to limit how banks can play in the stock market. Because the Fed has unlimited power to create money for banks, it has unlimited power to manipulate stocks even without its dual mandate pressing it to manipulate the market. So, put the firewall back up. Everything has gone to hell in a hand basket since Glass-Steagall was taken down.

5) MAKE STOCK BUYBACKS ILLEGAL AGAIN like they were for DECADES! They may have legitimate purposes, but those are hugely outweighed by their illegitimate purpose, which is to manipulate stocks up and to avoid higher taxes for stockholders! (Giving wealthy corporate owners their cut of profits via buyback enrichment means their profits get taxed less as capital gains, rather than as they would be taxed if distributed as dividends). It’s nothing but a tax loophole that serves the rich!

6) Get rid of the hideous special capital gains tax rate that has done nothing but enrich the rich and create wealth disparity! It doesn’t help 401Ks, which are tax-exempt; so it doesn’t help the average person in stocks, other than by driving more money into stocks in an endless cycle to pump up stocks into bubbles that crash and wipe out retirement accounts. The trickle-down lie doesn’t even pass the common-sense test! Why would anyone invest their savings from their gains into creating new factories and creating more jobs when everyone knows the money you make years down the road by that hard route will be taxed at a higher level than if you just recycle the money into stocks and make your gains the easy way??? It’s a self-defeating concept. Low taxes on capital gains, assure money just endlessly spins in stock cycles, rather than actually gets invested in company development and productivity and other things that develop our economy. It’s nothing but a savings for the rich! And it never trickles down! Make capitalism serve everyone equally by taxing everyone equally. Why do we continue to allow a huge loophole that assures the rich actually pay a lower tax rate on most of their income than the middle class who cannot afford to play in these risk markets???

7) Stop socializing the losses of the so-called capitalists! George Bush claimed he had to give up his capitalist principles to save capitalism with bailouts. Bull$&!! He saved capitalists by socializing all their losses. He stabbed capitalism in the back! Capitalism only works if it burns out all the deadbeats by making them own their own failures. We have a nation run by corporate giants who are wholly capitalists when it comes to hoarding all their gains, but wholly socialists when it comes to offloading all their losses or the risks from their losses onto tax payers. Stop this stupidity! Kill it! Dead! You have the power to take over with your vote if you can wake up the sleeping masses to know they are being skinned while they sleep. So, wake them up! Yell at them until they crawl off their crumb-covered couches!

8) Rewrite corporate laws to assure corporate execs and board members are personally at full risk for their poor decisions. Why did we let the people who wrecked the entire world with the Great Financial Crisis get richer??? How dumb can you get? Tighten up corporate law to strip all board members and all top executives of all their stock ownership in any kind of bankruptcy. EVERY PENNY of stock ownership in the beleaguered company or of bond ownership must be stripped away entirely from the captains and top crew if their ship goes down. Last time around, we even allowed their bonuses just so they would keep running their companies! Who cares if they keep running their companies when they are the ones who ran them into the ground because of their unpoliced greed?! They are not indispensable as they pretend to be. Let smarter people from smaller companies fill their places if they quit. Who cares??? That was a bonehead argument in the last crisis, and we sat back and allowed it to happen!

9) If the principals do anything that is criminally negligent or outright illegal, put ALL of their personal wealth at risk, and put them in prison for as long as possible! Corporate law should NOT shield any part of their personal wealth if they make grossly negligent or fraudulent decisions. So, all their homes, their cars, their boats, their art, their jewels, their stocks and bonds, their offshore accounts — everything you can find and put your hands on — should by law be sucked back to pay what the company going bankrupt owes or the costs of criminal pursuit for the federal or state government. We created corporations by writing corporate law. We can recreate them to serve the public good. Drain the corrupt rich executives until they’re DEAD! Laws CAN be rewritten to make that a fact of life for those who think they should be in the corporate driver’s seat. You want the big bucks and the glory, then take all the risk and responsibility!

10) Bust up corporations, especially banks, that are too big to fail! Why did we acknowledge they were “too big to fail” and then allow them to get even bigger, instead of breaking them down like we did with AT&T? That’s insane! End this conglomeration corporate-power madness! Save the employees by putting failing companies under temporary trustee control and letting the executives and stock holders perish in bankruptcy court, while parsing the companies down into smaller parts in the bankruptcy process. Stop allowing companies that are already too big to fail to conglomerate even more!

YELL! Am I yelling with all of these capitals and italics and exclamation points? You’re damn right! SO SHOULD YOU BE! YELL YOUR HEADS OFF! NOW OR NEVER BECAUSE THE BAILOUTS ARE ALREADY HAPPENING EVERYWHERE! SCREAM TO THE MOON! The rich are getting richer again! So, take command! Demand these sensible changes! Beat the establishment before it beats you into the dust again! If you don’t, you can just lay back and die on your couch and deserve the dust that covers your crumby corpse for being so complacent! This is still a democracy, though a damned poor one; so, use it while you still can!