Home » Uncategorized » Further Proof Immigrant Labor is Cause of Stagnant Wages
« Epocalypse Coming: Fed Reserves Right to Raise Interest at Worst Time
The Grexit is Back »

Further Proof Immigrant Labor is Cause of Stagnant Wages 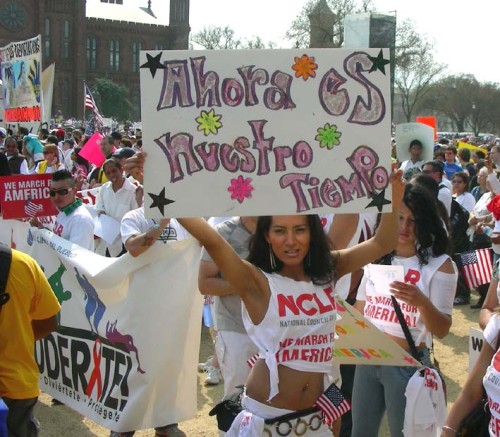 The number of employed immigrant laborers in the US hit an all-time high in October, increasing by 192,o00 in October. Interestingly, in terms of the argument I have been running on this site, they have a much lower unemployment rate than native-born Americans. The migrant unemployment rate is running at an enviable 4.4%. This rate is for legal and illegal immigrants combined, as the Bureau of Labor Statistics does not distinguish between the two in the data it compiles. Natural citizens should have it so good.

Other data from the BLS shows that there are 3,745,000 more migrant workers employed today than when President Obama took office. That is 3,745,000 of the jobs that were “created” during Obama’s reign that have gone to immigrant labor.

So, do the math: Since there have been 8.7 million jobs created under Obama, more than 40% of all the new jobs created have gone to immigrants. Don’t you think that is just a little bit disproportionate to their percentage of the total labor force? Immigrants, who comprise about 17% of the total labor force, are getting 40% of all the new jobs. We are treating our natural-born citizens with contempt.

Is it any wonder where to buy ambien over the counter then, as the immigrant labor population has increased dramatically, that wages and share of income have gone down for 90% of Americans? Most migrant laborers are willing to work a lot cheaper than native-born American workers because anything is a lot better than what they left. And that is exactly why native-born Americans find themselves competing for jobs at lower pay than they are willing to take. Many native-born Americans have stepped out of the work force (become “non-participating”) because they will not take those new jobs that are replacing the ones lost to the Great Recession at the lower wages and lower benefits forced by migrant competition.

That’s how the nation’s “job creators” have used the Great Recession to reduce their labor costs in order to increase profitability for share holders, and that is why the size of the non-participating labor force has skyrocketed.

This isn’t hatred. It’s just math, and I present the truth here, no matter how unpopular or politically incorrect, and even if it loses me some of my valued immigrant friends because to do otherwise is just more economic denial.

More reading about the effects of rampant rise in immigrant labor