Home » Uncategorized » Inflation Flying in Hotter than Ever!
« As another Inflation Foreshock Rattles Markets Around the World, Fed not Fazed
The Fed’s Argument That It’s Not Directly Financing Government Debt Finally Fails »

Inflation Flying in Hotter than Ever! 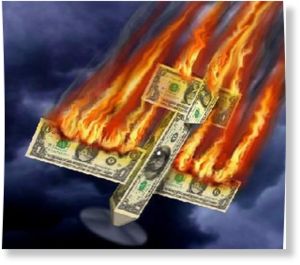 All those economists who went along with the Fed’s inflation-is-temporary-and-going-per-plan narrative are stunned by the data they now see coming in. They shouldn’t be, as it was predicable. However, they will need to get bigger charts to make room for it. Notice where the last ten data points for the increase in inflationary surprises are located (look up to the far, top right corner of the chart):

The chart shows U.S. inflation data surprises at their highest in the 20-year history of the series, said strategist Jim Reid, referring to a note by equity strategist Parag Thatte. The last 10 data points were “almost off the chart,” he noted.

So much for the high inflation print in April being due to “base effects.” The surprise index reveals whether inflationary data is higher or lower than economist expected. It’s hard to claim that the base effect from last year’s COVIDcrisis resulted in more surprises to economists, given those economists were all trying to claim inflation was going to rise due to a base effect before April’s hot print. How can you surprise experts who are expecting the base effect when every one of them knows exactly where the base was last year? If you’re going to claim an effect due to the base — the starting point — there is no surprise at what that starting point was … only at where you ended up.

Comparisons with year-ago price levels depressed due to the pandemic — were also anticipated to spur a run of hot inflation numbers. Those were all among reasons the Federal Reserve had assured it would look at rising inflation as “transitory,” or likely to fade.

A “surprise,” however, means inflation flew in well above the expected “base effect!”

Reid wrote, “these were surely all known about before the last several data prints and could have been factored into forecasts. That they weren’t suggests that the transitory forces are more powerful than economists imagined or that there is more widespread inflation than they previously believed.”

First of all, prices a year ago were not depressed. They just didn’t rise much, so any talk of the base effect is meaningless. April’s 4.2% rise YoY is still a 4.2% rise in one year, regardless of what the year before did. It’s not like inflation has a mind to say, “Oh, I need to make up for last year.” It is what it is.

Stock market coughs up a hairball

Once again, we saw the market choking today on this news, turning from green to red with the S&P rebounding, again, off its 45-day ceiling of 4200. It keeps pounding its head against that barrier but not really busting through because inflation concerns keep grabbing its butt like a junkyard dog pulling someone down off the fence he’s trying to scale.

Reid noted how extraordinary the overall run of inflation surprises has been. As the chart shows, surprises during the 2007-2009 recession were sharply negative and didn’t overshoot afterward. During the pandemic, inflation didn’t undershoot [exactly], but is now “overshooting massively.… The fact that we’re seeing an overwhelming positive beat on U.S. inflation surprises in recent times must surely reduce the confidence to some degree of those expecting it to be transitory.“

A Reverse Repocalypse in the Making?

Behind the scenes of this monetary deluge, the Fed’s essential response to the overnight reverse repo crisis keeps soaring higher, meaning the Fed is having to suck more and more money out of bank reserves. This is the reverse of the repo-crisis problem back in 2019 where bank reserves were starving, and the Fed was having to add more and more money overnight to hold interest down on interbank loans.

A reverse repo crisis indicates too much money is sloshing around in reserves. The Fed is now sucking out nearly half a trillion dollars and rolling that over every night, and is escalating to a higher level each night!

As for the immediate market implications they are even more ominous: either the Fed will have to hike the IOER or rates will soon go negative.

In other words, without this Fed interference we would be entering the bizarre netherworld where banks pay other banks to take extra cash off their hands. Interest On Excess Reserves (IOER) is money the Fed pays to banks to hold more cash in reserves than what the Fed mandates. The interest is offered as an incentive not to loan against the money (which would make it mandatory reserves) when too much money is floating around. “Excess reserves” are money banks are not required to hold in their Federal Reserve Bank account to back up loans, meaning they either are not making or cannot make as many loans as their reserves would allow.

Why would the Fed keep adding money into the system to soak up treasuries and finance the government just to suck it back out the other end? Oh, wait. That question answers itself.

Why would banks not want to keep excess money? Who can ever have more money than they want? Well, it’s not that banks want less money. It’s that they don’t want to hold locked in reserves during times of high inflation. Banks that are expecting high inflation are more concerned with preserving capital than building on it and do not want to hold excess money in reserves that will inflate away in value unless the Fed pays them more money (in IOER) to keep those reserves there. When all the banks have excess reserves, they can’t find other banks who want to exchange their cash for something that compensates better for inflation.

They may even loan their excess reserves to other banks at a slight negative interest rate, if they can find takers, because they think they will lose more in inflation during that same period by holding on to it. So, they’ll trade it for a treasury and pay a little more than the treasury is worth. They’ll pay someone a little to hold the cash just to reduce their losses. If they cannot find another bank that wants to loan them something for cash, they obviously have to pay even more interest to offload their surplus, which they might do if they think inflation is going to be even worse.

That’s when the Fed steps in to avoid a negative-interest spiral — the opposite of the positive-interest whirlwind that hit during the Repocalypse. The Fed can either offer enough interest on excess reserves to offset the inflation banks fear or can trade them interest-bearing treasuries on loan (reverse-repo loans). The pile-up in reserves happens because banks can’t loan out money fast enough because consumers and businesses have as much cash as they care to spend are not as hungry for loans. The system starts backing up.

In short, banks not wanting to sit on cash that is quickly losing value have no one to loan it to because of weak loan demand even at low interest rates; so, they are starting to send money back to the FED for low-interest treasuries that are no risk because the Fed promises to buy them back at a premium down the road.

A key artery of global financial markets may be telling the Federal Reserve that enough is enough. Demand for an overnight funding through the Federal Reserve Bank of New York’s overnight reverse repo program (RRP) has begun to flirt with recent records highs, after almost no one used it for months…. The Fed’s reverse repo program lets eligible firms, like banks and money-market mutual-funds, park large amounts of cash overnight at the Fed in exchange for a small return, which lately has fallen to about 0.06%…. “Why are they going to the Fed?” asked Scott Skyrm, executive vice president in fixed income and repo at Curvature Securities … despite its dwindling returns.

Skyrm’s answer to his question is that Fed QE has hit the steep downside of the diminishing-returns curve to where it is worse than ineffective. (Remember my articles last year warning “The Fed is Dead?”)

This time, Skyrm views high demand for the Fed’s low-return reverse repo facility as a sign that the central bank’s roughly year-old $120 billion-a-month bond-buying program no longer works as intended by adding liquidity to financial markets, and should be scaled back.

If the Fed wants to maintain its 0-0.25% fundamental interest rate and avoid negative interest that the banks are pushing into being, it has to soak up the slop, or banks will go lower just to avoid an even worse hit from inflation. this is the kind of thing I was talking about when I wrote recently that the Fed is going to increasingly find its hand is being forced.

“On March 17, a little over two months ago, there was no volume at the Fed’s RRP window. Nothing. Today, it was almost $400 billion! How do you go from zero to $400 billion in two months? Not only was today’s activity at the RRP one of the largest ever, it was also THE largest non-quarter-end, non-year-end print. There’s an incredible amount of cash in the Repo market right now! Clearly, the Fed took too much collateral out of the market – or – added too much cash. The market is distorted from too much QE and hopefully QE tapering will be announced in June.“

The repo expert sees this coming month as the pressing deadline for the Fed to announce tapering! If the Fed doesn’t act by then, this inflationary whirlwind could build into a fiery tornado.

Of course, if the Fed were to take his advice and announce it is tapering QE, the stock market would crash in a taper tantrum. As I wrote in my last article, the Fed is increasingly being squeezed between a damned-if-you-do and damned-if-don’t situation where it will be forced to deal with inflation, or inflation will do its own ravaging. The knot they’ve tied is rapidly tightening around their own necks.