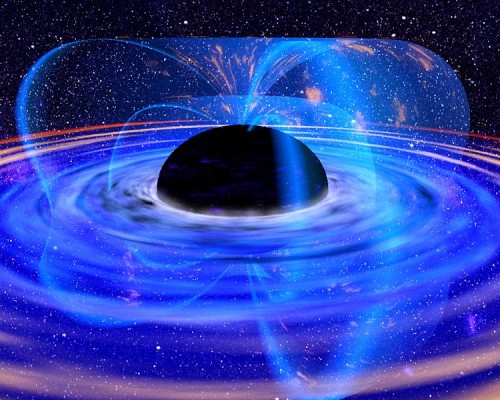 Countering recent US sanctions and President Trump’s talk of ending the “bad” nuclear agreement with Iran, Iran’s president threatened to restart its nuclear program. If his threat is true as stated, he unwittingly admitted something highly supportive of Trump’s position:

Mr. Rouhani said that a reconstituted nuclear program would be “far more advanced,” a veiled threat that the country could start enriching uranium up to the level of 20 percent…. “Iran will definitely revert to a far more advanced situation than it had before the negotiations, not in a matter of weeks or months but in a matter of days or hours.” (New York Times)

If Iran is capable of ratcheting up its program in a matter of weeks to enrich uranium to 20%, that means it has been purchasing and stockpiling all the equipment it needs to do that because such equipment cannot be built and installed that fast. So, the equipment is “stored” in a manner that is ready to go. That, in itself, probably violates the terms of the agreement (known as the “Joint Comprehensive Plan of Action”).

HOWEVER, there is only one way Iran can have the capability to ratchet up production to “more advanced” levels than it had before the negotiations “in a matter of days or hours.” While I have no expertise in such equipment, it does not strike me as the kind of production process where you push a button, and you’re up and running with 20% enriched uranium coming out the other end in a matter of hours.

The New York Times seems to have missed that little tidbit. In fact, all the mainstream media stories today are missing this. Reuters, the BBC, CBS, the Wall Street Journal and CNN are all reported yesterday that Iran’s president said Iran could abandon the nuclear deal within hours. He did NOT say that. He stated quite plainly that Iran could be in “a more advanced situation” than it had before negotiations within hours — not that it could be out of the deal in that much time, but that it could show itself to be in a more advanced situation than existed before the deal.

CBS News almost got it right. They reported the words of the Iranian president as follows:

“In an hour and a day, Iran could return to a more advanced (nuclear) level than at the beginning of the negotiations” that preceded the 2015 deal, Rouhani said. He did not elaborate.

But then they minimized those words in their own reportage to match the rest of the MSM by claiming Rouhani said he could exit the deal in that much time, missing completely the import of their record of his words, which said he could get to a more advanced nuclear level in just that much time. Unlike the rest of the MSM, they did, however, admit,

It was not immediately clear what Rouhani was referring to – and whether he meant Iran could restart centrifuges enriching uranium to higher and more dangerous levels.

There is a huge difference between what Iran’s president actually said and the way the mainstream media is trying to minimize his words. No doubt the MSM doesn’t want to admit Trump was right when he said during the campaign, “Never ever EVER in my life have I seen any transaction so incompetently negotiated as our deal with Iran.”

The words of Rouhani’s nuclear chief below certainly clarify what Rouhani was threatening if some people are finding it difficult to understand (because they don’t want his statement to mean what he appears to have said).

What did Iran’s president actually threaten?

The head of Iran’s nuclear program made clear that Rouhani did mean 20% enrichment and that Iran would be able to demonstrate that ability in a surprising way:

Ali Akbar Salehi, president of the Atomic Energy Organization of Iran, said the country could go up to 20 percent enrichment to “surprise the Americans.” (from The New York Times article above)

The clarification, if it is really needed, is right there in the original story. The MSM just doesn’t want to see it.

It would be no surprise whatsoever to find out that Iran could exit the deal in a day and an hour. It would also be no surprise at all to find out that Iran could build up the resources needed to start enriching uranium to 20%. They’ve already done that in the past. It would, however, certainly be a surprise to many to see 20% uranium being produced in a matter of hours, as that would indicate they were already carrying out such enrichment or that they never got rid of their 20% uranium as the JCPA required, either of which would verify that Trump was right about the agreement being a bad deal.

The only way Iran could now demonstrate production increases to 20% enrichment within hours (or “a day and an hour,” depending on which buy ambien 12.5 mg version of the story you read) is if its equipment is already producing highly enriched uranium so that all Iran would have to do to beat the high levels of enrichment that were known before the negotiations would be to start revealing what they are already producing!

Iran’s existing 20% enrichment fueled the JCPA in the first place. It is why the JCPA required Iran reduce its stock of 3.5% to a level that would not allow it to make enough 20% to become rapidly dangerous. So, how is it that Iran is now able to surprise the Americans with 20% enrichment in “days or hours?”

You can say this is just typical Iranian saber rattling, but since Iran’s president made this statement to the world as an argument against congress’s new sanctions and Trump’s statements that they are violating Obama’s nuclear agreement, I say we take him at his word. It is, after all, his argument as he chooses to make it. His word is that Iran can demonstrate 20% enrichment to the US within hours. (And it’s possible he even meant something more than 20% enrichment. I’m just limiting my understanding of his words to what his top energy dog claimed.)

Prior to the JCPA, Iran was known to already have enough 3.5% in the right gaseous form for further enrichment to make seven bombs if enrichment continued, using the centrifuges Iran already had. So, showing the world some uranium enriched to 3.5% wouldn’t cause anyone to raise an eyebrow because 1) the JCPA already allows that, and 2) it would not be “a far more advanced situation than … before the negotiations.”

In fact, even having some 20% is not a situation that is advanced beyond what existed before the negotiations. Iran already had hundreds of kilograms of 20% enriched uranium prior to the agreement in both solid (fuel) form and gaseous form (ready to be enriched to bomb-grade). That fact alone causes one to lean beyond the nuclear boss’s statement of a surprise at 20%. At 20%, the only surprise could be in how quickly Iran is able to produce that level of enrichment, meaning that the agreement hasn’t curtailed Iran’s breakout time to a nuclear bomb.

How long does uranium enrichment take?

The Washington Institute stated just before the nuclear accord was signed that it would take 18,000 centrifuges (the maximum number Iran was known to own before the agreement) only five weeks to turn the 3.5% level of enrichment that Iran is openly allowed under the accord into enough highly enriched uranium (90%) to make a single bomb (27kg enriched to 90%). That is why Iran was also required under the JCPA to reduce its number of available centrifuges to 6,500.

While that is a rapid leap to a bomb, it certainly doesn’t sound like the kind of fast process that would yield a surprise for Americans in a matter of hours. It takes much longer to enrich uranium up to Iran’s allowed 3.5% than it takes to go from 3.5% up to the agreement-violating step of 20%, which is used in research reactors, and then takes very little time and effort to go from 20% to the 90% used for bombs. So, what level is Iran now at that would allow a “surprise” in mere hours? 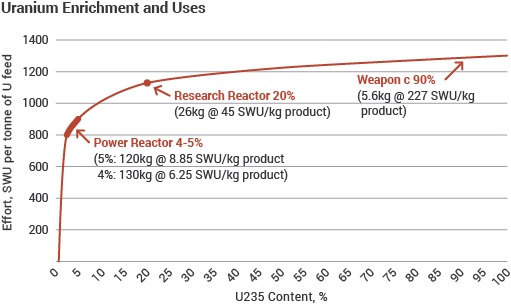 The World Nuclear Association states that restarting centrifuges (just restarting, not installing and building) is a costly process. So, even if Iran’s centrifuges were not taken down as required, simply getting them back online sounds like it takes significant time as “costly processes” on the level of production that the World Nuclear Association cares about do not  happen in a few hours. (Only closely mistakes happen that fast.)

An alternative explanation of the Iranian president’s warning would be that Iran, under the cloak of the JCPA, has managed to acquire and stockpile much better equipment than the already advanced equipment it was required to dismantle by the agreement. The JCPA would, indeed, be “a very bad deal” if it allowed Iran to purchase and store more advanced technology than what it had before negotiations and, thereby, reduce its breakout time to a bomb.