Home » Uncategorized » Labor Dept. Trumps Its Own Numbers
« No “V” in Reco_ery
Magic Monetary Theory Comes at a Price »

Labor Dept. Trumps Its Own Numbers 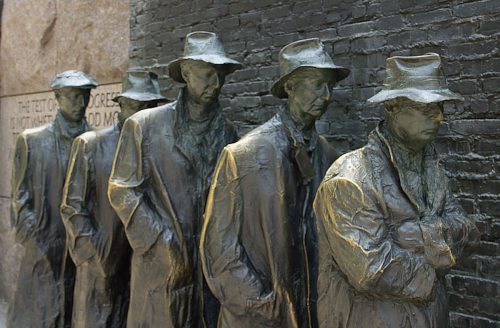 Spin it up, Boys! Spin it up high!

The Labor Department should go into the money-laundering business because they own the fastest-spinning, number-washing machine out there.

Early this week, Trump promised really big numbers would be seen in Friday’s jobs report. Since presidents do not usually get the numbers until just before they are released publicly, I wondered earlier in the week how he would know that.

His early and bold proclamation told me that the president was very involved in seeing how the numbers are coming out. He either knew far in advance of everyone else what the report would say, handy for insider trading, or he knew his top-level appointee was working to massage the numbers in every way possible.

He was certain of good numbers.

Nevertheless, when the report came out today, it was truly abysmal. Yet, the Labor Dept. presented it as good news! What we got, instead of the great numbers Trump promised was some serious Dept. of Labor spin about the numbers:

Today’s strong jobs report completes a full week of encouraging economic news, including growth in manufacturing and services and declines in filings for unemployment benefits. The July job gains, which are the third largest in history, occurred in a period when some of our largest states were tightening restrictions in response to rising coronavirus cases.

–Secretary of Labor Eugene Scalia
US Deptartment of Labor

“The real surprise in this report is that the number of permanent job losers held roughly steady in July from June. That means for every person laid off … between June and July, someone else who had been permanently unemployed was hired.” — Betsey Stevenson, professor of public policy and economics at the University of Michigan and former chief economist at the Labor Department.

However, there was not supposed to be a string of new people laid off between June and July. New layoffs were supposed to stop because the economy reopened for the entire month of June and July, and a huge swath of old jobs was supposed to leap right back as everything went back to being up and running. Remember that?

Things were supposed to improve, not freeze in a permanent slump.

One could have said more accurately said about this report, “That means that for every job that did recover after reopening, new jobs were lost! Thus we saw no improvement in overall numbers for yet another month!”

The president didn’t get the big numbers his labor chief assured him would be coming, so they had to give us big spin!

Steady, permanent job losses are a positive sign??? When did that become positive?

And that is after the economy is supposedly back in business? Recovery of lost jobs ended in just one month?

So, what was the real news?

The recovery could best be described as a bump and slump:

The total amount of recovery pales to the amount of earlier loss, and the rate of recovery went from climbing in June to plunging in July. That’s the real truth here, and even that only skims the butter out of the buttermilk, as I’ll point out below with Wolf Richter’s help.

We reopened, and we’re still in the same mud hole. The mainstream media accepts the government’s numbers verbatim again as usual and milks some good out of them:

The total unemployment level is at 16.3 million Americans, a decline of more than 1.4 million, according to the survey of households. That compares with a peak of nearly 23.1 million in April.

Dig deeper, people! You are supposed to be reporters and analysts.

Those official numbers do not count any of the gig workers (contract workers that are not considered “employees” even though they work for only one employer and lost their jobs) or any of the people who lost jobs but didn’t qualify for unemployment benefits. They account for about half of the total wreckage.

Adding in all the unemployed who are receiving benefits under other programs brings the peak unemployment level to about 33-million!

You see, the real truth is that we are still at the second-highest level of unemployment in US history! The incremental decline in the blue column from the month before represents the great-news drop in unemployment that the department is bragging about and that Trump promised was coming; but the red numbers — those under other payroll protection programs — rose! They rose more than the Labor Department’s numbers fell!

However, by never counting nearly half of the newly unemployed, the Bureau of Lying Statistics wants to graph the unemployment rate out like this:

Hold it! That second little tick at the end — the angle that hardly makes any difference at all — is what the labor secretary called a “strong jobs report” that “completes a full week of encouraging economic news” and referred to as “July job gains, which are the third largest in history?”

Even by the BLS’ extremely information-deprived undercount, the drop in total unemployment would be starting to level out at about the same level as the worst part of the Great Recession! That is, indeed, so encouraging. At best, we are back to the Great Recession at worst!

However, the truth is actually worse than starting to level off at the peak of the Great Recession, and here’s why.

The truth is that, take out the seasonal adjustments,

The total number of people who continued to claim unemployment insurance under all state and federal unemployment programs jumped by 1.3 million from the prior week to 32.12 million….

It boils down to this: The number of initial claims filed under all state and federal programs in the week ended August 1 by people who’d newly lost their work was still catastrophically high at 1.64 million, but less catastrophically high than in the prior week. And some people returned to work, but not nearly enough. So the total number of people who continued to claim unemployment insurance under all programs rose again.

I guess this dismal news that lies beneath the surface of the headline news is why Trump also told us today that he will be reinstating all of the government salvation efforts by executive decree, which included the extra $600 a week in unemployment benefits and the benefit timeline extensions because, without that support, huge trouble will erupt across the entire national landscape in just weeks.

And that’s not good with elections not far around the corner.

On top of those programs, which just expired, President Trump said he’s going to eliminate payroll taxes. Of course, that won’t cost the government much now that so many people are unemployed. You can’t eat payroll tax savings on pay you never made!

“The U.S. labor market continued to gain back jobs lost during the lockdown in July, but at a slower pace than in prior months, as an acceleration in new virus cases posed a challenge to the recovery.… The unemployment rate fell by nine ticks to 10.2%, but that partly reflected a decline in participation in the labor force. July’s print leaves 42% of the jobs lost in March and April recouped, suggesting that there is still a long way to go for the labor market to heal.” — Katherine Judge, economist at CIBC

In other words, we have been reopen for business for two full months now (roughly the same amount of time we were closed for business), and almost 60% of the jobs that were lost did not come back! (Only 42% did.) Wow! If businesses have been allowed to reopen for two months, and have left 60% of the laid-off workforce in the dust, when are those jobs going to come back?

The answer is the one I have been giving all along:

Over a very long period of time.

They are essentially permanent job losses due to deep economic damage that happened to our badly decayed economic structures, and they will only be recovered as the damage is worked through and a new economy is built. Expect that to take years to slowly bring the numbers back to where they were.

Right now, we’re at detente — essentially the same number of new jobs being lost in continued economic meltdown to the number of people being called back to their old jobs. The rate of repair now only matches up to the rate of new destruction.

Or as Nick Bunker, economic research director at jobs website Indeed.com, summed it up,

Nope. Far from it.

Where are we going from here?

Since July, initial and continuing claims have risen, suggesting the worst employment crisis since the Great Depression of the 1930s continues to unfold. New evidence, published Tuesday in a study by Cornell Law School Senior Fellow and Adjunct Professor, Daniel Alpert, reveals the second round of layoffs is becoming more severe as the fiscal cliff begins. The study, conducted from July 23 to August 1 … shows 31% of employees initially laid off or furloughed because of the virus-induced recession were just recently laid off a second time…. Another 26% of those placed back on payrolls report being told by their employer that they may be laid off again.

Guess which one of those two categories comprises the larger number.

The second round of layoffs are happening “in states that have not been experiencing recent COVID-19 surges, relative to those in surging states.”

The bulk of jobs that are going down a second time are in states that are still allowed to reopen. That strongly implies employers in those states either didn’t need as many of their old employees when they did reopen due to decreased customer activity, or that they could not even stay in business due to reduced customers or other problems.

This is permanent damage.

Go ahead and take that out for a spin!

The biggest takeaway from the survey is that there’s no V-shaped economic recovery in the back half of the year, the Trump administration and Congress will need to pass trillions of dollars more in direct payments to tens of millions of broke Americans, or face a crash in consumption. The virus-induced recession has financially ruined the bottom 90% of households….

Putting this all together, Gary Shilling, the president of A. Gary Shilling & Co., recently told CNBC that Wall Street has misread the shape of the economic recovery, as he warns a 1930s-style decline in the stock market could be ahead.