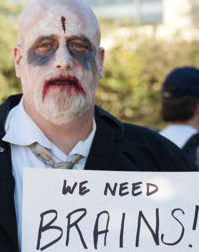 “Asian markets rallied on Monday, extending their gains at the end of last week, following another strong US jobs report that reinforced confidence in the US economy and helped settle trade war nerves.” (Newsmax)

So the majority of investors in Asia (and in the US) see the latest MEDIOCRE-AT-BEST jobs report as assurance that trade wars are not going to impact the US economy.

Hallelujah! How can trade wars impact us with such stellar news on the job front?

Global markets had been tumbling ahead of the imposition of the tariffs but bounced on Friday. The upbeat sentiment carried over into the new week after data showed the US economy created more than 200,000 jobs in June, beating expectations.

Oh my goodness, investors are dumber than zombies on a stick!

WHOOPEE! 200K in new part-time jobs without benefits and a rise in unemployment coupled with persistently flat wages for everyone but the top 1%. We’re on the home stretch to recovery now, Folks!

It’s abundantly clear that Americans as a whole are experiencing the best economy since the Great Recession. U.S. employers are adding so many workers that more people are growing encouraged to enter the labor force. Wage growth is well above the average of the past decade. Corporate earnings remain rock solid. (Newsmax)

Well, hit me on the head with a brick! Is this just shill reporting for the president’s administration? You have to wonder whether journalists should be taking medication for this kind of delusional thinking.

I started writing on the economy after the crash of 2008 because nearly all financial journalists seemed to have lost the ability to think. That would be total job security for me to this day if it paid enough to be worthwhile, which it does not if you do not run with the pack.

People know what news they want to hear and tune in accordingly. You need to have solid credentials in the Republican Club or the Democrat Club or among the NeverTrumpers or with the Trumpettes. You have to join a side to be popular because clearly the majority of people (as these two articles demonstrate) are in deep economic denial and don’t want to read unhopeful economic truth. A full decade after the bust, denial still floods the world as the above article continues to demonstrate with nearly every word: 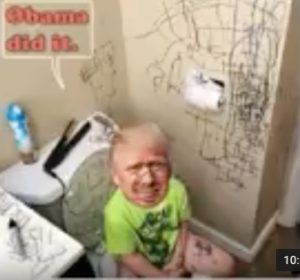 “US employers are adding so many workers?” Really, 213,000 jobs is “so many?” That is the same gradual path we’ve been on for a decade! And that is half a year after the biggest tax cuts in the history of the civilized world! That’s all we have to show for throwing the deficit flood gates wide open again — exactly the same level of job growth we had under Obama before any of the tax cuts? That’s it?

It is not like the difference between 178,000 new jobs one month and 213,000 the next is even meaningful. Its within the range of monthly fluctuation that we’ve seen for years. Typically more than half the jobs added are “seasonal adjustments” or other adjustments made by the Bureau of Lying Statistics. Even if the numbers were solid facts, so what? 213,000 jobs barely keeps up with population growth each month. After all these years, the financial press is still just pumping out the bilge water that gets pumped into it by the government.

“People are growing encouraged?” Who has talked to these workers to know they are encouraged? We have no way of knowing how many of those measly 213K jobs were taken by people who had dropped out of the work force and have now re-entered. Fake news! Are they encouraged that the economy is now trundling along with endless part-time growth?

“Wage growth is well above the average of the past decade?” Really fake news! That one gets the Zombie-of-the-Month brain-bashing prize. Adjusted for inflation, there was NO WAGE GROWTH! Zip! The only thing that happened was that inflation is now well above the average of the past decade, so this vaunted wage “growth” is really nothing more than wages tracking even with inflation. All the repatriation that was reportedly going to be spent, in good part, by corporations on wage improvements has amounted to nothing more than a COLA increase. When one talks trickle-down economics, they need to strongly emphasize the “trickle.” Finally, after all these years of wages sliding backward, we get a cost-of-living adjustment! Praise be to the gods of greed!

“Corporate earnings remain rock solid?” Oh my gosh, People! This is getting so tediously stupid. We hear it over and over like the purr of zombies in the distance bashing their heads again brick walls. Earnings, as in overall pretax profits, are in total stagnation! Over and over, the only thing actually reported about earnings is the earnings-per-share number (EPS).

The supposed rise in earnings that have supposedly kept up with the rise in stock prices so that stock prices are supposedly not overvalued is due to nothing but a reduction in the number of shares over which those reported earnings are divided and a massive reduction in corporate taxes (because EPS is an after-tax report of profits). It is not due to improvement in business activity!

Earnings, as they are exuberantly trumpeted about by market mongers, mask a toxic picture of stagnation when it comes to the declining health of companies and of the US economy. The tax cuts provided an immediate double-impact boost to otherwise horrid EPS statistics by greatly reducing the number of outstanding shares and greatly reducing corporate taxes. In fulfillment of what I predicted for the Trump Tax Cuts, share buybacks have been hyuge. Trump has made buybacks great again!

If you want to read a surprisingly candid article about how the trickle-down tax cuts and repatriation of overseas income, past and present, have done nothing but contribute to stock buybacks and about how those buybacks are being used (exactly as I have said on The Great Recession Blog again and again) only to enrich executives and board members who are selling out their own companies, read the SEC Commissioner’s report here. The smart-money people are dumping at huge rates their own stocks in the companies they manage in order to get out!

Trade problems are over now!

Move along people. Nothing to see here. The trade war ended with Friday’s trade-deficit report.

More good news that saved stock markets on Friday was that trade imbalances between China and the US have already corrected. We can declare “Mission accomplished!” The correction of the imbalance, however, was actually because Chinese industries were stocking up on American goods before China’s own tariffs hit. How does one pan that nugget of news out of the gravel? Simple: note that the big mover for the lowering of the US trade deficit with China in May was soy bean sales — one of the few areas where China has said they will add significant tariffs.

Yeah, that’s salvation! It simply means the trade imbalance will look so much worse in July and August when all Chinese buying of those goods stops because the prudent Chinese all stocked up enough in May and June to satisfy several months of soy-sauce production. Sales of those goods from the US to China were simply moved forward as a way to avoid the cost of tariffs, which you’ll see reported in August (for July) and in September. Nobody in the financial media wrote that, of course; but it didn’t take much shaking out for me to figure it out, and that’s why I do my writing — to report what others do not say by thinking about what others do not think.