There is one reason I’m posting again on my blog and that is that the Federal Reserve lied. The long-promised end of quantitative easing by the Fed last fall never happened, and, strangely, no one has called the Fed on that. I cry foul.

When I bet my blog it was on my prediction that it would become clear, once quantitative easing ended in the fall, that there had been no economic recovery. To my surprise after I stopped writing, a look back at the Federal Reserve’s own statistics reveals that the Fed did not end quantitative easing in 2014 at all.

As soon as the stock market plummeted in October 2014 (just as I predicted it would), one of the Fed’s FOMC members (which regulates money supply) stated there might be a new fourth round of quantitative easing (QE4). Immediately, the stock market bounded back upward in euphoric hope. As it turns out, the Fed continued right into QE4 without saying a further word.

And nobody seems to know it happened.

What does it mean to end quantitative easing?

A central bank implements quantitative easing by buying specified amounts of financial assets from commercial banks and other private institutions, thus raising the prices of those financial assets and lowering their yield, while simultaneously increasing the monetary base.

In other words, it buys those assets from its member banks by creating new money credits in their reserve accounts. Wikipedia goes on to explain the difference between quantitative easing and normal monetary expansion:

So, “to end quantitative easing” would mean that the Fed stopped buying long-term assets, returned to shorter term assets or stopped inflating the nation’s money supply.

The Fed didn’t stop either. So, let’s look at what the Fed actually did, using it’s own charts and graphs.

Why do I say the Federal Reserve’s end of quantitative easing didn’t happen?

I’ve heard no one else say this, but if you look at the Federal Reserve’s graphs of the nation’s money supply in the final quarter of 2014, it clearly continued both its purchase of additional securities and its creation of new money.

First, the expansion of money supply (the nations monetary base) continued right along at the same rate as it did under the Fed’s Q.E. program. Look at the following Fed chart, where M1 and M2 are measurements of the amount of money in circulation:

Let’s look at the same thing via a graph put out by the Federal Reserve Bank of St. Louis, one of the Fed’s member banks: 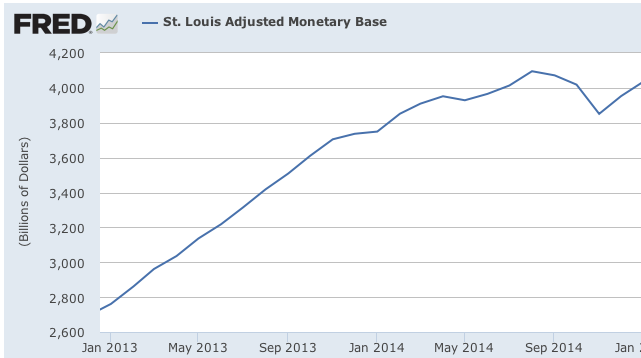 What you see is that the nation’s money supply plummeted in fall as the stock market plunged and then rebounded as the market rebounded. Why did both the market and the money supply rebound. Further investigation shows there is a lot more to it than just the recovery of stock values.

One would expect that, if the Fed was going to stop QE, it would stop adding to its own balance sheet and stop creating new credits in its member bank accounts. When the Fed adds to its balance sheet in to expand money supply under quantitative easing, it creates money out of thin air by creating deposits in the accounts at its twelve Federal Reserve Banks around the nation. This gives the banks more ability to give loans, and those loans are how the monetary base expands.

So, next let’s look at whether the expansion of the Federal Reserve’s balance sheet was the key element of QE3 that reportedly ended in the fall or not. Here’s the Fed’s own graph of its balance sheet: 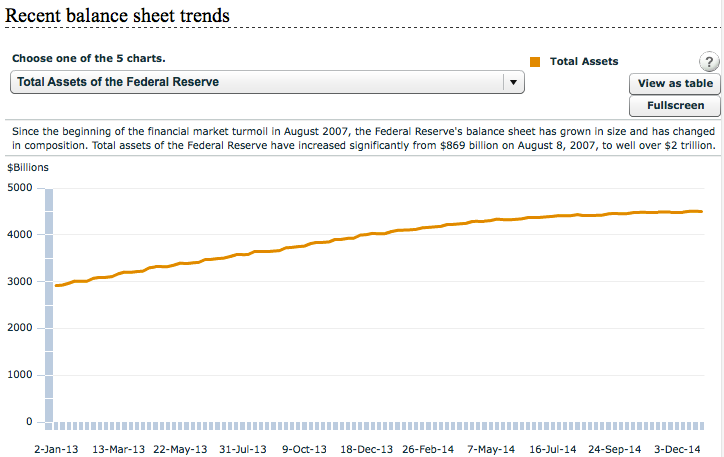 Apparently not. You can see that the rate of expansion in the Federal Reserve’s total assets tapered as the Fed promised would happen back in 2013, but the expansion never ended. Because the graph is in trillions of dollars, the expansion rate appears gradual, but the continued increase in the fall of 2014 amounts to an additional $20 billion from October 31 to the end of December 2014.

Prior to the start of all three rounds of quantitative easing, the Fed had $900 billion in total assets on its balance sheet. At the “end” of all three rounds in 2014, it had $4.5 trillion in assets. One would think, if they were going to end quantitative easing, they would actually start to deflate their balance sheet. In fact, they continued right on increasing it through the end of the year!

What made QE3 different from the previous two rounds of quantitative easing was that the Federal Reserve started buying long-term government bonds from banks. Whereas, under QE1 and QE2, the Fed was buying the bank’s weaselly mortgage-backed securities. You remember those — the derivative bonds that were infused with junk mortgages as a way of hiding the junk. Ugly stuff.

Now let’s look at a breakdown of the Fed’s assets last fall in order to see what the components were that continued its balance-sheet expansion. You can see in the table below that the Fed continued to expand U.S. money supply by returning to its practice of slopping like a hog on these bad bank securities.

The devil is in the details. In this one week, the Fed decreased its holdings in U.S. securities, but only by only $65 million. It had been adding to them at a rate of $20 billion a week at the peak of QE3 and then at a slower rate of $20 billion a month near the end of QE3. So, a drop of $65 million doesn’t role that program back much. However, its holdings in mortgage-backed securities rose by over $13 billion in just one week!

If you look at other Fed charts from October 31 (when QE supposedly ended) to the end of December, 2014, you see that the Fed continued to increase its assets through purchases credited to reserve bank accounts, which adds money into the supply. Over the course of those two months, it increased its holdings of U.S. Treasury notes by $1 billion but increased its holdings of mortgage-backed securities by $26 billion. It also dropped about $7 billion in other assets for a net increase of $20 billion to the funds in reserve bank credits.

That means that after the “end of QE3,” the Fed continued expanding its assets by $10 billion a month. That continues to grow the Fed’s balance sheet much faster than it grew in the years of inflation prior to the Great Recession. The main change at the end of October was simply that the Fed shifted its focus away from the treasury notes bought under QE3 back to the mortgage-back securities of QE1 and QE2. So what!

Why is no one else crying foul on the end of quantitative easing?

Maybe it’s because they didn’t bet their blogs on what the results would be when QE3 ended in the middle of the fall season, which turned out to be every bit as volatile in the overall global economy as I predicted half a year earlier. The Fed repeatedly talked about the end of QE3 as if it were the end of quantitative easing altogether. In reality, the Fed just shifted to QE light (or QE4).

I find it really peculiar that I hear no one commenting on this bait and switch by the Fed.

I predicted the stock market would crash because it has been inflated by the Fed’s creation of free money for its member banks. Naturally, the end of that artificial life support would mean the end of the bull market in stocks. Only, the Fed kept QE going … quietly.

Why would it do that?

I think the answer is simple. The Fed saw the stock market plunge simply out of fear during October because the end of quantitative easing was near, so The Fed leaked out a hint of QE4. That sent the market back up in hope. Seeing both of those responses, the Fed smoothly shifted from QE3 right into QE4 without another word.

Because QE4 is smaller than QE3, the result you see is a market that is no longer rising and can barely hold its top. The market has only to drop before hitting a new high in the months since October. It has risen marginally above its previous high but, again, only to drop back down. . Since October, the U.S. stock market can’t seem to get it together. It’s now an almost flat series of major spikes and equally large valleys.

The big trough in the middle was the October crash that I predicted. While an actual crash was narrowly averted for the time, the market’s dynamics clearly changed from that point on. Since October, the market has had a hard time beating it’s previous peaks; it has become more volatile and is basically running sideways on average, rather than sloping up.

It has not looked like a bull market now for months, even though the market bulls keep claiming the run is still on. That is because there is just enough new money being created now to keep it alive, but not enough to make it grow. The banks continue to use that money to buy stocks; but it’s no longer creating a bull market. The bull’s claims have become false for more than a quarter of a year now!

Why is the Fed silent about QE4

To call the switch back to expanding its balance sheet through mortgage-backed securities QE4 would be to admit that the stock market has become completely dependent on the Fed’s free money. The Fed would be admitting that it couldn’t end quantitative easing as it said it could and would. It would prove that what the Fed did with QE1-3 cannot be sustained without endless QE. So, it prefers not to call this “quantitative easing.” It’s hoping this sort of semi-QE will ween the market away from the Fed’s free money.

As the market now fails to significantly break past its previous peaks, however, more and more people are starting to talk about the end of the bull market. So, as I predicted one year ago, clarity about the world’s lack of recovery from the Great Recession is dawning, but that rising dawn has been briefly obscured (from those who don’t want to see it anyway) by the Fed’s continued creation of money out of thin air.

Another thing I’ve pointed out is that each round of quantitative easing has brought diminishing returns. So, even if the Federal Reserve jacked QE back up to what it was before October, I don’t think you’d see much benefit. Watch the stories of a dying market and withering economy slowly eclipse the optimistic moonshine of the bulls.

For further understanding of quantitative easing: