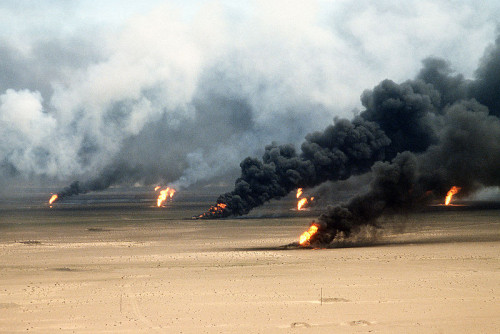 While some business / economic publications, like NewsMax are saying that, “Oil is pulling away from the market’s biggest storm in seven years,” I say, “Don’t believe it.” Not for one second. The real storm begins near the middle of March.

Because people saw that the price of oil rose and stabilized in February and that stocks followed in lockstep, they were quick to conclude the worst is over. The final days of February were, in fact, nothing more than the calm before the main storm. People were, as usual, too quick to sigh in relief, and that relief is likely to make the upset even worse when they find out how wrong they were to think the worst is over. When people believe the worst is over, and suddenly things grow even worse than they already were, they are more likely to panic.

We have seen this pattern of human naiveté again and again during the so-called “recovery” from the Great Recession. What really happened in February was a little consolidation, as both oil and stock caught their breath after a long first leg down in prices, but the worst pressures that I’ve been predicting were never set to come in February, but to start in March.

I am amazed at how these publications continue parroting each other’s statements that the Saudis and Russians achieved a great agreement to resolve the problem of an oversupply of oil. While NewMax points out the many swings the argument took last month and even that the Saudis and Russians really only agreed not to make the problem worse, the article still seems to come down on the side that this agreement means the oil market has now stabilized and prices will rise to $40 a barrel very shortly.

As I’ve laid out in my last article (so won’t go into much detail here), the so-called “pact” between Saudi Arabia and Russia accomplished the exact opposite of what all the parrots are squawking about.

While Saudi Arabia and Russia actually teamed up to make it clear they will not reduce oil production by a single drop to help solve the oil supply problem, four OPEC members, other than Saudi Arabia, also agreed not to make any production cuts. So, oversupply is absolutely certain to continue.

Shale-oil producers may be holding up better than the Saudis anticipated because the major oil producers have the muscle and reserve to make it through the present price wars by changing the focus of their current business activities. They are finding bargains in drilling  costs now as the smaller producers go out of work and people become willing to work for the major producers for less. This is a good time to drill new wells because drilling produces no oil anyway, making it a good time to devote money in that direction. In a large oil company’s planning, it is something that has to be done for future production, so ramp it now by focusing assets in that direction while the costs are lower, and you’ll be set to make big money when prices move back up and those wells become ready for actual production. All of which means, the major US oil companies are increasing their production capacity as the smaller companies around them fail. The failure of small companies also makes for a good time to get good prices on equipment.

It has never been the large oil producers that have been likely to go out of business. The problem is with the numerous small companies that cannot afford to weather a long storm. At least forty smaller companies have shut down since 2014. The rapid growth of many small contractors in the oil industry that fed the US job expansion during the “recovery” period will continue to shrivel, so this consolidation of businesses is bad news right at the heart of the “recovery.” The bonds they have used to finance their expansion will continue to go bust. Many jobs have already evaporated along with the small companies that have blown away in the dusty oil fields.

Not all major oil companies, however, are weathering the storm well. Oil production giant, Halliburton, for example, has already cut over 26,000 jobs since its 2014 peak. Halliburton speaks a very different story to the dominant theme in mainstream media that the worst is over:

“Our industry has turned down faster than anyone ever expected,” Halliburton CEO Dave Lesar and President Jeff Miller said in a memo to employees obtained by CNNMoney. The execs said it’s now clear that business opportunities will be “much worse than anticipated” coming into the year…. Halliburton has also attempted to cope with cheap oil by consolidating facilities in 20 countries and closing down operations altogether in another two countries. The oil downturn has sent Halliburton’s profits plunging. Its stock price has lost more than half its value since mid-2014 when crude prices peaked. (CNN Money)

26,000 jobs cut by just one company is no small dent in the recovery, and Halliburton doesn’t sound like its outlook for the industry is as good now as it was at the start of the year.

In December, production rates finally did start to fall a little in the US as the toll taken by the initial storm finally started to become visible. Production rates are still falling. While the industry is finally starting to feel the crush, that’s not going to be enough reduction in production to help the price of oil in the near future. The US decline in production is minor so far, and the coming combined storms are major.

This month, three storms will converge upon those businesses who focus on the production side of oil.

March madness begins in the maintenance season for oil

I’ve been pointing out for the past couple of months that we were nearing the oil industry’s huge annual maintenance season. This month, we enter it. The big refineries typically shut down a number of operations in March, after heating oil demands and oil-fired electricity demands are down and before summer travel demands for gasoline, diesel, and jet fuel all rise, in order to make repairs throughout their refineries.

It’s a time when there is naturally less demand for oil, so the industries go into maintenance mode. The amount of refining that gets done this time of year drops. That means the backup of oil due to oversupply to the refineries should become worse this month.

It is during this time that I think oil prices could touch down into the high teens, causing more already-marginal companies to throw in the towel.  Numerous small contractors in the oil business will find the toughening situation breaks them, and that means more failing bonds and more strained banks.

[amazon_link id=”0996489703″ target=”_blank” ]Shale Boom, Shale Bust: The Myth of Saudi America  In 2014, something went terribly wrong with this rosy scenario of “Saudi America.” An unexpected collapse in the price of oil is bankrupting the oil patch, destroying jobs and threatening plans for a renewable energy future.[/amazon_link]

Iran is marching forward without a flinch in its plans to ramp up oil production and sales to 2,000,000 barrels per day. They now anticipate hitting that number in March if you combine their crude and condensate sales (fine liquid oil that condenses out of natural gas). That is sooner than they projected a month ago.

While Saudi Arabia and Russia agreed not to expand production further, Iran now rightly points out that the talk of oil production cuts was always “a joke.” There was never a chance, as I also pointed out on this blog, that either the Saudis or the Russians were going to voluntarily cut production in the price war they are using to try to recover market share from rapidly expanding US producers. Their pact really says, “Oversupply will end when enough US companies go out of business.”

With Iran promising to expand production this month (and already succeeding in doing so), and with oil refineries not being able to do much refining, the backup of crude could get large enough to quickly reach the point where there are no tanks left for storing oil or natural gas. That is the major inflection point at which everyone will be forced to slow production temporarily but only because they cannot sell oil at all. I expect that major backup to cause the next severe downward leg in oil prices.

Stocks have been marching in lockstep, so they are likely to also plummet with the greater drop in the price of oil, causing the next leg in the crash of the stock market. As I’ve said all along, that crash will unfold in numerous downward legs, separated by smaller rallies, over the course of a year to a year-and-a-half.

Revelers during the Ides of March will be stunned

While many are blowing their party whistles on the oil-price-stabilization bandwagon, I do have some company in my dire predictions for a short-term oil price crash. Deloitte said in a report a week ago that 75% of oil exploration companies could default on their debt, ending in bankruptcy, where they either restructure their debts or, in the worst cases, go out of business.

Another person who sees the coming storm as I do is John Kilduff, founding partner of Again Capital, which specializes in energy trading:

We’re in the red zone, and we’re about to go over the goal line here for that actual pain point…. The rich are going to get richer, but companies like Chesapeake, unfortunately I think, is among the road kill, Goodrich Petroleum…. We are definitely going to see [$18/barrel oil]…. Now you’re seeing refineries go into maintenance…. Oil is going to back up big time in the system here.  (Nightly Business Report)

As I’ve said, the increased backup of oil will be caused by the perfect storm coming in on the convergence of three different fronts: 1) the agreement by Russia and Saudi Arabia to maintain full-tilt production converging with 2) the post-sanction arrival of Iran back into the marketplace just as 3) the oil industry goes into maintenance mode and so needs even less oil, not more.

Kilduff says he thinks BP is another company that is going to wind up deep enough in distress that it will be bought up by some other massive conglomerate. Kilduff also predicts Chesapeake — a major oil producer and the second largest natural gas producer in the US — will go under. Chesapeake lost more than $14 billion last year on the downturn. It says it will sell off many of its assets this year to pay down its debts. So, the major fire sales are also beginning.

According to Kilduff, we are, just this month, reaching that ultimate pain point. A desert storm is gathering over the oil fields.