Home » Uncategorized » Powell Put Sends Stocks Soaring, Recession Must be Near
« The Great Recovery Rewind: How the Federal Reserve’s Balance-Sheet Unwind is Unwinding Recovery
A Winter Tale of Snow to Remember and Sun Long Ago »

Powell Put Sends Stocks Soaring, Recession Must be Near 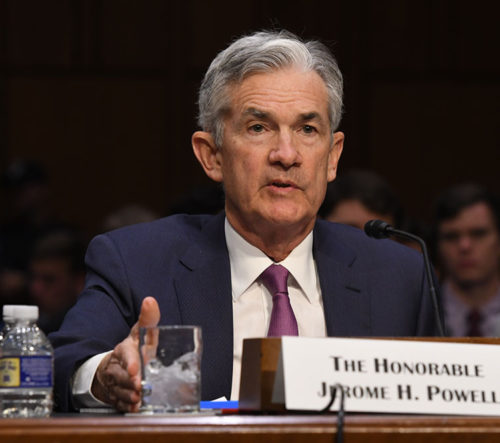 Federal Reserve Chair Jerome Powell placed his put in stocks while saying there is none. When he doubled down today on a more dovish approach to the economy, Powell claimed the Fed is not designing interest rates to keep the market climbing. If that is true, recession must be near:

The Fed sees recession dead ahead. You have only that choice in how to interpret this because the Fed made a major course correction in late December, which instantly saved the crashing market, and today it announced it fully intends to stay the new course while stating that had nothing to do with the market. After all,

Before this statement, the Fed had said that runoff would continue unless there was a substantial risk of a recession.

The Fed’s major course change, then, can only be due to seriously deteriorating economic conditions. The course has downshifted from autumn’s expected 3-4 rate increases in 2019 of its targeted Fed-funds rate to zero interest increases; and it shifted its balance-sheet-reduction from auto-pilot at full speed to manual pilot under a carefully watched speed. Today it doubled down on all of that.

If such a face-losing change of course is due only to economic data, the Fed has surely put us all on economic watch (sort of like hurricane watch or storm watch). After all, auto-pilot was supposed to be as boring as “watching paint dry” according Janet Yellen when she started us down that path.

The myopic market loved this today, and the Dow leaped instantly up about 150 points to close 435 points up for the day!

The Fed’s wording was that it will remain “patient” as it makes “adjustments” to its interest targets and abandons autopilot. Most analysts I’ve read assume that means one future hike this year, while some think it means none and others it means two; but all agree it is well short of the four that were priced in last fall before the market plunged into a bear market. So, the market repriced today to the new reality just as its been repricing since this announcement was tested in December.

“The Fed delivered this double-barreled dovish blast while still assessing that the economy is ‘solid’ – only a slight downgrade from ‘strong’ in the prior statement – enhancing the boost to risk,” said Krishna Guha, head of global policy and central bank strategy team at Evercore ISI.

Oh, then it was to save the market! What else could it be if the economy is “solid?” “Solid” is solid, right? After all the Fed said its economic gauges show …

Here is what was really behind Powell’s words, a concern he voiced long ago:

Earlier this month, when the Fed released the full transcripts from its 2013 FOMC meetings, there was one particular moment of epiphany by now-Chair Jerome Powell, when he unveiled [back in 2013] what the markets have known all along: that the Fed is hostage to the market’s every whim, to wit:

“…The idea that President Kocherlakota said and Governor Duke echoed— that we ’re now a captive of the market — is somewhat chilling to me.

The idea may have been chilling, but unfortunately for the Fed, it’s absolutely accurate, and it’s a fact which traders once again confirmed earlier this year when after the S&P’s near bear market tumble, Powell caved and reversed his formerly hawkish stance.

Fourth-quarter 2018 corporate reports have also been generally positive this month, and stocks are soaring. Powell knows this market rally happened because of the Fed’s sudden dovish turn in December since the market experienced immediate salvation when the Fed pivoted. Everyone knows that is what turned the market around — well, that and help by the banking system’s plunge protection team. Powell clearly fears that fragile salvation will fall apart just as immediately if he were to say anything less dovish, so he went full dove dive today, forcing himself to publicly deny the reality he finds chilling — that the Fed is captive to the market.

The only other reason it would make such a deliberate move that it knows will be seen as being captive to the market would be that it sees big trouble on the horizon for the general economy (now “stable”) … if the Fed were to continue the course it set last fall.

Take your pick — captive to the market or big trouble dead ahead — but either way, the Fed is sharply correcting course (or talking about it) sooner than I thought it would. The sudden change confirms my refrain over the years that the Fed will discover it can never unwind its balance sheet without crashing its fake recovery. I’ve also maintained the Fed’s balance sheet unwind is a bigger problem than the Fed’s interest targets.

The question remains — since this is still talk at this point — will the Fed actually stop unwinding its balance sheet in time to avert the disaster the Fed, itself, has set up and is now triggering … and apparently now sees coming?

Balance-sheet reduction is off auto-pilot, but it is still continuing at the same pace until those who are now watching while firmly holding the wheel, actually turn the ship’s wheel. The Fed has looked ahead, seen stormy waters, and, so, shut the auto-pilot off and backed off the rate-hike throttle. I still maintain, as I always have, the Fed will not back down the throttle on its balance-sheet reduction in time because it has a solid history of backing off on its tightening too late, creating an endless repetition of recessionary cycles.

And what perilous height have stocks reached due to the Powell Put?

As of the market’s close today, stocks have reached the perfect height for a bear-market rally:

And look at where they could wind up by merely returning to their bottom trend. The question is, Will they break the top trend tomorrow and then hold long enough to show its not just a failed test, or will they take the road back down to their bottom trend? How long will the Powell Put last in a new era of thoroughly diminished returns and growing economic headwinds?

The Fed is certainly not acting like this rally means the market is out of the bear’s woods. So, is this a bear-market rally that will soon bust? Consider this analysis and comparison of December’s big plunge and the rally that followed to similar past declines and rallies from Bryce Coward:

“We’ve cataloged all 20 uninterrupted 15% declines in the post-war period and documented what has happened afterward, as well as the type of market environment in which those declines have taken place. By uninterrupted decline, we mean a waterfall decline of at least 15% without an intermediate counter-trend rally of at least 5%. Some bullet points describing the rallies following those declines are below:

So, if history is prologue to the future, Powell could be right about how close the next recession is or in fearing a stock market crash. Reinforcing that, DoubleLine’s CEO, Jeff Gundlach, says the following historical chart is the strongest indication of a recession at present, calling it one of the worst readings ever. You can see that this week’s reading has only plunged this much inside of or right at the start of every recession in the past 45 years:

I don’t know if Powell is worried about imminent recession or lying about not being captive to a stock market that is so close to total collapse it has taken the Fed hostage, but he shot up his hands and surrendered like a man with a gun to his back.