I Know What the Economy Did Last Summer Part 2: The Real Estate Rollover

In fact, I knew what the economy did last summer before summer even began. Since the beginning of the year, I have been writing that it appeared housing was reaching a new bubblicious peak and that the real estate market was getting ready to roll over. Just before the start of the summer, I confirmed that prediction by saying that it looked like that process had begun. I anticipate it will be a slow turnover at first, just as it was in 2007, which did not reach free fall until late in 2008. Likewise, I anticipate the present decline will not reach free fall until 2018.

While housing played out about as I expected this summer (see below), the more obvious collapse right now is developing in metropolitan commercial real estate, particularly in retail space due to the retail apocalypse. Even longtime commercial real-estate mogul Sam Zell warned last week that he would not consider investing any capital in retail real estate. In Zell’s words, the real estate landscape looks “like a falling knife.”

“An area that’s in this much disarray, with so many weak players, is not an area where I would want to deploy capital at this time. And I’m generally a contrarian, and I generally rub my hands together at the opportunity for serious dislodgment, but I think what we’re dealing with here is very significant… It’s going to be very hard to take that shopping center land and redevelop it with all of these competing people having rights.” (Newsmax)

Zell sees retail’s mortal throes as a violent struggle that is going to take a few years to play out.

A second problem the commercial real estate bubble faces (and Zell describes it as a bubble in that there is way too much space dedicated to retail in the US compared to other nations), is that Chinese investors are being forced to exit, and they have been a major support to that space. In Manhattan, for example, Chinese investors have made half of all commercial real estate purchases. The Chinese government decided this summer to squeeze that dry in order to stop the flow of yuan out of the country. In London and Australia, Chinese buyers accounted for about a quarter of commercial real-estate purchases. The Chinese government is pressuring Chinese banks to stay away from these deals.

Morgan Stanley estimates that China overseas direct property investment could plunge by 84% in 2017 and another 15% in 2018. (Business Insider)

After a seven-year boom, commercial real estate prices peaked this year with July showing the first year-over-year decline. Transactional volume also declined 8% in the first half of 2017 with the second quarter turning out to be the third consecutive quarter to see year-on-year declines. Without the Chinese bellows pumping a lot of oxygen into the fire, it looks like the flame is going out.

Exactly as predicted on this blog…

While it was “unexpected” to economists, who couldn’t even see the Great Recession coming, it certainly wasn’t unexpected here. I pointed out during the second quarter that the slump back then looked like the beginning of a rollover in housing that would become more evident in the summer. July added momentum to spring’s decline; at which point, June also also got revised downward. The concurrent decline in building permits indicated the deteriorating condition of the housing market would persist.

Housing is now falling at its steepest pace since 2010. New-home sales fell even harder in July than new-home construction, crashing a whopping 9.4% month on month. That amounted to an 8.9% plunge year on year and established a seven-month low. (Economists had actually expected a 0.3% gain! I can only wonder how they came by their lame prediction.)

Likewise, pending sales dropped in August, backtracking 2.6% (YoY) to their lowest since January of last year to which the chief economist of the National Association of Realtors said the housing market has been drained of all of its past year’s momentum. He attributed this in large part to home prices having risen far above incomes.

The continual decline in sales (number of houses sold) means that housing prices have to start falling again, which so far they have resisted, in order for homes to start to become affordable under rising interest rates. Affordability based on the slight rise in income over the huge rise in prices since the Great Recession is at the lowest it has been since 2008, so buyer pessimism about ever being able to afford a house is rising quickly.

With another bump in interest from the Federal Reserve anticipated by nearly everyone in December, a price decline is now inevitable as there are very few potential buyers left at current prices. Each hike reduces the number of qualified potential buyers unless prices drop or wages rise. Of course, falling prices will also mean homes start to go underwater on their mortgages. Then defaults will start to rise as a result because adjustable rates will go up some, and people who bought to flip will be underwater; everyone will be less able to refinance. The math is the same as in 2007.

The summer plunge, therefore, shouldn’t have surprised any economist, given that rising interest rates are certain to force people out of the market when wages are not rising and prices have risen a lot in many regions. Immigration is also tightening, thereby reducing the number of first-time buyers. One has to wonder how economists missed all of this. How are house-warming parties not going to come to an end when the cheap booze is taken away? Apparently economists learned nothing from the situation that created the Great Recession. Nor did politicians, for we are right buy topamax no prescription back where we were in the fall of 2007.

U.S. consumers slowed their borrowing in August to an annual pace of 4.2 percent — a pullback from a pace of nearly 7 percent over the past three years. (Newsmax)

Of course they did. How could they not? While those figures do not include mortgages, the same forces are at work in both credit markets.

Economists and financial markets monitor the consumer borrowing report for insights about consumer spending, a category that represents about 70 percent of U.S. economic activity.

So, how could a 40% slowdown in the annual expansion of consumer borrowing (compared to the previous three years) not be indicative of an economy that is showing some major cracks, as I had said we’d see emerge this summer?

As noted in other articles, the recent hurricanes are bound to help the housing construction market, as a massive number of new homes will have to be rebuilt and old homes will have to be repaired; but economically, that doesn’t really help the economy overall (as also noted earlier). As with auto sales, the hurricanes shift the hurt from one part of the economy to another as insurance companies, banks, and the national debt all take major hits. (Banks were not fully covered by insurance on these mortgages because not all homes were in areas that required flood insurance to get a loan.)

According to Black Knight Financial Services, of the 1 million or so mortgaged homeowners in the [Hurricane Harvey] disaster area, more than 75,000 will become delinquent within two months, and 45,000 are at risk of becoming seriously delinquent or even face foreclosure inside a four-month period. (Newsmax)

[As assessments of damage continued, Black Knight updated its figures to 300,000 borrowers in the vicinity of Houston (and adding Florida) could become delinquent on their loans and 160,000 could become seriously delinquent, or more than 90 days past due. And the count for Irma is still unfolding.]

If the latest figures prove out, it will amount to, at least, a 25% increase in nationwide foreclosures just from Hurricane Harvey! $700 billion in mortgage balances are at some level of increased risk in those two hurricane areas. That means the reconstruction after Hurricanes Harvey, Irma and Maria (and now unfolding … Nate) will be happening at a time when banks will be less able to make loans or, at least, lest likely, as they are entering a period of intensified strains.

I would also expect some lag between the loss of housing construction that was already underway before Harvey and the pickup in housing that will come in its aftermath. That’s because debris has to be cleared out of the way, infrastructure repaired, materials brought in, permits issued, plans made, qualified labor hired, etc.

All of this is likely to make prices rise even higher because of labor shortages and material shortages. Labor shortages, however, may mean a lot of reconstruction has to wait for a long time. (All good news if you’re a carpenter, plumber, electrician, etc.; but not if you’re not.) The downward effects of the hurricanes are likely to be far greater in the near term than any lift from reconstruction:

“With the pace of housing starts in July and August retreating, and a likely depressed September, we now anticipate that housing starts will fail to expand much, if at all, in the third quarter,” said Kristin Reynolds, a U.S. economist at IHS Markit in Lexington, Massachusetts. (Reuters)

Overall, growth in construction in the US dropped this summer to its lowest level since 2011, matching the growth level it held just before the financial crisis in the fall of 2007 — a common theme in Summer’s data.

And this last week brought another piece of data in common with that theme of reverting back to the mean of Great Recession statistics:

Wall Street was completely clueless ahead of today’s payroll, with most expecting a small positive print but two brave forecasters went so far as to predict that the recent hurricanes would result in a negative print, and sure enough, moments ago the BLS reported that in September, the US economy lost 33,000 hurricane distorted jobs, the first payrolls decline since September 2010. (Zero Hedge)

The hurricanes forced the first decline in jobs since the tail end of the Great Recession. While that’s an anomaly, it’s an anomaly that is starting to sound like a new statistical trend toward reversion. 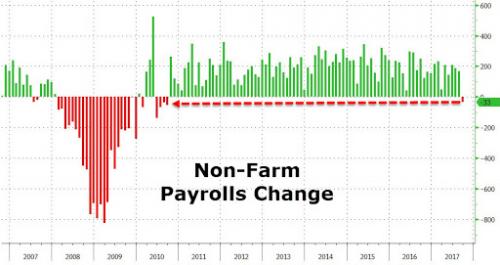 As anticipated, none of this stopped the Federal Reserve from commencing with its great QE unwind this month.

So, three major cracks that I have been predicting all showed up this year on schedule:

(See “I Know What the Economy Did Last Summer Part 1 : Carmageddon and the Retail Apocalypse.”)

I’ll close with a summary of the summer from Jeffrey Snider that isn’t very summery:

We can’t pretend as if the economy was cooking before Mother Nature interfered. It wasn’t. If one thing has become absolutely clear about the economy in 2017, it is that it has fallen off dramatically when compared to the last half of 2016. This is the opposite of what was supposed to happen, what most people and all Economists were expecting. The rebound off the early 2016 trough was only the first part of bigger things, or so it may have seemed. For reasons beyond the mainstream grasp, however, the farther into 2017 we go the farther away that dream seems to get. (TalkMarkets)

In my next article, I’ll review the stock market where I said I anticipate a crash sometime between the start of summer and January of 2018. While a stock-market crash has not yet begun, I allotted myself a broader window for that one, noting that central banks could easily hold the market up well beyond the start of summer now that stocks are entirely rigged by central banks … even to the point of CB’s directly purchasing certain companies that are most notably driving the market up.