Recession Started Right on Time — Before Most Were Even Aware, So Beware! 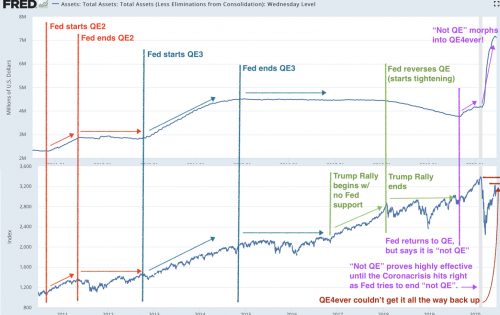 Before we get into the timing of the recession, here is a graph that is particularly telling of the Fed’s journey and is worth studying from left to right. Notice how chaotic and less effective our journey with FedMed has become, just as I wrote about in another article this week (“Zero Hedge Confirms Fed is Dead“).

I want you to particularly note how the effectiveness of FedMed petered out after the recession took down the stock market. (The top line is total Fed assets; the bottom is the S&P 500.) The market is refusing to attain its previous climax because the now impotent Fed just can’t get it up again. (Just sayin’. That description fits it best.)

There is an alternative way to view the tail-end of the Fed’s demise, but I’m not sure it looks any better for the Fed. Here’s a close-up of that end time on the graph:

There is a second problem here: clearly the market won’t go up any further without more Fed support. It immediately goes down as the Fed goes down. The question to ask is, “Can the Fed keep giving more support when it has already had to create outrageous new bailout programs as part of it is current support?”

In other words, how much more outrageous will the Fed have to become; and how much more chaotic, therefore, will the market become if the Fed tries to keep making that climb with QE4ever, which it will have to do to keep the market from falling if the economy goes back down? It certainly shows it has to be QE4ever to keep the market rising. if the Fed just takes a breath, down it starts to go, even as the economy was reopening.

The market’s dependence on the Fed is now absolutely tight. With the Fed softening support, all it took was a shot of COVID news to cause the notable dive in this graph. There is a lot more Coronacrisis news to come. The current resurgence in case numbers will likely grow.

More importantly, I am predicting you will certainly see many disastrous economic knock-on effects later this summer from the global economic shutdown that already happened, and the social unrest I predicted as part of this Epocalypse is going to keep growing worse every day as we move into the full US election season. All of that will add new economic damage that will take the stock market down again this summer and likely worse in the fall. The Epocalypse, as I call it, is a massive global meltdown that is going to get worse over the summer and especially into the fall.

I also guarantee you the Fed starts pushing its balance sheet up again this summer but with less effect and more chaos.

To help you weigh these predictions, let me tell you with official proof now how such predictions here have gone historically in case you’re new:

This recession began on my schedule before the Coronacrisis

The stock market crashed right after we went into recession, proving my 2019 prediction for the market correct, which was that the market would not likely crash again until recession hit; but that the recession, when it was fully recognized in the early part of 2020, would certainly take the stock market down with it.

I also claimed in January of 2019 that the next US recession would begin in 2019 but not be recognized officially until 2020. That, too, has now been proven correct.

Of course, the recession turned out to be a lot steeper because of the Coronacrisis than it would have been without it. As a result, some will argue that we would never have had a recession officially declared at the start of 2020, had the coronavirus not hit. That will appear true only until you look into the details of the official declaration of this recession as quoted below.

While the Coronacrisis shoved the whole world down more steeply than our trip into recession would have gone without it, the US recession has actually officially been declared to have begun before the Coronacrisis hit the US with evidence that the economy actually peaked in the final quarter of 2019:

Cambridge, June 8, 2020 – The Business Cycle Dating Committee of the National Bureau of Economic Research maintains a chronology of the peaks and troughs of U.S. business cycles. The committee has determined that a peak in monthly economic activity occurred in the U.S. economy in February 2020. The peak marks the end of the expansion that began in June 2009 and the beginning of a recession. The expansion lasted 128 months, the longest in the history of U.S. business cycles dating back to 1854. The previous record was held by the business expansion that lasted for 120 months from March 1991 to March 2001.

The committee also determined that a peak in quarterly economic activity occurred in 2019Q4. Note that the monthly peak (February 2020) occurred in a different quarter (2020Q1) than the quarterly peak. The committee determined these peak dates in accord with its long-standing policy of identifying the months and quarters of peak activity separately, without requiring that the monthly peak lie in the same quarter as the quarterly peak. Further comments on the difference between the quarterly and monthly dates are provided below….

The committee believes that the two most reliable comprehensive estimates of aggregate production are the quarterly estimates of real Gross Domestic Product (GDP) and of real Gross Domestic Income (GDI), both produced by the Bureau of Economic Analysis (BEA). These measures estimate production that occurred over an entire quarter and are not available monthly…. In dating the quarterly peak, the committee relies on real GDP and real GDI as published by the BEA, and on quarterly averages of key monthly indicators. Quarterly real GDP and real GDI peaked in 2019Q4…. The committee concluded that like GDP and GDI, the number of people working also reached its quarterly peak in 2019Q4.

So, when the recession began, depends on whether you look at the data monthly or quarterly. Officially, it was declared to have begun in 2020, when I said it would be declared, right as the Coronacrisis took the stock market down. However, data looking back indicates the economy climaxed 2019, which is when I said recession would actually begin, and I noted every time I said it that no one would believe it had begun until 2020 (except maybe a few devoted followers of mine).

To be precise, I said it would begin in the summer of 2019 due in part to continued Fed tightening and that it would likely start with a huge repo crisis that would also be due to continued Fed tightening. Every time I said that, I qualified that prediction by saying the recession would not be recognized by most people and certainly not officially until early 2020, when I said it would be noted retroactively to have begun in 2019.

In the summer of 2019, we entered a manufacturing recession, recognized by nearly everyone writing on economics, even at the time. In the summer of 2019, we also began the worst repo crisis on record, fully recognized by everyone everywhere. The services sector, however, did not start into recession until the fourth quarter of 2019. Services being by far the larger part of the US economy, the full economy did not peak on a quarterly basis until, as noted above by the NBER, the fourth quarter of 2019.

The whole thing went almost exactly as I said it all would, including how people would not recognize it and not believe I was right about the recession until 2020. The move into recession was masked because services did not join the decline until the final quarter of 2019. (So, the decline into recession started in summer but didn’t become complete until fall.)

We’d have to wait until 2020, I said repeatedly, to know if I was right because the slide into recession would be subtle enough, at first, that we would only know for sure by looking back. And, so, it turned out.

I know, I’m a little smug about this, but when you take the slings and arrows of people bombarding you in comments on several sites throughout the second half of 2019 with statements that you are obviously stupid and were clearly wrong and don’t know anything (even though they are doing exactly what you said they would do by saying that), you earn the right when it’s all finally officially determined to clear your throat and say a loud “Ahem!”