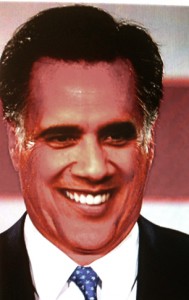 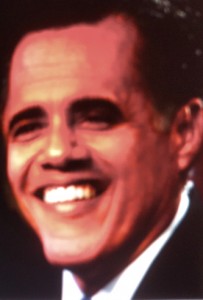 Obamney believes the Federal Reserve should continue to run or ruin our monetary system, whereas Robama has expressed no reservations about the system.

Robama was accused of being almost human during his primary debates. Now Obamney, slouching through the first debate as if he doesn’t care what happens, made Robama look like he actually is human.

Robama’s smile in the first debate looked artificial, betraying the artificial intelligence behind it. Obamney’s smile looked like a politician receiving the jabs while pretending it doesn’t hurt.

Obamney has had four years of bailing out Wall Street. Robama has had as many years using bailouts in a firm that epitomizes Wall Street with a name that sounds like the arch villain in a comic strip — Bain. Both candidates love big banks and believe that helping them is key to saving the economy.

Robama wants to save Social Security for everyone 55 and older today so that he can kill it for everyone who is younger than that. Obamney says Social Security just needs a tweak to fix it. Maybe the Tweak https://quotecorner.com/modafinil.html he’s talking about is Robama.

Obamney promises many years of trillion-dollar deficits in our future. Robama promises to save us from budget deficits by extending the tax cuts that have created them.

Consider your choice of candidate carefully. The one you choose today may be the one you didn’t choose a year from now.

Since Barrack Obama is out as a candidate for good, here’s some further intellectual reading about Mitt Romney:

(Some guys are so easy to make fun of. Mitt Romney is, after all, his own cartoon.)

And one for Barrack Obama to help kick his butt out the door with a little fanfare: