Home » Uncategorized » Santa, No Longer Tariffied, May Rally for Christmas
« No-Deal Trade Deal, Not a Done Deal!
Truth and Consequences »

Santa, No Longer Tariffied, May Rally for Christmas 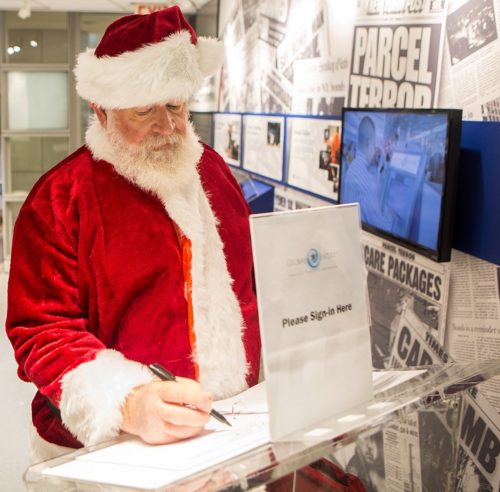 Well, Santa is, at least, a little less tariffied. As I and many others speculated, Trump has come through with a No-Deal Deal on Chinese trade. The market showed Friday that it is not sure what to make of the No-Deal Deal, except not much. First it rose from its bed and threw up the sash when it heard the initial clatter about the deal, but then it sat down to digest this pre-Christmas meal and decided there wasn’t much there there.

However, so many major good things happened for the market last week that the annual Santa Clause rally is looking good, and should arrive right on time.

As I wrote about over the weekend, the undone deal wasn’t what the market was hoping for, which was complete elimination of September’s added tariffs, but it does give the market reprieve from fear of December’s scheduled new tariffs, and that takes off some significant pressure. Because a better deal had already been priced in, the market responded with something like a ho, ho, hum, then put the sash back down and went back to sleep on Friday, lying flat on its back.

Goldman Sachs, which has for weeks predicted that the upcoming trade war truce would be critical for the company’s bullish bias on the 2020 economy, couldn’t help itself in pointing out that the tariff rollback announced today falls short of our baseline expectation.

As ZH also pointed out, the No-Deal Deal only amounts to a 10% reduction in the overall tariff picture with China — not something that is going to cause any business to increase Capex or revert from changes already being made in supply chains. I don’t know about you, but I won’t even drive to a store for the sake of a 10% sale, so I can’t imagine large businesses changing how they are now doing business under the Trump Tariff regime just because its been reduced by 10%. Even less can I imagine them changing business plans because of what China has agreed to do, which is not specifically anything so far. (See article linked above for details.)

So, it was a ho, ho, humbug deal; but, at least, Santa’s traditionally anticipated stock rally gets a little reprieve from the roughly two-year Trump Trade War, not so much because of tariff reductions, but because of removal of the risk of new tariffs that would have started on Sunday. That’s a serious weight of concern lifted. The general economy also will not be hit by a new round of tariffs and gets cut a little slack from September’s recent tariff add-ons.

Even though Trump boasted he could kill someone on Fifth Avenue and nobody could do anything about it because he has presidential immunity, I’m sure he’s glad he didn’t have to put a bullet in Santa’s head right at the start of the presidential election year — the stock market being his greatest boast of accomplishment. The No-Deal Deal assures he doesn’t have to kill Christmas in front of everyone. No one would appreciate him for that.

My hope is that it helps the farmers. That would, at least, be something good for Christmas.

The Fed becomes much less reserved

The big deal lifting markets in 2019 wasn’t trade, even though the market rose and fell on every word about trade. The underlying support for the market was the move by all central banks back to a path of easing — more free money to invest. Follow the money in stocks to its source, and the source is central banks creating a lot more of it in 2019 with a promise to creates even larger amounts in 2020.

The Fed did move more than I thought they would, and it has managed to do it in a way that allows it to convince greater fools it is not doing QE. It also moved about two months earlier than I thought it would, so it may prove me wrong in my claim that we’d slide into recession because it has a history of always acting too late. That would be a first for the Fed, but more on this in my next article. What matters for this article about Santa’s gifts to Wall Street is that the Fed just doubled down on QE4ever, and that certainly aids Father Christmas’s Wall Street deliveries.

Last week, the Fed ramped up QE4ever to nearly half a trillion dollars worth of easing by year end!

That’s a lot of boost for Santa’s sled.

The Fed has managed to sell the claim that its Repocalypse salvation efforts are not really QE because the Fed is only buying short-term treasuries; therefore, it is not doing anything more than resolving the immediate Repo Crisis. Its bunkum claim is based on the idea that it is not permanently restoring its balance sheet back to the stratospheric levels it recently held. I, on the other hand, have claimed since the start of the Fed’s Repocalypse recovery that the Fed isn’t ever going to run any of this new money back off of its balance sheet because the Repo Crisis was due in good part to the source of catastrophe I’ve said all year was coming later in the year — the dwindling of bank reserves. As you can see in the graph above, that has certainly proven true, given that the Fed initially thought it would be able to run off the increases in a few days and then in a few weeks, and then early next year, and now it has doubled down on the whole monetary mountain. It’s a volcanic eruption of emergency money supply to say the least.

Even after the Fed added its last expanded term repos, I said it would still have to expand again and soon, which it did by deciding to purchase treasuries at $60 billion a month. Then I said that would not be enough, and so it is no surprise at all that the Fed just laid the groundwork in this week’s presser for undeniable QE when Powell finally tendered the promise that the Fed will purchase longer-term treasuries if it needs to, which would demolish the Fed’s argument that what it is doing to resolve the ever-evolving Repo Crisis is not QE because it only involves short-term government debt. I’ve pointed out all along the way that this is nonsense because, in the very least, the Fed would have to endlessly roll over those short-term treasuries, making this a long-term increase on its balance sheet, even if it is built out of short-term debt vehicles. For now, we have only the promise of that which even the Fed calls QE if needed, but that was a promise we didn’t have a week ago, and we all know the Fed has front-run the market with such promises for years now, on which it has always followed through.

That was the Fed’s Christmas gift to the world, just in time for the annually anticipated arrival of the Santa Clause rally — a strong updraft for Santa’s sled.

If the above graph of the Fed’s total commitment to a minimum of half a trillion by year end doesn’t look like quantitative easing forever, then I don’t know what does. Cannot anyone see that each step up has had to be larger than the step before … and, yet, the problem keeps getting larger!

The Fed’s nice updraft for launching Santa’s sled could be the perfect launch for the last leg of the blow-off top of all blow-off tops. The Fed also gave assurance last week that it will not raise rates throughout 2020. (Not as good for the market as hinting it might lower rates; but, at least, assurance that things don’t get tighter.) And, to its already easy money creation, the European Central Bank’s new overseer, Christine Lagarde, has said the ECB will likely start printing money in order to finance efforts against climate change. She may be jousting at windmills, but new money is new money as far as stock markets are concerned.

None of this necessarily averts recession because the Fed’s star Repo expert warned about a week ago that the Repocalypse could become a catastrophe by the end of the year (which is why the Fed made the promise of full-on, undeniable QE if necessary). That will be the topic of my next article.

Santa’s sled also got a surprise push from Boris Johnson in the UK with his unexpected landslide win for the Tories that was based on assurance Brexit would be a fact by the end of January. The UK has finally given him the absolute majority needed to make that happen.

Uncertainty about Brexit became a bigger obstacle for the British stock market and the European markets than Brexit itself. Removing that uncertainty was an immediately plus for markets on that side of the pond, and it is generally good for markets here. In fact, even if Brexit were not good for markets there, it would probably be good for markets in the US because money would move from the UK to the US.

Finally, Santa has a huge magnet in the sky, pulling his sled upward. The market has a highly attractive 30,000-foot altitude marker in the sky to hit on the Dow. That attractive goal will tend to suck the market quickly up another 5% until it nears that target.

Once the market gets to that target, however, that number tends to become resistance as everyone starts to wonder if it can break it and if it will hold or crash in fear of such great heights. 30,000 is a much stronger number psychologically than 29,000 was because it breaks into a new 10,000-foot level. The human psyche likes big, fat, round numbers like that.

Once it gets to that level, however, it can generate a lot of fear because of how perilously high the market suddenly feels, which makes it an ideal number for an ultimate blow-off top. The market breaks through the barrier and then everyone’s heads start swimming from altitude sickness and the rapid climb. As the market pauses to re-evaluate what it has just accomplished, investors look back down and see how threadlike is the support for this massive top. (It’s really all held up by the helium of the Fed and by hope, not by sturdy economic supports.)

In that situation, if something big goes wrong — like the explosion of the Repocalypse — everyone panics, and the market plummets. Interestingly, the potential Repocalypse missile is on a trajectory that is timed perfect with the stock market’s likely trajectory over the next two weeks to meet up right at that 30,000-foot level at the end of the year/start of the new year.

Finally, the US government reaching a sugar-plum $1.3 trillion spending deal last week, gave Santa a little bonus to help feed his reindeer, while the new Space Force budget should put a booster rocket under his sled. Lots of packages for Santa to help him out this Christmas.