Home » Economic Predictions » Stock Market Crash 2015 – The Scene is Set for Panic
« Economic Collapse — The Train Wreck that is Happening Now!
What is Margin Buying in Stocks or a Margin Account? »

Stock Market Crash 2015 – The Scene is Set for Panic 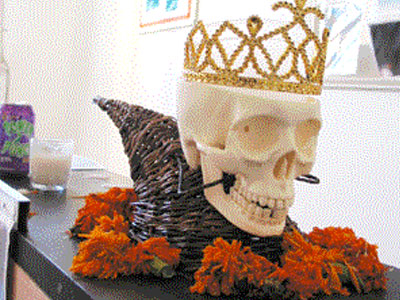 Ironically, the rise in the stock market we have seen in the last few days is likely to cause a much steeper and longer stock market crash in 2015 than the one we just went through. To understand the psychology that is set up to rapidly play out now, think of a horror movie. Think of how the director sets you up with a little sound that makes you think something really bad is about to happen and then it turns out to be only a little toy making the innocent sound. You settle back into your theater seat. (I’ll come back to this in a moment to show how this plays out.)

The foreshadowing of Stock Market Crash 2015

Only a few days ago, the stock market plunged for a day upon hearing that the Federal Reserve would continue its stimulus. That was the market’s first fall on that kind of news in years. As I mentioned in my last article (https://thegreatrecession.info/blog/global-economic-collapse-2/), that marked a sea change. For the first time since Fed stimulus began, the continuation of stimulus was seen as a bad thing, which took the market down quickly.

You see, after so many months of predicting a rate increase (building suspense with a lot of ominous music), the Fed’s postponement finally caused people to fear that the Fed cannot raise rates without killing the economy. That sent a shock through the market as it opened people’s eyes to realize that the Fed does not believe the US economy is immune to what is happening overseas and that it does not believe the recovery is strong enough to survive what is happening around it without stimulus (because all the Fed’s normal reasons for ending stimulus were in place, but it couldn’t end it).

But, then … nothing bad happened. The market fell, but righted itself. It all turned out to be just a little noise. So it would seem. It was just a toy.

I’ve been saying that, by this fall, the Fed’s stimulus would go from producing less and less of a benefit (the fundamental economic law of diminishing returns) to actually producing a negative impact on the economy. That’s because the Fed’s stimulus is long in the tooth to where each continuance now will make it all the more obvious that a sustainable recovery is eluding the Fed and the country.

But why do I say the present rise in the stock market is exactly what is likely to cause Stock Market Crash 2015?

The sharp-but-brief drop that happened recently caused even the likes of CNBC’s Jim Cramer to tremble (as I noted in the article linked to above) so that he fell off the bull-market bandwagon and finally saw that we’re entering a bear market. In fact, it cause many of the market’s permabulls to start actually writing that the bull market was over. That was the sea change.

Then, just as suddenly, the market started to rise, and the permabulls are already breathing a huge sigh of relief and writing, “Whew! We didn’t go over the cliff, and we’re headed back to a bull market after all.” As could be expected, Cramer suddenly wanted to jump back on the bull-market wagon, too, saying he was rethinking his recent bearishness. Some analysts are already writing that this week’s upward move means the worst if is finally behind us because we didn’t go lower than the last bottom. So, presumably, that means we’ve found the bottom. Thus, all the  permabulls are wiping their brows and settling back in their theater seats again. “Whew! The noise was just a toy.”

In a well-setup horror movie, that is exactly when the next bad news suddenly breaks the calm. A good craftsman of horror knows that, just when the audience thinks they are in the clear, that is the moment when surprise will cause the most shock and panic. Horror goes beyond terror. It is the realization that the bottom is falling out. That realization hits immediately as one says, “Oh my God, it’s all giving away again.” Suddenly that deep dread that the bottom really won’t hold strips away all of everyone’s false security. Even the brief relief they felt only heightens the sense of falling by giving an upward jog before the fall. It leaves them with the sense there is nothing they can hang on to. Likewise with market panics. It is that moment when people suddenly feel that the bottom is not holding that they realize in a flash there really is no salvation for the market. THAT is what makes something that might have been a mere downturn, a panic.

When you are watching a scary movie and just settling down because the scare didn’t materialize — it was just a toy — and suddenly death stares you in the face, that is when you scream! That’s why the present stock market rise is a set-up for a much, much sharper panic in the very, very near future. (I don’t mean a conspiratorial setup, just that’s how it will likely function.) It is exactly the kind of momentary relaxation that can set people up for a bigger shock.

“But,” you may say, “this is a market, not a movie. You’re talking psychology, and it is facts that drive a market.” No, it is never facts that drive a panic in the market. It is a fact that triggers a panic, but it is psychology and timing that causes the sudden stampede for the theater doors. If the psychological framework were not perfectly set, the same economic fact would not trigger a run on banks or bonds or a stock market crash. It is when the right psychological moment times out with the right bad fact that we get those rare all-out crashes.

Here’s a graph from Zero Hedge of the crash in October of 1929. 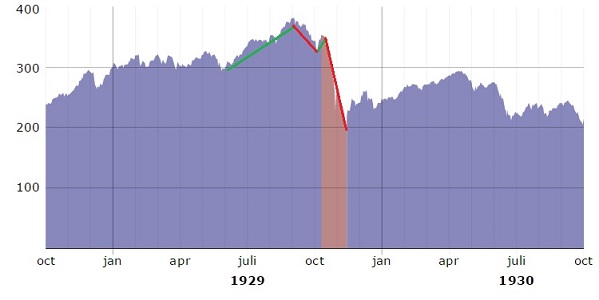 Now compare the green and red-lined portions to the stock market today:

In ’29, there was a foreshock drop months ahead of the crash (from which point the green line begins) like the one we saw last October of 2014. In ’29 that was followed by a period of rising, as we saw after October 2014. That was followed by a rounded top, as we saw in the begging months of 2015. The rounded top was followed by a steep drop, as we have just experienced. Then came a large bounce back up that made it look like the fall had ended — as we have also just experienced. THEN, after that brief sense that balance had been recovered, came the steep, steep crash over the cliff — the stock market crash of 1929. That is followed in the first graph by the Great Depression — that long, long low that continued sideways after the drop over the cliff.

So, the entire setup is in place. What we don’t know is if the cliff and depression are what follows … or if things will go back to rising now as the permabulls believe. However, something there is in October that loves a scare and loves a good stock market crash. Most of our worst stock market crashes have come in October. Maybe it is just that it is Halloween month so that people are primed for panic.

Even if that is all there is to why the worst market crashes usually happen in October, we still are primely set up. If there is something more sinister to October’s than that, then there is all the more reason to think a crash is set up to happen. Either way, the recent rise creates that illusion that all is well, so we can sigh relief. It is exactly as we sigh, that the breath gets sucked out of us. If something bad happens in the market at that moment, that’s when people panic and run for the exits.

The fact that the moment is perfectly set up for a big scare, of course doesn’t mean there will be a bad event that is significant enough to seize the moment. However, my continuing thesis has been that there are so many bad things poised to happen this fall that the odds are strongly in favor of a panic.

The underlying reality for a stock market crash in 2015

The bull market is over. We can see that the Fed’s game is beginning to turn on them now that the permabulls (see my previous article) are turning against the bull market when the Fed promises stimulus. The market has that ashen macabre look now. Death is already its underlying reality, but it doesn’t know that it is dead yet. The big scare comes if it looks in the mirror and suddenly realizes it has already died.

The market has clearly bounced off a ceiling for an entire year now. It wants to go down. The only question that remains is whether the market will go over the cliff in a mad run for the doors because it suddenly sees itself in the mirror or whether the bear market will play out in a long series of drops and bounces that works its way to finding out that it is dead. That bottom is a long, long ways down because the stimulus has lofted things a long, long ways up.

The reason I’ve bet my blog that the name of this movie is Stock Market Crash 2015 with great assurance is that the shear preponderance of bad things piling up against this economy causes me to believe some very big, bad news is quite likely this month, just as we are perfectly primed for a stock market crash.

My assuredness comes from more than the likelihood of bad things happening with perfect timing. The change of mood is happening because that line graphing diminishing returns for Fed stimulus turns negative for the first time. That means we are now in totally new territory, and the Fed doesn’t know it. It is damned if it does raise interest but now also damned if it doesn’t. We know that because we just saw it happen for the first time when the Fed’s assurance that it would continue easing caused the opposite reaction to what the Fed and all the rest of us have come to expect after all the preceding years of Fed stimulus.

This market wants to go down as people are now transitioning back to a state where bad economic news is simply bad news and where good news about Fed stimulus is also bad news. When it goes, it couldn’t happen to a nicer (or more rickety) market.

When the stock market crashes, it may get a last bounce up by a sudden application of negative interest rates to trump zero interest rates or QE4 from the Fed, but that will be a bounce straight into oblivion (with very little time, if any, back in the upward trajectory) because it will solidify proof that there is no recovery and never has been a recovery at all. It will instantly prove that QE has has lost its power and that the market is totally dependent upon it. That’s a true horror moment when the bottom falls way, way out.

Reading on the stock market crash of 1929: