Some would, I suppose say, “Sorry, but that’s not close enough.” I think most, however, would find that interesting enough to give me a little latitude and say, “I understand the objection, but I’m going to hear more.”

While you don’t know me, I’m the kind of guy who cannot stand these prophecy preachers who keep moving their date for the end of the world forward. Anyone remember Harold Camping, who moved his date forward each time he was wrong until he finally gave up in disgrace? I think, if someone is a man of truth and he misses his date, he should quit prophesying. I’d respect him more if he said, “I meant well, but I was wrong, and I won’t do it again.”

If you think I shouldn’t be writing my blog since the stock market didn’t completely crash in October, I ask you to look back at my last two articles. I promised in January to stop writing (and I did stop) unless the October surprise plunge turned out to be the beginning of the end for the long bull run this stock market has seen. In my last articles I came back after a hiatus to point out how the market does, indeed, graph out from that fall plunge to look like the rounded top that happens before a major crash and how one of the main reasons I said it would crash was the Federal Reserve’s claim that it would end quantitative easing, which the Fed said it did, but it turns out it didn’t. We are now in Stealth Easing mode, as I showed with the Fed’s own graphs.

To be sure, the bull run hasn’t conclusively ended yet, but I am sure it is in the process, and I wanted to step back in for a bit to point out a few things to be aware of.

Signs that the end is near … for the stock market, not the world

Today, one of the biggest signs of an imminent stock market crash hit the news, and I’m going to tell you about that toward the end of this article because there are several smaller indications that also happened today that I want to cover first.

The year started with the market bulls continuing to rampage uphill, bellowing that the U.S. stock market would be choppy but a good upward climb this year. I wonder how they will react when the New York Stock Exchange reopens on Monday to today’s news? The NYSE was closed today for Good Friday, but forty-five minutes of trading in stock futures, showed the price of stock futures falling.

At least the euphoric bulls will have a long weekend to digest this Easter uprising of shockingly bad news before they respond. I have to wonder, though, how much longer it will be until they realize that the October surprise when the market briefly plunged was there alarm to say this bull run is finished.

Employers in March added the fewest workers since December 2013 … as companies sought to bring U.S. headcounts in line with an economy that throttled back at the start of the year. The 126,000 increase was weaker than the most pessimistic forecast in a Bloomberg survey and followed a 264,000 gain a month earlier that was smaller than initially reported, the Labor Department in Washington said.  (NewsMax)

Even though the plunge in the labor market was far worse than the most pessimistic estimates, the rose-colored glasses prevail:

“There’s really no way to sugar coat this: This is a soft print all the way around, no matter how you slice it,” said Omair Sharif, rates sales strategist at Newedge USA LLC in New York. “Hiring just took a breather in the month of March. I wouldn’t read this as anything other than that. We should get back on track in the second quarter.” (NewsMax)

Thus, ended the longest streak of new jobs staying above 200,000 since 1994. It could, of course, be a hiccup from the bad weather. That’s not unreasonable, and the market bulls may cling to that explanation as they seek to continue their run on Monday. But they have been getting more nervous of late with a few of them starting to think I might be right after all. (Well, they’ve never heard of me, but their starting to thing in the same direction.)
This market bull quoted above sees the darkness closing around him, and yet he still speaks of a lovely path ahead. I would say, on the other hand, that hiring did not just take a “breather” in March. Hiring hit the lowest level it has hit in over a year! Hiring FELL FLAT ON ITS FACE!
People on Main Street, however, are seeing things a little more clearly than those one Wall Street. They are seeing in the sense of, at least, being able to acknowledge what they are not seeing:

“I can’t see the recovery,” said Weir, who has a master’s degree in business administration, $60,000 in student loans and a 17-year-old son with special needs. “We were told: ‘You need to get your education.’ I did that. I sacrificed. And now I’m just begging the world: ‘Just give me a job.’” (NewsMax)

Here are two other indicators of where the economy may be headed:

The March employment report follows a spate of data showing the economy has been cooling. Consumer spending barely rose in February after declining a month earlier…. Manufacturing expanded in March at the slowest pace in almost two years, restrained by a stronger dollar, weaker foreign demand….  (NewsMax)

The Atlanta Federal Reserve’s GDPNow model forecasts economic growth of only 0.1 percent, as of Thursday. And that’s an improvement from Wednesday when the projection was zero growth. (NewsMax)

The drop in consumer spending could easily be attributed to the harsh winter in the Northeast, but what about the fact that the entire west coast had a lighter-than average winter and a very early spring? Manufacturing cannot be attributed to the winter because manufacturers set their sites further ahead than whether its raining outside today.
The strong dollar is weakening foreign demand. Our great economists told us months ago that wouldn’t hurt the U.S. economy much because U.S. manufacturers have such a strong customer base right here at home, but guess again. It is hurting. On top of that low oil prices are causing layoffs in the primary industrial sector that was responsible for most of the new jobs that kept that number above 200,000. Now that has reversed.
The Wall Street Journal notes,

“It is like every time when the Fed tries to raise interest rates, there is a disappointing release that tells them to be patient,” Mark MacQueen, a portfolio manager at Sage Advisory Services, told the Wall Street Journal.

And that, my friend, is exactly why the U.S. stock market could go up next week even though the news regarding “economic recovery” was entirely bad. For some time, the market has been standing on its head where bad news was good news. The market now rises when news is bad because of its addiction to Fed stimulus. Bad news means the Fed will be pressured not to raise interest rates.
The stock market has throughout the Great Recession been completely disconnected from economic sense because it follows what the Federal Reserve will do and not what the economy is doing. Yet, there is a sense behind the market’ rise in these situations. That sense is the sense of a good gambler — the likely bet (in these bizarre casino called the New York Stock Exchange) that most other players will be so convinced that the Fed is going to keep up its stimulus that they bid the market up. It is purely a game now of speculators speculating about what the other speculators will do. They’ve gotten to know each other well enough to know they all rise when the Fed walks in to announce it won’t raise interest rates.
This kind of undying, unyielding optimism in bull markets leads to the biggest and worst of crashes when something finally drives reality home. Whether the bulls recognize there is no recovery when they come back from their Easter dinners or not, this is the kind of blind charge that gets the bulls so high they each fall to their death.

Robert Shiller’s cyclically adjusted price-earnings (CAPE) ratio for the S&P 500 … has soared to 27.2, a level topped only by the pre-crash periods of 1929, 2000 and 2007. Yet the stock market continues its six-year rally unbowed, with the S&P 500 standing less than 3 percent from its record high. So what does Nobel laureate economist Shiller make of it all? “This stock market is an enigma…. When CAPE is this high … inevitably there is a major correction.” The S&P 500 hasn’t endured a 10 percent correction since October 2011, although it almost reached that magnitude last September-October. (NewsMax)

Yes, the U.S. stock market’s plunge in September-October nearly reached the level of being a major correction and nearly reached becoming the stock market crash I had predicted. It was rescued from oblivion by the Fed starting its current stealth QE program. The market nearly crashed at just the thought of quantitative easing ending, but the Fed immediately propped it up with QE Lite.
While the CAPE has gone higher than this in the past, it has NEVER gone this high without correcting via an all-out, major crash. Never. P-E ratios this high have always ended in a major crash! 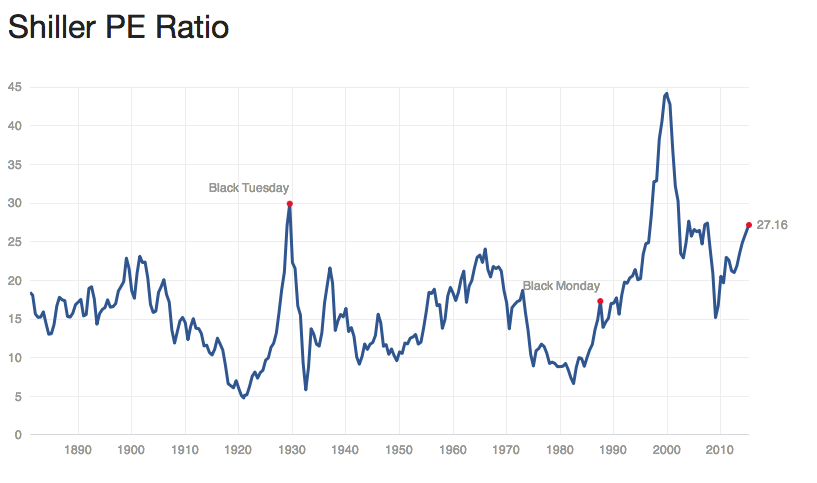 Notice that the graph shows the cyclically adjusted price-earnings ratio on stocks has only twice in history gone above its present point. Each time it reached this point, it did not take long to reach its peak, and each time it ended by falling off a cliff. It did not just level out or taper downward or even have a 10% correction. Every time the market has reached today’s level, its rise ended by going over a cliff!
The only two times the U.S. stock market exceeded today’s level were at the start of the crash of the Great Depression (1929) and at the peak that became the dot-com crash (1999/2000) when many people lost all or most of their retirement funds. The only other time it equalled this level without exceeding it was at the market’s peak right before the housing market crash (2008-2009) that created the Great Recession.
So, here we are, reaching that rarified atmosphere once again. If history is any predictor of the future, U.S. stock market prices won’t go up higher for much longer and will end in a huge crash. Today is the day it reached the point of no return, beyond which it has never gone without crashing.
Remember, there is one truism about all stock market crashes: The majority of market bulls never see it coming! If they did, the market wouldn’t crash. It is only when they see economic reality too late that they all panic and run for the exits together, stomping everything into disaster.
It now looks more certain than ever that the rough ride that started in late September-early-October marked the start of a market top that is now routed for a cliff. The one indicator that has never been wrong now points toward imminent market collapse.

Some Help in Preparing for Stock Market Crash 2015