Home » Uncategorized » They say, “Peace, Peace” When There is No Peace.
« In a World Filled with More Liars than Ever, Donald J. Trumps Them All!
Stocks Got Trumped then Dumped then Rose Again Like Phoenix Rose for the Dems out of Republican Ashes »

They say, “Peace, Peace” When There is No Peace. 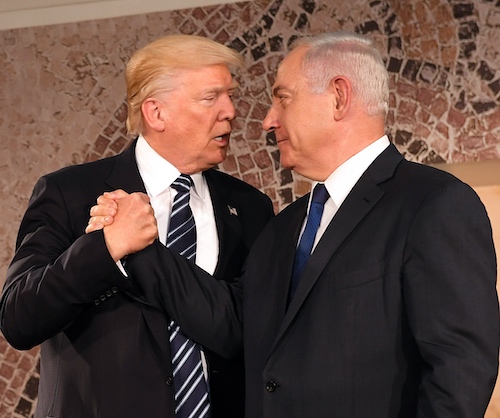 12 Their houses will be turned over to others,
together with their fields and their wives,
when I stretch out my hand
against those who live in the land,”
declares the Lord.
13 “From the least to the greatest,
all are greedy for gain;
prophets and priests alike,
all practice deceit.
14 They dress the wound of my people
as though it were not serious.
‘Peace, peace,’ they say,
when there is no peace.

I find the Fundamentalist Christian embrace of Trump as a great president for Israel puzzling. I get that Trump fulfilled his promise of moving the American embassy in Israel to Jerusalem — something many presidents said they would do but never did. Fundamentalists love him for it.

For years many people worried that moving the US embassy to Jerusalem would cause a third intifada that would set the world on fire. It did not. Trump said moving the embassy might end years of stagnation by changing the chemistry since no past effort had succeeded. Maybe it will, but that looks highly unlikely.

For years, people thought moving the embassy would shred all hope of building peace with Arab neighbors. It clearly did not. More Arab nations have formally accepted Israel’s right to exist as a Jewish state than seen under any other US president I can think of.

I get all of that.

Dividing the Land of Israel

Fundamentalists have taught for years that the leader who brings peace to Israel by dividing the land of Israel will be none other than the Antichrist! No one’s plan for Israel divides the land into a more ridiculous mess of spaghetti-noodle plop than Trump’s plan as intricately crafted by his own Jewish son-in-law, Jared Kushner, whose office is, ironically, located at 666 Fifth Avenue.

Trump is the first president to actually lay out a prescribed map that divides up Israel for peace. Israeli PM Benjamin Netanyahu has managed to avoid dismissing the plan by leaving it to the Palestinians to throw it out so he can remain amicable toward Trump for all Trump has done. The Palestinians inevitable rejection of this plan makes it safe for Netanyahu to appear as though he might go along with it. It was clear from the get-go that the plan is a non-starter in the Palestinian’s viewpoint.

Trump has also managed to get Arab nations to sign peace treaties with Israel based, in part, on this plan. What puzzles me is that, there again, Fundamentalist Christians have long taught that the Antichrist will get Israel to sign a peace deal with its neighbors that will never hold and that will bring great destruction against Israel and even God’s judgment. Have they changed their view?

The present peace treaty, struck during these apocalyptic feeling times, even has a name — The Abraham Accords — that relates back to the covenant that Fundamentalists teach was a perpetual, unconditional gift from God to the Jews of an unbroken expanse of land stretching from the Mediterranean to the Euphrates.

What puzzles me is how many Fundamentalists plan to re-elect the leader who is dividing the land into further fragments as he makes this peace treaty with Israel’s neighbors.

Whenever Presidents Clinton, Bush or Obama tried to get Israel to come up with a division plan of Israel’s own making in exchange for peace with its neighbors, those presidents were roundly condemned by many Fundamentalists for “dividing the land of the Jews.” Yet, Trump actually creates a map for such division, and a named treaty to go along with it, and he is lauded by Fundamentalist. Not by all, as they are not monolithic, but certainly by many.

Trump, on the other hand, has gotten Netanyahu to agree to stop settlements based on this kaleidoscopic map of innumerable interconnected fragments and the peace treaty he is getting signed along with it, and Fundamentalists laud him as “a great friend of Israel.”

Of course, not all Fundamentalists voted for Trump in 2016, and probably fewer of them will this year. Yet, many do plan to vote this president into a second term of office. Just a sign of the crazy times we are living in, I guess. Perhaps they are just eager for Armageddon. I don’t know.

Update: Just came across this excellent article that goes much more thoroughly and politically into this odd twisting of modern eschatology and politics:

“Trump has changed the way evangelical Christians think about the apocalypse“

Update 12/16/20: “Morocco is on the cusp of agreeing to details and terms of its normalization deal with Israel, similar to the Abraham Accords signed between the UAE, Bahrain and Israel in September…. For the first time, a top Israeli delegation will fly direct to Morocco next week, starting Tuesday December 22. White House senior adviser and Trump’s son-in-law Jared Kushner will lead the American delegation there at the same time.” (ZH)

But is such a deal going to bring peace?

Moroccan authorities have stopped a protest in Rabat against the kingdom's move to normalise ties with Israel.

And here is an interesting Jewish take one of my readers sent in response to this article: