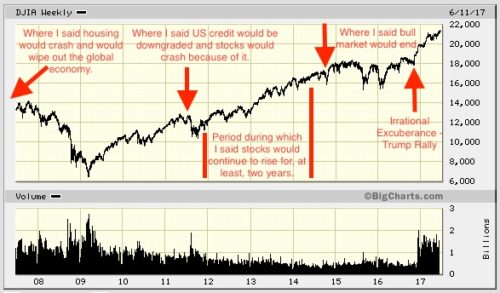 I’ll let the chart speak for itself. During the first part of the chart, I did all my writing in newspaper articles, so you won’t find support here on this blog or those early years. I began the blog in 2012. The rest is history.

As for the Trump Rally at the end, I didn’t predict it (any more than anyone did), but only declared it the typical euphoric rally (period of irrational exuberance) that comes before a crash, and you can see that it is far more exuberant than any period in the past.

What has changed, making it all different this time

We have learned this year just how much central banks are directly buying stocks, which has not been the case in the past. It was, in fact, considered extraordinary when, during the start of the Great Recession, the Fed bought corporate stocks of failing companies as a way of bailing them out. It was practically unheard of for them to jump in and stop the naturally selective process of bankruptcy in that way.

Now, however, the Fed has its colleagues in other countries buy huge amounts of healthy corporations (such as Facebook and Apple), not to bail out failing companies but to bail out a stock market that would, otherwise, be crashing badly. (For instance, we’ve learned recently that Switzerland’s central bank suddenly owns more Facebook stock than Mark Zuckerberg does. That one bank alone bought $8o billion worth of US stocks in recent months.)

Since central banks can create infinite amounts of fiat money out of thin air, their new path of buying stocks directly in order to shore up entire markets means they can pretty much prop the market up until economic wreckage in the general economy is so bad that it makes no sense to continue the farce or until they want to crash it in order to bring on a new economic era (or perhaps to get rid of a president they don’t want?). Whatever their reason, it will probably only crash when they decide to start unwinding their balance sheets or, in the very least, to stop propping it up with additional purchases (as China and Japan have done to save their dying stock markets).

So, the market is completely useless as a gauge of how the economy is doing because it is now entirely rigged by central banks and algorithm-based trading machines. In fact, the algos actually jockey the market in one direction with tiny trades just to suddenly make a surprise trade the other way. (More on that in an upcoming article.) I am, however, a person who writes on macro economics, not on stock markets; and the stock market no longer serves any purpose in terms of writing on the overall economy. It will likely follow the economy down reluctantly, not lead it, and not accurately reflect it. It is a central-banking mirage of wealth.