Home » Uncategorized » The Trump Card of American Politics
« GREXIT 2015: Europe self-destructs but doesn’t know it yet
Bursting Bubbles: China’s Bubble Burst, What Next? »

The Trump Card of American Politics 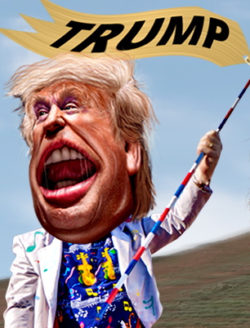 Yet, Donald Trump and Bernie Sanders — who stand on opposite ends of the political spectrum — are also the political candidates who are speaking most directly to a seething undercurrent of the American populace — a growing sea of people who have had no champion for decades.

The current government makes a cartoon like Trump stand out as an interesting and hopeful political choice. If liberals in the Obama administration were doing a better job of manning the gates at the border, the Don wouldn’t be able to raise so much support for his own candidacy. (The same can be said of Republicans, who have also turned a blind eye to illegal immigration for decades.)

If ILLEGAL aliens were actually sent home for being illegal, then they wouldn’t be out in the streets killing Americans, as Donald Trump loves to tell. While it is likely less than 1% of the illegal immigrant population that is doing this, the very fact that even those illegal aliens who are known criminals are turned out on the street so that they CAN do this, when the government is required by its own laws to deport them, creates the room for Trump’s argument. When the president refuses to enforce the law, he gives rise to a strongman candidate who will.

But it’s worse than lack of enforcement. Obama openly promises amnesty to illegal aliens as a coy plan to create a wave of illegal immigration that is too big to stop in order to justify the need to allow these people in BECAUSE the wave is too big to stop. He’s not dumb, so don’t give him a break here.

President Obama has deliberately opened a FLOOD GATE of immigration that competes against workers in this country. He knows full well that, if he talks up amnesty (without using that unpopular word, but talks up the concept) and if he openly flouts deportation, he will create a huge wave of illegal immigrants who see his administration as their last chance to get in the door and grab that amnesty while its being offered. If he can make the wave big enough, he can force change to American immigration policy. He can claim, as he now does, that the problem has become too big to ignore, and there are too many people to deport. Never mind that he subtly did all he needed to in order to make the problem as big as possible by not enforcing deportation laws and talking amnesty at every opportunity (while avoiding the actual word).

As a result, the president creates room for Trump’s argument to thrive among a population that witnesses this happening but feels powerless to stop it because Republicans don’t do anything to stop illegal immigration either. If either party REALLY wanted to stop the importation of illegal migrant workers, the solution is cheap and involves almost no hostility and can quickly be carried out. Jail (don’t just fine) the people who employ illegal immigrants. The jobs would dry up fast, and the jobs are the only reason most of these people want to come here. Dry up the jobs, and you dry up the Rio Grande border crossing.

Nevertheless, if Obama were willing to enforce the immigration laws that already exist, rather than telling the entire nation and the courts that he doesn’t have to because he doesn’t want to, then there would not be this growing, seething groundswell of support for an egotistical cartoon like Trump who says it like it is.

Economics trumps politics whenever the economy is down

Is it any wonder that wages have not gone up when Obama has done so much to bring wage competition into the country by turning a blind eye to enforcement against illegal immigration? Obama is, at the same time, doing all he can to create more paths for legal immigration by people who are willing to work for far less than those currently living in America.

Since the Great Recession, Obama has allowed 1.5 million LEGAL aliens into this country. Almost exactly that same number of jobs have been lost during that time and then replaced with much lower paying jobs. It was not the people who held the higher-paying jobs who, then, filled the lower-paying jobs, even though the administration would have you believe these new jobs mean the unemployed have been re-employed.

No, those people who lost their good-paying jobs have stepped out of the labor force. They’re no longer looking for jobs so are no longer counted in unemployment statistics. That’s because the new jobs are such a huge step down in pay and benefits that they can’t bring themselves to plunge over the career cliff just because they’re desperate.

Incoming immigrants, however, readily took lower paying jobs because they’ve buy ambien reddit been desperate for a long time. Those jobs sure beats the nothing many of them had at home. Democrats and Republicans are both forcing American workers to compete against that kind of desperation, which creates its own desperation in America. Is it any wonder that wages have remained suppressed for years when Republicans and Democrats are both doing everything they can to bring in cheap labor resources?

There is a lot of anger out there for Trump to tap into because neither Democrats nor Republicans are looking out for American laborers. Both have created numerous treaties that have provided cheaper labor resources in Mexico, China, and India that Americans have to compete against. Both parties have turned a blind eye to illegal aliens who work for much less than Americans are willing to work for. Quite frankly, American workers have no friends in government because both parties serve management, not labor. Both parties know who butters their bread, so both parties serve the monied interests.

We have an administration and congress that have, for more than six years, focused their economic reconstruction gesticulations on bailing out rich bankers. The present government deliberately made banks that were too big to fail even bigger than they were under the Bush administration. It created trillions of out of nothing, which it put directly into the hands of bankers, not in the hands of the middle class.

If either economics or immigration are issues that matter to you, then your two strongest candidates are the anti-Republican, Donald Trump, or the socialist independent, Bernie Sanders. While Sanders is not speaking out against illegal immigration, he does speak out a lot against sending American jobs overseas and bailing out fat-cat bankers. He speaks out against giving bankers free reign to keep spoiling America.

As much as people care about the economy and see immigration as a huge threat to their few remaining good-paying jobs, they fear insecurity even more.

Ask yourself the following question: IF OBAMA IS UNABLE TO KEEP HUNDREDS OF THOUSANDS OF LATIN-AMERICAN CHILDREN FROM CROSSING THE BORDER ILLEGALLY, as he claims to be, why would anyone with a rational mind think he is able to keep highly skilled, highly motivated terrorists from crossing the border illegally?

If you cannot even stop a child from getting into the country, you will never convince me that you are managing to keep out people far smarter because of their age, who have gained cleverness from years of experience and who are far more motivated because of hatred and deeply held religious beliefs and social and political grievances.

Where there is no rule of law, there is insecurity. We have now a liberal administration that demonstrates no respect for the constitution. In fact, everything about the Obama administration reveals that Barrack Obama sees the constitution as a barrier to social justice and not a guarantor of justice. Its gun provisions, its freedom of hate speech, its citizenship requirements, its limitations on the power of the president when it comes to legislation … these are all obstacles to the “progressive” world Obama wants to create.

The constitution is a tired, antiquated document that gets in Obama’s way so that he has to find clever ways to work around it. His focus is always on how he can push the envelope, so he tries to rule by decree. As a result, I think he holds the record for presidents who have had to be told by the courts that they must uphold the law and operate within it. He is supremely arrogant in his belief that, as a good attorney, he can find technicalities that circumvent the constitution; and he’s been reigned in several times.

We also have a president who believes spying on every phone call in America and every email message and every foreign friend of America is good policy (a plan that Bush implemented, by the way). Even liberal media heads say this president runs the least transparent White House in history, having promised the most transparent. None of that adds to Americans’ sense of security.