Home » Uncategorized » President Donard Trixon and the Trump-Putin-Nixon Water-Tower Coverup Scandal
« Did Trump Get Thumped … or Supporters Get Dumped?
If Wannacry cyber attack didn’t make you wannacry, the next one will! » 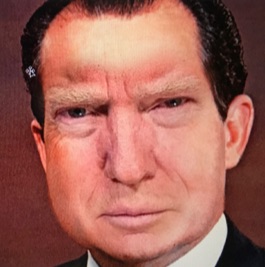 I know I said I’d stay closer to economics in my commentary and not so much pure politics, but today became so surreal, I couldn’t resist. I couldn’t make stuff up this rich if I were drinking electric Kool-Aid while mainlining acid here in the whacky world of President Donard Trixon and the Republicrats.

First, the basic situation: President Trump fires FBI Director James Comey who is hated by Democrats for the bungling manner in which he handled the scandalous Clinton emails that were allegedly obtained and made public by Russia in collusion with Donald Trump. During the campaign, Candidate Trump praised Comey’s breach of every known protocol on how the FBI handles sensitive information, especially politically charged information, and his move outside the chain of command. (Deciding not to prosecute Clinton was never properly Comey’s decision to make or announcement to make, but rests fully in the attorney general.)

Comey’s behavior, seen as bizarre by both Republicans and Democrats, single-handedly gave the presidency to Donald Trump. I think that’s fair to state because of the undeniable fact that Clinton immediately lost about 8% in her approval ratings and never fully regained that loss, while Trump’s margin of victory in many of the states that he carried was less than 2%.

Candidate Trump loved James Comey, but that relationship soured when Comey became the man in charge of investigating President Trump. So, now, the same Trump who praised Comey’s actions as a candidate fires him as president. Moreover he fires Comey specifically over the exact same actions that he praised Comey for as Candidate Trump.

The capital clowns are bouncing left and right today

As Trump flips, the Democrats all flop. The same Democrats who wanted Comey fired and criticized Trump for keeping Comey on as head of the FBI and who recently scoffed at Comey for saying he was only mildly nauseous over the possibility that his actions might have changed the election, now rebuke Trump for firing Comey for the very reasons they all originally wanted him fired. 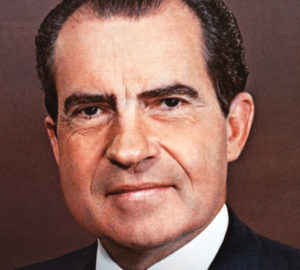 The Democrats, of course, state Trump has covert reasons for the firing, alleging a Nixonian coverup. Comey, they claim, was on to Trump, so Trump needed to get rid of him. Trump, they claim, just turned the Trump-Putin electioneering scandal into a near-perfect copy of Nixon’s Watergate scandal. They compare the surprise termination of James Comey to the Saturday Night Massacre when Nixon surprisingly fired independent special prosecutor Archibald Cox, who was investigating Nixon’s role in the Watergate scandal, wherein the Watergate Hotel was bugged for campaign reasons at the president’s orders, just as President Trump has alleged President Obama ordered the bugging of Trump Tower for campaign reasons.

As I keep drinking the Kool-Aid, things gets more surreal than I ever thought they could

This very next morning, as Trump is struggling to distance himself from the accusations of firing Comey to cover up Trump’s own Russian collusion scandal, Trump announces and holds a surprise closed-door meeting with …  the Russians — specifically Foreign Secretary Sergey Lavrov, and Russia’s Ambassador Sergey Kislyak — and with Putin’s official American friend, Secretary of State Rex Tillerson.

Doubling down on that bizarre strategy in order to also distance himself from the Democrats’ Nixonian comparisons, Trump invites the press spontaneously into the oval office at which they are surprised to find Trump proudly sitting beside Nixon’s infamous Secretary of State, Henry Kissinger, whom some regard as a war criminal during the Watergate-Vietnam-war era.

Trump, then, boasts that he and Kissinger have been friends for years and that they were just meeting with Russia to discuss the Syrian war, where Trump is also accused by some of intensifying the conflict in order to change the public conversation in the press away from his supposed collusion with Russia. Who better to join the conversation between Trump and Russia over the current war than an ancient war criminal of the Nixon era? Just a coincidental meeting between old Watergate-era buddies and new Russian friends.

The world is wobbling on its axis today in a drunken stupor, my friends.

MAY 12 UPDATE: The Trump-Putin-Nixon Water-Tower Coverup Scandal blows its own lid off!

Yesterday (the day after I first published the article above) Trump was interviewed by Lester Holt on NBC and contradicted everything his press team had said about the firing of FBI Director James Comey, stating that it was entirely his idea from the beginning to fire Comey and that his reason was particularly related to the FBI investigation of the Trump-Russia conspiracy, though Trump implied his move was to help the investigation gain more credibility (and speed), not to impede it. Apparently, he actually believes he remains such a convincing snake-oil salesman that people will believe him when he says in an interview that his real purpose is to help the FBI investigate him and Russia more thoroughly (albeit expeditiously) and to build America’s trust in the outcome of the investigation.

Then today, as if Trump’s immediate contradiction of his entire press staff wasn’t odd enough, President Donard Trixon purposely established the most blatant tie between himself and Tricky Dick Nixon he could possibly have come up with. In order to prove he’s not a crooked Dick, he threatened (as Richard “I’m not a crook” Nixon would have done) the FBI director that he just fired (as Nixon would have done) by implying in a tweet that he will (in a manner that begs Watergate déjà vu) release the SECRET TAPES he apparently has of conversations between himself and James Comey!

James Comey better hope that there are no "tapes" of our conversations before he starts leaking to the press!

Oh, my goodness! Even as numerous readers on Zero Hedge criticize me for laying out the Nixonian comparisons, Trump decides to heap more ready-made material on top to help me prove my case! Yes, if the former FBI director dares to act like Deep Throat (the high-level FBI director who became the primary informant during the Watergate scandal) by leaking information to the press (as Deep Throat did to Bob Woodward and Carl Bernstein of The Washington Post), Trump implied he will use secret tapes he has apparently made of his conversations.

Oh my gosh! Just when I thought the Nixon connections couldn’t get any stronger! And Trump is the one creating all of them!

The result, of course, of this blatant attempt to silence the FBI, is that leaks are now bursting out everywhere:

At a moment of crisis, the White House looks surrounded on the outside and divided on the inside.

“It’s image-making on the inside and people trying to protect themselves. There is a deep streak of paranoia among staff. The communications team shit the bed on the Comey firing and now the war with the FBI has them all scared and throwing each other under the bus.”Thank God I don’t work there. If I did, I’d be dialing up my attorney.”

I think, and have stated even before Trump was elected, the Trojan horse is Trump. This is a White House falling apart at the seams as everyone is starting to realize they may really be serving a lunatic president. Like Don Quixote jousting at windmills, this Don has gone from fighting the deep state to fighting Deep Throat (or, at least, someone he fears will become Deep Throat). But the most amazing part of this is that, each step of the way, Trump is the one setting up scenes that are screaming for comparisons to Richard Nixon. He has now filled the chocolate box with morsels of Watergate-tasting treats ready-made for the press’s consumption.

Trump’s own suspicious nature (like Nixon’s) creates suspicion. For example, I now ask what exactly is it that Trump so greatly fears James Comb-me-over will leak? At this point, I more than suspect something is there because “leaks” (Trump’s chosen word — and Trump “has and uses the best words” — are about facts you down’t want known, or they wouldn’t be called “leaks.” Trump’s not-even-slightly-veiled threat to Comey could have warned that he would reveal his recordings if Comey “lied” about the president or “denied” the truth or “fabricated” things to be more than they were.

However, Trump did not threaten to reveal secret tape recordings if Comey comes out and lies about him. He threatened to reveal secret recordings if Comey “leaks” information. It’s not a leak if it’s a lie. So, Trump practically admitted there is truth Comey knows that Trump is very afraid of — so afraid that it appears to have sent him completely out of control of himself as he actually threatened Comey in a very public way, should Comey come out with any of it.

And, of course, threatening the just-fired FBI director if he comes out with any information is a thinly veiled threat to the entire FBI because, if Trump will play get-even with the beloved director, he’ll play get-even with any one of them that dares to open his or her mouth. How close is that threat from the most powerful person in the world (and the FBI’s commander-in-chief) to being an illegal impedance of justice?

Unbelievable! This is just getting richer by the day as we watch President Donard Trixon dig his way deep into the manure pile of history and then pull it down over his own comby head.

Is this what it looks like when a narcissist who started his career in the Watergate era self-destructs? This week’s stunning images of self-destruction and of a White House flying apart at the seams as its press agents literally run for cover in the hedges and beg news agencies to “turn the lights off” will be talked about for years and years to come.

The meltdown has begun.