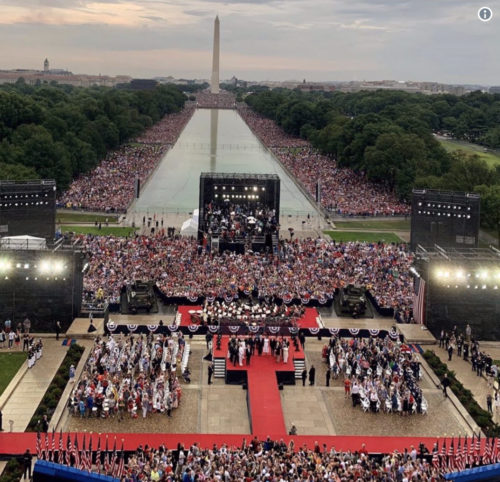 Right after Trump’s inauguration, I ran an article about how incredibly fake the news coverage was about his inauguration. (Those reading my site know I’m not a big Trump fan, but credit where credit is due and calling fake where calling fake is due.) The media was nothing short of spectacularly fake in the news it contrived that week on CNN, the New York Times and the other major fake media, and they mostly got away with it.

Here for reflection is the image the mainstream media ran with that purported to show Trump’s inauguration crowd was pathetic compared to Obama’s:

The image was true, so how it could it be lying? You can’t lie with the truth, right? The photos were even taken at the same time, so clearly Trump’s crowd was completely a joke, right? That was the logic the mainstream media presented to make Trump look as pathetic as they possibly could. Yet, here is another equally true image of Trump’s inaugural crowd that they buried:

The differences were easily explained, and I laid out all of them in the article linked above. Here’s a short explanation: Trump’s crowd simply arrived a little later. That’s it! Posting images from the same time of day from the same mall camera made it appear the media was giving as accurate of a presentation as possible, but really it was just the opposite. All they proved was that Trump’s event started later! By the time Trump was speaking, his crowd was almost as big as Obama’s first inauguration and easily as big as Obama’s second.

Consider, also, that Obama’s first inauguration was a uniquely historical event — the inauguration of America’s first black president. People might have wanted to get to something like that early since it is all festival seating. Consider, too, that it happened in a city where the majority of the population is Black. Consider that Black people all over the country would have been thrilled to travel to see a unique event they had long been hoping for. Consider, moreover, that over a hundred anti-Trump groups had sworn to block the streets of DC in order to prevent Trump’s inauguration outdoors from happening at all. Is it much of a stretch to think the anarchists might have had a small amount of success in intimidating or slowing Trump’s crowd (though obviously not much). Trump’s dedicated audience was determined and made it through the obstacle course anyway.

But now we have the photo below of the mall packed out even on a rainy day. And what did the mainstream press do; they speculated before the event that the crowds would be pathetic just like they did for Trump’s inauguration.

Not bad for a rainy day:

As it turned out, the only crowd that was truly small was the one mocking Trump:

Now THAT’s small! Maybe someone should have brought sandwiches. A single brown bag would have sufficed.