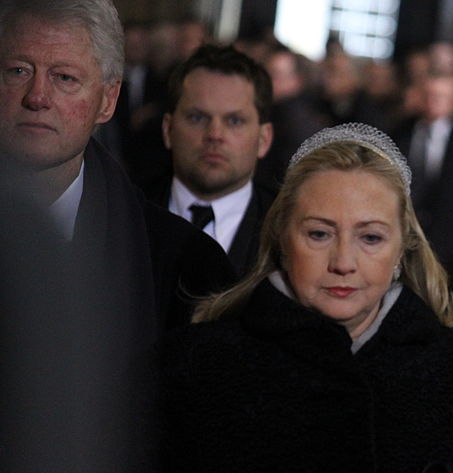 When I published my list yesterday of events that were rapidly building up for Hell Week, I left one announcement off the list that was sorely tempting to include because it sounded massive in importance. However, I could only find it on one source, and that source wasn’t reliable (all other sites that mentioned it referenced that same source). Now, however, the Clinton campaign has given me reason to believe a stunning revelation could be coming.

The information I came across yesterday was posted in a forum and was supposedly an announcement by the hacking group Anonymous. It claimed that Anonymous has been working with Wikileaks for several weeks on a release of videos that would be absolutely devastating to the Clintons. (I won’t say what the salacious material was at this point because I don’t want to help spread rumors in case they are as false as seemed likely to me until this morning.) “Anonymous” said it would be released through Wikileaks on Saturday.

Rather than publish the story in advance of the release (in case it was a hoax), I watched regularly through the day yesterday to see if it showed up on Wikileaks so I could, at least, be one of the first to publish the story to my readers if it happened; but it didn’t. So far no hint of such a story has appeared anywhere on Wikileaks’ site. I had three reasons for thinking it was likely a hoax and not including it in yesterday’s article, even though it would have been the biggest headliner on my site this year:

But this morning the Clinton campaign communications director made a announcement of her own that makes me wonder if Annonymous and Wikileaks really do have a bombshell of documents and videos that will destroy the Clintons:

Friends, please remember that if you see a whopper of a Wikileaks in next two days – it’s probably a fake.

Really? Only probably fake? What kind of story is the Clinton campaign trying to get out in front of here? Let’s think carefully about that statement:

[amazon_link id=”1455568872″ target=”_blank” ]Crisis of Character: A White House Secret Service Officer Discloses His Firsthand Experience with Hillary, Bill, and How They Operate[/amazon_link]

Think about that last point in particular. It now makes sense why the Obama Administration made such an extreme threat in the last two days as to warn Russia that, if any hacking occurs that releases documents this week that interfere with the election, the US will respond with cyberwar against Russia. Why make a massive threat against a nuclear nation and convey it by mainstream media like NBC unless you know one of two things:

I mean, threatening a former superpower with cyberwarfare is major stuff. So, you don’t do it without a big reason. Therefore, one thing is certain: both the Clinton campaign and the Obama administration are very afraid that something massive is about to be revealed by Wikileaks — something so significant that they will risk threatening war to stop it. Since Wikileaks has been so careful to never publish a false document, what is the establishment so afraid Wikileaks might have found? Still think this isn’t Hell Week?

I won’t jump ahead of the facts here by saying there will be a Wikileaks election bombshell. I’m just saying there is certainly a high level of fear in the establishment that there are some truly major things that could come out in the next two days:

Makes you wonder what it is they think could come out?

Still think this isn’t going to be Hell Week?