Home » Uncategorized » “Early Summer,” 2018, When the Stock Market Generals Surrendered
« Reading the Next Recession: Will the Great Recession 2.0 become The Great Depression II?
Flying Upside Down over Wonderland in a Cold-Air Balloon about to Burst: Welcome to Negative Interest in Bond Bubbleland » 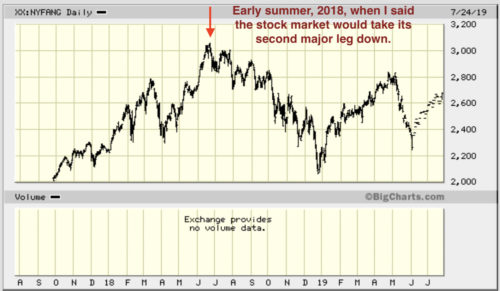 One thing I never posted and should have when I’ve stated that the stock market did take its second major leg down in the “early summer” of 2018, as I had predicted, was this graph of the FAANG stocks.

The index shown here should be considered a major stock index in one all-important sense: The FAANG stocks (Facebook, Apple, Amazon, Netflix and Google) had for a decade been what are called “the market generals,” meaning a small number of stocks that is leading the market in every advance it makes. These stocks, along with the few other major tech stocks that are part of their company on this index, had fulfilled that leading role more intensely and tenaciously than any stocks ever had. Many times they were the only stocks advancing and taking the other indices higher.

In the Summer of 2018 when my solitary crow was croaking about how the stock market, which had plunged in January as I said it would, failed to take its next big leg down, as I had also bet it would do, this chart could not have proven what it does now. There was no way to know until months went by how severe and possibly permanent the breakdown of the FAANG generals that had led every rally would turn out to be. That is why I argued back then we would need time to know whether I had lost or won my bet before I, myself, surrendered my website; but I wasn’t going to be premature to claim I had won either.

Now that summer is here again and I’ve made another bold prediction for this summer and we have a lot of perspective of time by which to evaluate my prediction for last summer, I think it is a good time to point out that you can see, as a collective, this index of stocks did begin a very protracted breakdown in June of 2018. In fact, the summit where the FAANGs rolled over and fell into retreat occurred on June 21st, the first day of summer; so you don’t get any more “early summer” than that.

One company at a time, these trillion-dollar dynamos surrendered their leadership, and each one of them crashed until the group as a whole lost a third of its market value. That’s a full-blown bear market in the leading stocks that everyone had cheered, loved and praised throughout the previous decade of recovery. It may have taken half a year to fully play out, but the early-summer beginning of that bear-market crash that badly damaged the entire US stock market is now an unmistakable fact.

How badly did the defeat of the generals shake the entire market? Well, here is a headline from that summer: “The stock market just experienced the most seismic shift from growth to value since Lehman Brothers, says Nomura“

Their collapse was “seismic!”

McElligott’s comments come after the Nasdaq Composite Index … booked a three-session tumble that drove the technology-tinged index to its lowest level in about three weeks—a recent unraveling sparked partly by disappointments in quarterly updates from key members of the so-called FAANG contingent…. Both Facebook and Netflix saw their shares fall into bear-market territory on Monday … and nearly 40% of the S&P 500’s technology sector is in correction territory…. What’s more, the NYSE FANG+ index which comprises many of the aforementioned FAANG names as well as Twitter Inc. [etc.] … fell into correction territory…. The index had enjoyed stellar performance, up 23.4% for the year, compared with a 2.8% gain for the Dow Jones Industrial Average.

And that was just the beginning. That’s the level to which these stocks had already fallen by August 1, and they still had a LONG way to go.

In the graph below, you can also see how, even though the S&P 500 did not join the FAANGs in their summer fall, the decline of these longtime leaders travelled with the S&P and other indices through all of their major action that came in the fourth quarter (when I had predicted the market’s worst plunges would come). The generals simply moved, as generals do, in a much more boisterous way (on a percentage basis):

Just as the S&P didn’t break ranks in the summer, the FAANGs didn’t break in January, 2018; but the S&P sure did, taking over half a year to recover all that it lost, only to break again much worse in the fall as an “October surprise,” which I had also said would be the most likely timing for the worst drop to begin.

You can also now see that, in spite of this year’s rally, these wounded and former leaders remain far short of gaining victory over the bear that took them down. They recovered two-thirds of the ground they lost, then plunged off a spectacular cliff again in May of this year and, so, to date have only recovered about half of the distance they retreated since more than a year ago last summer!

The breaking of the FAANGs is a spectacular crash for being the group of market heroes that everyone had thought was practically unassailable. It was, indeed, seismic, in terms of how it weakened the entire market by taking away its leadership. The bigger they are, the harder they fall. Thus, the generals remain broken, though the rest of the market recovered … for awhile.

While I won’t ever bet my blog again because those who lose don’t pay up and don’t even admit they lost, I have made another brazen prediction for this summer. As with last summer, it will be months before we know how it comes out because that is simply how recessions are declared (a minimum of six months after they actually begin, sometimes longer than that). They are declared, one might say, retroactively.

So far, however, more and more major signs are falling in line with that prediction. In fact, numerous signs are falling in line with it, as I’ve pointed out in recent articles, including the Fed’s own promise that it is about to leap back into economic recovery mode. The Fed would not leap back into easing, even as “an insurance” measure, if it didn’t see a large threat that merited insuring against.

Economic threats are besieging our nation while the generals are down, and our financial Federales are almost out of ammo and dry powder from the last war they fought. Meanwhile, allies for our traders are shooting their own in friendly fire with their trade wars as if they’ve become traitors to our allies. The American economy doesn’t look like it has much of a cavalry coming to its rescue this time.