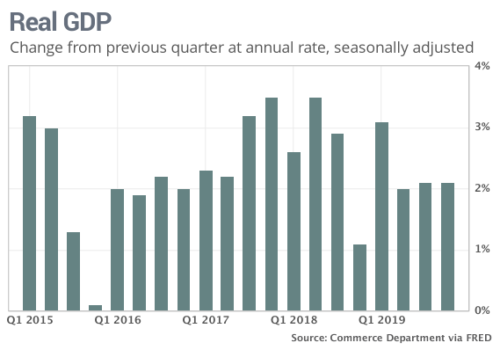 Having predicted last year that a recession would begin in the summer of 2019 and that it would likely start with a major repo crisis, I am now proven wrong by 2019’s fourth-quarter GDP. If the repo crisis that started in the final week of summer had actually been the start of a recession, we would have seen fourth-quarter GDP go negative. Instead, it came in at 2.1% growth.

All of this year’s quarterly year-on-year readings average out to 2.3% growth over the full year, which is worse than 2018’s average of 2.9%. That means the massive Trump Tax Cuts and spending increases have netted us a worse economy, year-after-year; or you can blame that on the trade wars or the Fed or all of the above (as I would). In the very least, we certainly have not seen any improvement due to the tax cuts.

So, I was wrong in my ambitious 2019 prediction of a recession starting in the summer. I knew I was out on a limb compared to what anyone else was saying, and I was wrong.

O.K. You knew that was coming. If you are one of my detractors, you were waiting for the other shoe to drop. Well, I, at least, gave you a line you can quote out of context later to say I even admitted I was wrong … but here is the “but,” and it’s much bigger than equivocating about whether “seasonal adjustments” allowed room to goal-seek a final number the Trump administration wanted to present as we head into an election year:

…but … let’s consider a few major business/economic factors outside of GDP because GDP is not the only factor used to officially declare recessions (which are always declared retroactively).

A recession is when the economy declines significantly for at least six months. There’s a drop in the following five economic indicators: real gross domestic product, income, employment, manufacturing, and retail sales. People often say a recession is when the GDP growth rate is negative for two consecutive quarters or more. But a recession can quietly begin beforethe quarterly gross domestic product reports are out. That’s why the National Bureau of Economic Research measures the other four factors. That data comes out monthly. When these economic indicators decline, so will GDP. The National Bureau of Economic Research defines a recession as “a period of falling economic activity spread across the economy, lasting more than a few months.” The NBER is the private non-profit that announces when recessions start and stop. It is the national source for measuring the stages of the business cycle.

Several major changes that came about in the summer of 2018 scream recession:

In the very least, with manufacturing solidly in recession and earnings in recession, and the still ongoing repo crisis that I said it would all come with, I was partially right. Is it unreasonable to suggest that, without three interest-rate cuts and without the Fed’s face-losing leap back to QE, the whole economy would have entered recession at the end of summer; or should we just believe that such huge and rare responses by the Fed had no effect whatsoever? After all, we were already at levels of interest that are considered to be economic stimulus, yet these bold measures barely managed to hold the economy at its anemic 2.1% growth level.

You have to either believe the Fed’s multiple rate cuts and $400-billion-plus in QE had absolutely zero effect on the economy (since we stayed frozen at 2.1% growth) OR believe we would have gone a lot lower without those big measures, so their effect was to keep us from falling further.

Looking under the GDP hood

There is still more to consider.

Consumer spending, which had been the economy’s salvation in the summer of 2019 fell off hard in this last GDP print, dropping by more than half from an annualized 4.6% growth in the second quarter of 2019 and 3.2% in the third quarter to 1.8% in the fourth quarter, less than half what it was in the spring.

Business investment and production also cut back, so what drove the overall GDP growth to keep it from falling below the 2.1% level at which it seems to have frozen in time?

The economy got an even bigger boost — though likely a short-lived one — from a sharp decline in the U.S. trade deficit. Exports climbed 1.4% while imports sank 8.7% in the fourth quarter. That’s the biggest decline since the end of the 2007-09 2007-09 recession.

The drop in imports stemmed mostly from an increase in U.S. tariffs on Chinese goods last September. Companies rushed to beat the tariff increases, then cut back on import orders to wait to see if the Trump administration rolled back the punitive measures.

That is the difference, right there! Almost the entire amount to which GDP growth remained positive was due to a machination of the trade war that has nothing to do with how the economy is doing. You see, imports are normally subtracted out of GDP while exports are added. With imports falling off so much due to the Trump Tariffs, GDP got a fake lift. We did not produce more for export; we simply imported a lot less, leaving a much smaller number to subtract from the GDP total.

By way of past comparisons, the positive/negative impact from imports looked like this over the years, with the drop in imports effectively adding 1.32 points to the 2.1-point total in GDP growth:

That contribution from net trade will not continue, and it is a smoke screen for what was otherwise a very weak quarter. If you exclude trade, you have an economy that grew less than 1% in the fourth quarter. Consumer and business spending is weakening.

Government spending also contributed to the positive side of GDP by rising 2.7%, mostly due to expansionary military spending on planes, ships, missiles, etc. Because war burns up a lot of equipment that has to be replaced, it has always been a reliable economic stimulant … until it breaks the government with debt, as happened to the former Soviet Union. We’re not immune to the same.

“The 2.1% headline GDP print gives the optical illusion of an economy chugging along at a moderate 2% clip at the end of 2019, but the composition of growth reveals a softer picture,” economists at Oxford Economics told clients in a note.

Where’s are markets going in all of this right now?

Yields keep dropping like a brick, as does the Baltic Dry index, small caps, transports, the banking sector never confirmed new highs, equal weight indicators suggest a major negative divergence inside a market that appears entirely held up by tech, and perhaps by only 5-10 highly valued stocks that are massively technically extended and control more market cap in a few stocks than ever before. At the same time we have a market more extended above underlying GDP than ever and now suddenly a potential trigger nobody saw coming: The coronavirus

So, you see, it’s not really a healthy picture: GDP frozen for three quarters running, keeping a good face on things but a false face because it is only an optical illusion that is an artifact of the trade war, major sectors of the economy solidly in actual recession for two full quarters now, bond yields still falling in a flight to safety as though investors see recession on the door step, causing the yield curve to invert all over again, more money leaving the stock market all year than entering, in spite of rising share prices, and now the indefatigable stock market is showing signs of trouble even after the Fed’s massive QE repo save. Maybe just a correction, maybe more.

This we’re supposed to believe is a strong economy? Fake news. The US economy may not have hit full recession in all sectors in the summer, but parts of it certainly did, and the rest is reeling … badly.