Home » Economic Predictions » Technically, This is Where I Think the S&P Will Find Strong Support and a Final Resting Place
« Bullheaded Dave Portnoy Gets Pounded with His Own Hammer
Stocks are Falling into Fall »

Technically, This is Where I Think the S&P Will Find Strong Support and a Final Resting Place 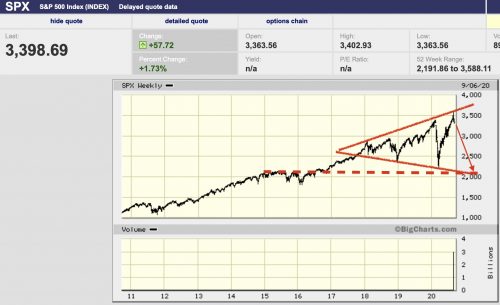 This graph shows where my mind goes every time I ask myself how far the S&P 500 is likely to fall before it finds a solid bottom.

As you know, I don’t make predictions based on charts, but clearly there is intense convergence of longterm support around the 2,000 level and strong indication of a subliminal desire in the market to keep plumbing the bottom to find that depth.

Dave-Portnoy daydream traders notwithstanding, this is where the market’s undertow wants to pull it. I’m not saying it will get there, but that is the level at which the stock market would finally find substantial technical support and possibly economic convergence. The economy, at present, would strongly support stocks at that level … unless the economy falls further; then even that level could look overvalued.

If the economy goes lower (more unemployment than where we now rest and continued decline in overall GDP (not GDP growth rate), here’s the next lower level and likely ultimate rock bottom. As you can see, the market’s longterm trend PRE-Fed rigging would support a slightly lower level as the maximum return to trend.

The strong support reflected in the first graph will probably prevent that from happening; but this would be the worse-case scenario, provided the earth doesn’t get hit by some greater natural castastrophe than what we have already seen. At the 1,500 level there is tremendous support, even without Fed interventions.

Of course, there is also the imaginary line one could draw straight across the bottoms of the last two recessions (S&P about 800); but we’ll leave that worst-case scenario for something like a major asteroid impact because those levels were established by where the market found proximate support from its PRE-FED trend line, busting slightly slightly below the line the last time but then recovering to bounce along that trend line for the next two years.

That’s all. Just a couple of snapshots this time of the possible paths ahead to keep in the back of your mind, which is where I keep them.

Such stuff as dreams are made on

Elon Musk, the demi-god at whose feet Dave Portnoy worships, after all, is already perfecting a brain-chip implant to “help us compete” with artificial intelligence in the sublime future that lies ahead. If that happens, who knows what coding the government will slip in or how it will manage to hack your artificially stimulated brain, even if Elon doesn’t give it a back door in — a whole new Fed frontier!

Maybe Elon is already testing the chip on himself like a mad scientist; in which case, bugs in the beta version would explain some of his bizarre misfires. (You can almost see the sparks and smoke of his fried genius brain inside his eyeballs.) Ah, what stuff the future holds for future themes on The Great Recession Blog — such stuff as nightmares are made on.

With a little vaccination digital identification patch, compliments of Bill Gates, who knows where the American oligarchs can take us? I hope to remain able to be here and shine some intrusive light into those dark holes the future holds.

Stay posted by keeping me posted

Don’t forget to consider supporting your intrepid and intentionally boisterous prognosticator. My next article will be another Patron Post on central-bank trajectories … unless, of course, this weird year of 2020, where my foresight seems to have been sharp so far, throws us another wild card.

Patron Posts, by the way, are not intended as a paid subscription — just a thank-you for your support that offers a wider-picture view of our trajectory. That support is what makes all the content here possible, as it is how I measure whether the content is TRULY worth something to people in their own estimation.

But, whether I can continue, is up to you, as dark times also press me to find and focus on avenues of writing that help offset the losses of unemployment for which I have so far seen zero benefits since my COVID layoff in May (March and April having been covered by my employer). Employment Security told me my article writing (though it is nothing but a small sideline of income) makes me self-employed (because of the rare times I got paid for my articles from one site I was writing for this past spring when unemployment hit).

On that basis, they determined I am unqualified because I’m also not a contract worker. Writing articles, as it turns out so far (though I’ve won an appeal but not seen the results of that either), has cost me far more than what I could have made by doing nothing at all and resting on unemployment.

That’s the cost of being honest in what you report to Employment Security, even when you know they won’t be able to comprehend the nuances. I anticipated it would play out that way but reported honestly anyway.

All the while, I have soldiered on with the writing that cost me those unemployment benefits (including the government’s $600 per week augmentation of UI benefits, more than I make per month off of contributions). I do so because the support of a few says this is meaningful to some (where it actually counts for them because it costs them something). That is meaningful at a heart level to me, too. One person has even just added some really strong support. So, thank you for that as it came just in time!

Support overall has fallen off to where it is less now than what it once was pre-COVID. Most who have discontinued have said they were discontinuing support because their financial situation has changed. I can certainly understand that. Mine has, too.

A few have said it is because Patron Posts don’t come often enough.; but, as I’ve said, Patron Posts are meant as a thank-you, not a paid prescription, because my goal is to make as much information (and hopefully insight) available to as many as possible during these dark times. What you are really paying for with that support is to keep ALL the content on this site coming because the ad revenue truly only covers the cost of hosting the site, backing up the site in a separate storage facility, and registering the domain each year so that Patron money can fully go to supporting the writing itself.

I won’t let the fall-off of support because of party politics determine my content. ONLY my sense of truth determines that. I’d rather quit writing on economics than change how I shine the light of truth and the sharp laser of humor where people don’t want to see; and I’m no more critical of Trump than you are likely to find me of Biden, if he wins.

Biden is just as likely to keep supporting the rich establishment as Trump did when he drained the swamp into the White House basement by putting Goldman Sachs and other banksters in charge of all financial departments of government … again … just as all presidents before him did.

Hence, the big Trump Rally in stocks that, for a fact, did NOTHING for the stagnant economy. The economy remained flat in terms of its growth rate and falling in terms of sales, manufacturing and eventually services, over the full course of time in which the stock market soared, and then it blew to pieces when the COVID comet hit earth.

Hopefully Employment Security eventually submits to the results of my August 5 appeal hearing. So far … still waiting. Your support is what keeps the light on. (So much for one of my rare pleas. Even National Public Radio makes such pleas more often than I do and takes a lot longer to make them!)