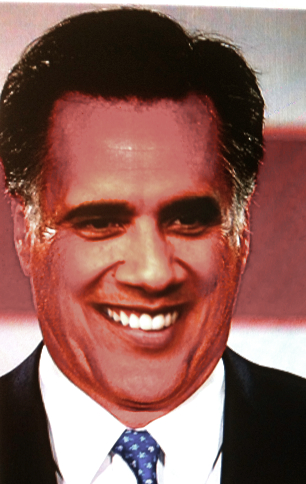 “A vote for Baritt Obamney is a vote

for more of the same …

or four more of the same.”

Baritt Obamney promises to be all things to all people. He will be the “change” you want him to be just as he was last time he campaigned for change.

Baritt Obamney for a change

He will say whatever you want to hear. Project onto him all your political hopes, for he is that man. He will change into whatever you are looking for. Barrit Obamney is the first man to have been awarded a Nobel Prize simply for existing.

As his first order of business after being elected, Baritt Obamney will dismantle the universal health care system he worked so hard to create while Governor of the Commonwealth and Liberal Stronghold of Massachusetts. “Universal health care was the right program for that time, and I’m proud I created it. As proud as I am of the internet, but times have changed and so have I because I’m the candidate for change.”

Baritt Obamney served as CEO of Spain Capital and Finance. As you know, Spain is broke and will soon be seeking bailouts. Obamny’s unparalleled experience in the exotic world of bailouts uniquely qualifies him to continue the rich bailout tradition enjoyed by America for the past four and a half years. Bringing his experience at Spain Capital to the fore, Obamney says, “If we cannot bail them out, we’ll buy them out.”

Baritt Obamney — a man for all political parties

As a Republicrat, Obamney will stand firmly beside the banks of Wall Street — as both of his former political parties have always done — in order to continue the greatest flow of capital from the public sector to the private sector the world has ever seen. Baritt Obamney will rebuild the prosperity of America from Main Street to Wall Street … or, at least, make sure it flows in that direction. Obamney has Wall Street’s endorsement. Obamney’s Chicago history gives him familiarity with gangsters, and his time as CEO at Spain Capital put him in the company of banksters daily. “From Gangsters to Banksters, I know the world of finance like the inside of my own pocket book.”

Baritt Obamney, a man without class

Baritt Obamney will never stoop to the class warfare of his opponents, which pits the poor against the rich. He believes class warfare should always trickle down from the rich to the poor. Obamney’s reduction of the capital gains tax to zero will assure the job creators gain plenty of capital in order to create more jobs in China and India. Obamney also recognizes that the wealthy build bigger and better houses than the poor, stimulating America’s damaged housing industry.

Baritt Obamney for a change in the weather

Under Obamney the devastation of droughts will become a thing of the past. Barrit Obamney will increase the funding for genetically modified food until it can be modified to where it does not need water. He will also fight global warming because cold climates burn more fuel, which is good for America’s oil industry

Baritt Obamney promises to keep guns out of the hands of crazies. “I will never buy a gun. If we eliminate guns plus smoking and alcohol as Mormons require, we will no longer need the Bureau of ATF, so that is one more branch of government we can eliminate.”

Baritt Obamney for a strong military and defense of Israel

While Baritt Obamney never served in the military, he did serve as a missionary to France where he proselytized Muslims living in an area once controlled by NAZIs. This gives him special diplomatic experience for convincing Muslims in Iran not to blow up Israel with nuclear weapons. A vote for Obamney is a vote for peace.

In the tradition of his father, Baritt Obamney promises to press congress for total tax disclosure by all political candidates at the end of his final term. “How else will America be certain that its loopholes are being used and are working the way they were intended?”

This fall, you have a real choice. If you just “can’t Baritt,”  vote for Obamney … or the other two guys … who agree with each other on just about everything. Vote for “more of the same … or four more of the same.”

Never say the two party system does not give you options, but why not combine them in one man for all men and women?

Baritt Obamney is the man for the job.

But what if you want to choose a woman for the job? Remember, Baritt Obamney is the candidate of change.

Be the change you want to see … 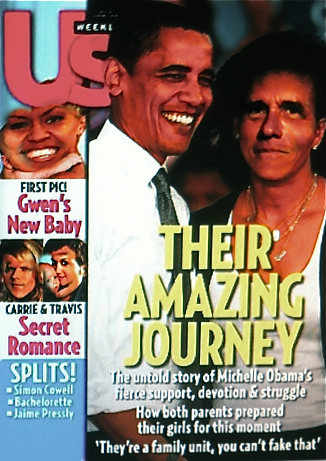 Baritt Obamney — a candidate for everyone!

(Romney vs Obama, Democrat vs Republican … what’s the difference? Both parties are owned by Wall Street. So, why not put the faces together in the melting pot and vote for Baritt Obamney, the best of both worlds? And while you’re at it, email this article to friends or like it or tweet it 😉  And check out this video. )

Read about the Great Debate — Obamney vs. Robama — or was that the Great Reprobate?