Deficits, Debts and Democrats vs Republicans — US national debt in graphs by year and president

As you read this article on Democrats vs Republicans when it comes to who did better or worse with the U.S. national debt, bear in mind that I am an independent voter. I cast my virgin vote for Ronald Reagan. I voted for President George II … but only the first time! After installing Bush 2.0, I repented. I refused to reboot the Bush administration and laid down my voting rights for awhile so as not to inflict more damage on America. I consoled myself by saying, “At least, I’ve learned not to do it again. I was not a hanging-chad voter.”

In fact, I’ve voted Republican more often than Democrat. I did not vote for Clinton or Al Gore. Bear all of that in mind, as you read the following, for I am writing against my own bias and was surprised by what I learned.

Personal income under Republicans vs Democrats

Here is a stunning fact in a simple graph: 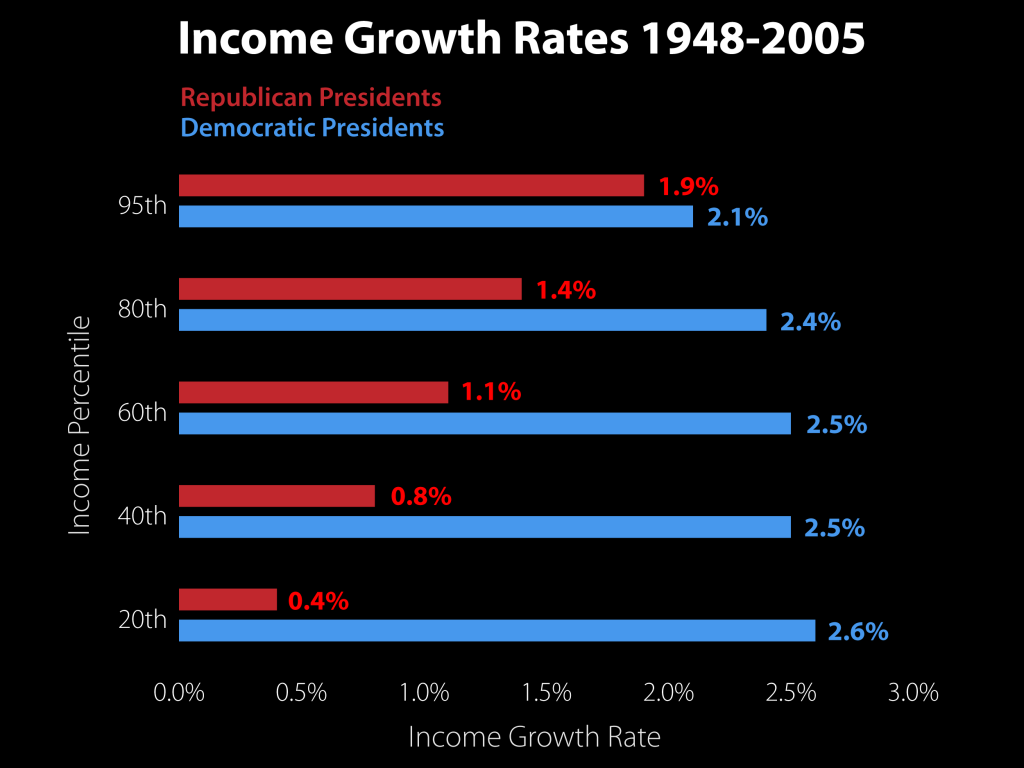 This graph goes against what I think would be conventional wisdom — that Republicans do a better job with the economy than those taxing, government-worshipping Democrats. Surprisingly, if you look at personal income growth over the last fifty years under each kind of president (Democrat vs Republican), you discover that no matter which income percentile you fall into, you saw your income grow more during Democratic presidential administrations than during Republican administrations.

But here is the aspect of these facts that shines the brightest for Democrats:

Just the facts. Possibly unsettling to some, but facts all the same. The graph shows even the 95th percentile as seeing more income growth under Democrats vs under Republicans, but the article notes that the difference is less than the statistical margin of error at that point, so not significant. From the 95th percentile up, individuals saw equal growth under either party. Both parties, you see, always look out for their richest supporters!

Seeing that graph caused me to wonder in defense of Republicans, “Did individual income under Democrats do better because Democrats blew huge deficit holes in the U.S. budget and, so, stimulated economic growth that led to income growth … by burdening the next generation with enormous debt? Did they cause the US national debt to balloon so that people gained this income at the government’s expense? After all, this income growth did not just happen down in the welfare section; it happened throughout the middle class and even above.

Escape the Coming Debt Crisis: Emigrate While You Still Can!  Learn more…

Republican vs Democrat on the US National Debt

The next US national debt graph is equally telling in its Democrat vs Republican comparison, year by year:

( Graphic provided by The Creative Commons and found on Wikipedia at: https://en.wikipedia.org/wiki/File:Federal_Debt_1901-2010.png )

(Click on graph to enlarge, or zoom your browser window.)

Studying this graphic, you can clearly see that US government debt by year after WWII (1945) declined as a percentage of the nation’s gross domestic product (GDP) continually all the way until the Reagan years. You can also see that most of those post-war years were under solid Democratic control in both houses. Throughout the years of Reagonomics, however, the United State’s national debt as a percentage of GDP — after decades of decline – grew rapidly and continued to do so under President George Bush the First. Then U.S. debt plunged for the first time throughout the Clinton years (when taxes on the wealthy were raised) and finally began to rise again during the Bush II years (when taxes on the wealthy were cut again … even more than they were cut by Reagan).

You might have already noted that the debt soared in proportion to GDP under President Obama, but the Obama years do not afford a fair comparison of Republican vs Democrat on the national debt because we entered what may eventually be called the Great Depression II during the Bush II years. Let me put it another way: I don’t believe for a second that Republicans, who presided over the creation of this global depression, would have fared any better than Obama when it comes to US deficits for the following reason: Obama has carried out exactly the economic policies that Bush switched to in his final year.

If you don’t think he has, it’s time to remember that, when the so-called “Great Recession” began, George W. Bush said he had to “give up on my Capitalist principles” and approved a 900-billion dollar bailout to be followed by ANOTHER 900 billion later if necessary. This second 900 billion was already scheduled to happen during the next administration (whether the next election turned out to yield a Republican president or a Democrat) and amounts to almost half of Obama’s accumulated debt. With his first bailout, Obama merely carried out what had been established in the final Bush year. From there, Obama has used the same resident “experts” Bush was relying on, such as Ben Bernanke, and has continued more of the same bad economic programming on his own. So, Obama doesn’t get to wipe his hands clean of these failed policies, as he has been utterly uncreative, but they are no different than what Bush began. Don’t let Republican leaders beguile you when it comes to Obama’s deficits. Almost a trillion dollars of the Obama deficits were planned and approved by Bush before Bush left office.

The Great Recession is too much of an anomaly to compare how Democrats do versus Republicans in a head-to-head match on US deficits and the US debt. Even the Bush tax cuts that started the U.S. back into deficit spending remain in place under Obama. So, there has been almost no real change in economic policy. Q.E. continues. Bailouts continue. Even the Obamacare medical program has yet to begin.

In case you are thinking that looking at the debt as a percentage of GDP skews the facts, let’s look at what the gross national debt has done, regardless of GDP.

US national debt by year and by president

Here’s an interesting timeline of Republican vs Democrat presidents in relation to growth of the national debt: 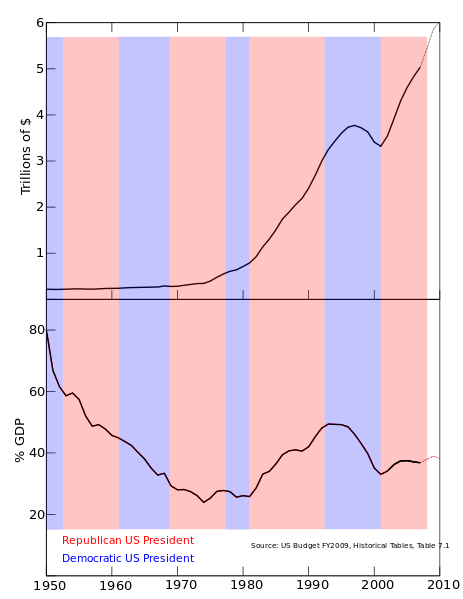 ( Infographic on national debt from Wikipedia, https://en.wikipedia.org/wiki/File:US_Debt_Trend.svg , provided for public domain use by its author, Dejo)

The biggest plank in Reagan’s platform, which he presents with poster infographics and considerable zeal is the promise to balance the budget against deficits that he claims will soon destroy the nation’s prosperity. Carter, he claims, is running the nation toward economic bankruptcy. 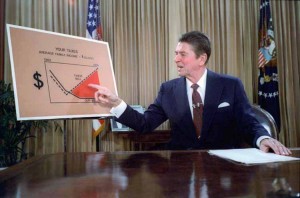 1981-1989: With full support from congressional Republicans, Reagan begins the worst annual deficits the nation has seen since WWII. During the Reagan and Bush I years, the gross national debt quadruples as a result of huge Republican military spending increases combined with Democrat refusal to cut social spending in order to make room for Reagan’s massive military spend-up.

1993-2000: As seen above, Bill Clinton inherits a national debt that is now ballooning at an alarming rate, but he gets an economic plan through congress that eliminates deficit spending entirely. (The Gingrich congress deserves partial credit here, too.) He does this largely by raising the taxes that had been cut by Reagan (which Republicans oppose) but to a point that remained a lot lower than taxes were before Reagan. Apparently, he strikes exactly the right balance in taxation because the recession of the Bush I year ends, and the country returns to growth. For the first time in decades the U.S. runs a surplus budget so that the gross national debt actually declines as we start paying it down with the budget surplus. It declines as fast as it had grown under Reagan … in part due to military cutback. At no time since WWII had the nation actually paid down its debt! The debt had declined as a percentage of GDP after WWWII only because GDP grew a lot after the war, but the actual debt, itself, grew continually after WWII (though only a in a trickle as the top graph shows). Clinton was the only president to reverse that.

2000: George W. Bush runs for president, inheriting the dot-com crash at the end of the Clinton era (a market correction of a bubble, something far less significant than the core collapse of an economy that we have today) … and something that would have righted itself as all stock market corrections do.

2001: At the very end of the Clinton administration, the CBO shows the United States is on track to pay off the entirety of its national debt within a decade! It’s practically a miracle after living with debt for many decades.

2001-2009: With full support from congressional Republicans, Bush begins running enormous deficits again as a way of pumping the economy back up from the dot-com crash. Bush hits the accelerator hard enough to double the gross debt that had already been quadrupled during the Reagan-Bush I years. Most of the new annual deficits that add to the debt are due to the Bush Tax Cuts, two wars, and the expansion of government. Bush manages to break the United States for the first time since the Great Depression just as Reagan broke the Soviet Union … by drawing it into military spending that it obviously could not actually afford. Same plan. Even Republicans like Representative Boehner freely announce the United states is “broke.” (A sentence any American would be deeply ashamed to say if it were not a fact that has to be admitted.) The entire world economy goes down the toilet due to sloppy credit rules and deregulation of banks that went way too far. This is not the crash of a bubble, but the collapse of the United State’s economic core. It’s a core meltdown! (That’s why I begin telling friends that we have entered another economic depression, not just a recession. Few believe me, but  four years later we have no real recovery and none in sight.)

2009: Barack Obama inherits a $1.3 trillion deficit from Bush. It’s a simple fact that most of this deficit was already budgeted during the Bush years; yet the Republicans immediately condemn Obama’s fiscal irresponsibility.

There is no getting around the fact that the Republican track record for deficit spending is abysmal or that the Great Recession began for the entire world in the eighth year of their watch under George Bush II. Not only has personal income for ALL segments of the population (except the top 1%) done worse during Republican administrations over the past fifty years, but the United States’ gross debt has skyrocketed under every Republican administration from the beginning of Nixon’s second term onward. That’s a numerical fact, and their feet should be held to the fire for it. Moreover, the top five percent of the U.S. populace pays a lower percentage of income taxes in proportion to their total wealth than do the bottom ninety-five. (See “Bush Whacked by the Bush Tax Cuts.”)

So, that’s why I haven’t voted for Republicans in some time, even though Democrats currently are carrying out the same lame bailout economics that Bush began. I didn’t change the facts in the presentation above to match the way I vote. I changed the way I vote to match the facts.

I particularly invite Republican debate in the comments section below. Correct me with facts … if you can!

For more on the US national debt and ways to end it, I invite you to read/watch one of the following:

For more reading on Republicans vs Democrats: