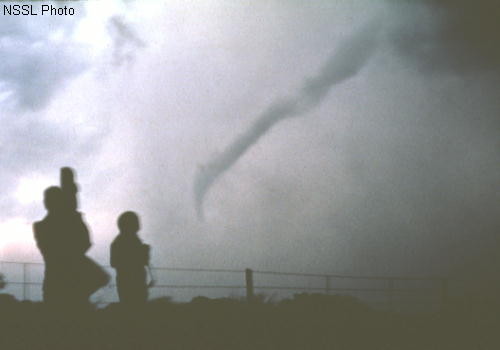 A supercell spawns tornados — sometimes many. The supertrends I present in the following list have the same power. Against this much larger storm, the quantitative easing of central banks along with their zero-interest policies are a mere breeze — a sniffle of discontent.

The first supertrend that reveals how much the mojo of central banks is now failing is the latest trend in interbank loans. You may recall that the biggest concern during the first year of the Great Recession was that banks no longer trusted each other and had stopped lending to each other. This was causing a credit freeze, and the initial Federal Reserve responses were intended to get that credit moving again.

Now, after seven years of central-bank empowerment, interbank loans are freezing up on their own, even though massive central-bank stimulus continues on a global scale: (Massive in scale but completely effete in accomplishment.)

The Bank of International Settlements has just released its latest international banking statistics, which run until the end of June 2015, and they make for some pretty horrible reading.

Cross-border lending fell by $910 billion (£589 billion), an enormous slump, and the largest since the fourth quarter of 2008, the worst bit of the global financial crisis….

Q2 2015 was the worst quarter ever, other than Q4 2008. (“Another Recession Warning: Global Bank Lending Is Cliff-Diving“) 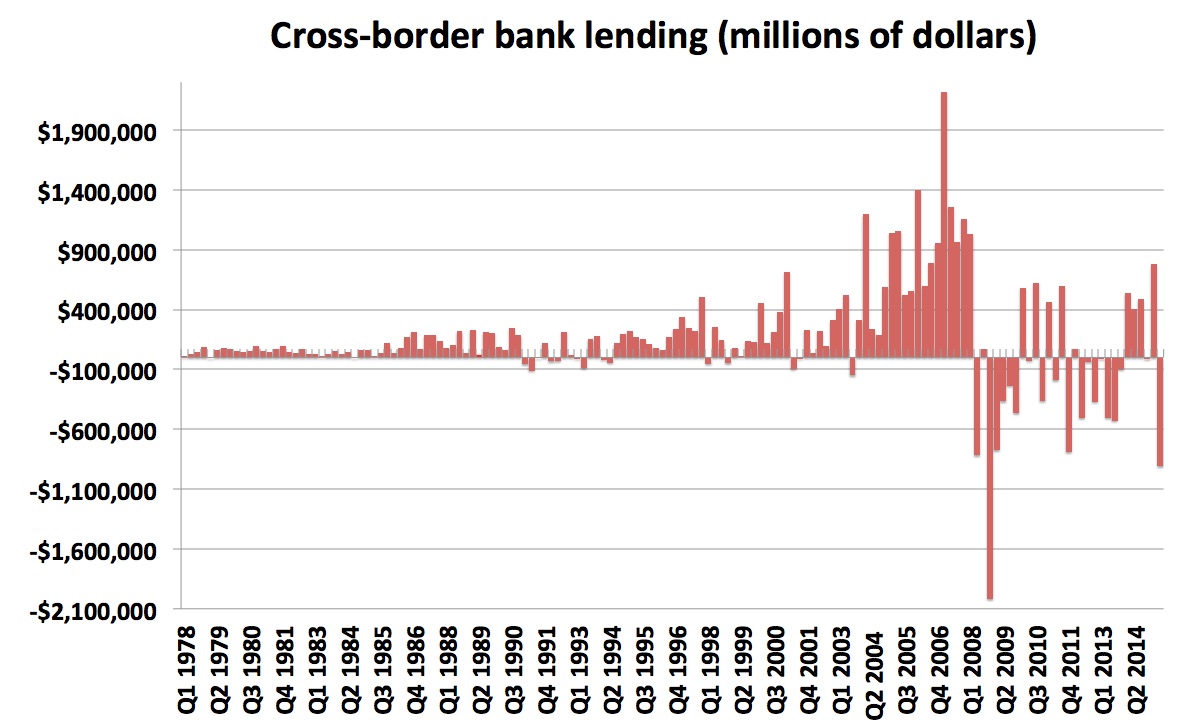 Is this a repeat of the kind of quarter that led into the Great Recession — that quarter in which almost no one saw a hint of recession coming, much less the worst recession since the Great Depression?

The meltdown of the Chinese economy is big. How big? China’s demand for steel, a bellwether commodity in the industrial world, is collapsing rapidly.

If anyone doubted the magnitude of the crisis facing the world’s largest steel industry, listening to Zhu Jimin would put them right, fast.

Demand is collapsing along with prices, banks are tightening lending and losses are stacking up … oversupply is worsening … [and] the fallout from the steelmakers’ struggles is hurting iron ore prices and boosting trade tensions as mills seek to sell their surplus overseas.

“As demand quickly contracted, steel mills are lowering prices in competition to get contracts,” Zhu said.

Some Chinese steel companies have seen their stock fall by as much as 50% recently, and China’s state-owned Sinosteel Co., a monster steel trader, failed to pay interest due on its bonds last week.

The slowdown in Chinese steel and in US oil and other heavy industry has already started a massive domino effect.

Hitachi Construction Machinery Co., Asia’s second-biggest maker of building equipment, cut its sales and profit targets for the year as a slowdown in demand in China extends to the developed world.

The company trails only Komatsu Ltd. in Japan’s construction equipment market and is among the world’s top suppliers of the large excavators and dump trucks used by miners. Both Komatsu and Hitachi Construction have been quick to warn on the impact of China’s economic woes, and in its first-half earnings report on Tuesday Hitachi signaled the slump in demand is spreading.

…Hitachi Construction cut its operating profit forecast for the year to March by 44 percent.

China’s demand for construction equipment continued to drop substantially as existing works stalled and new orders for projects were delayed, according to the Tokyo-based company. In addition, it cut its global market outlook for excavators because of a slump in demand that is now affecting all major markets bar India. (“Global Recession Alert–Hitachi Construction Slashes Profit Outlook To 50% Of Prior Year“)

Caterpillar, of course, has been reported in this blog as experiencing a similar major slowdown with fourteen quarters of declining sales, and the dreadful durable goods report that came out from Bloomberg on Tuesday verifies this global cascade of dominoes:

The factory sector is showing cracks with orders contracting slightly more than expected, down 1.2 percent in September with August’s contraction revised lower to minus 3.0 percent…. The decline in unfilled orders suggests that factories, lacking new orders, are working down backlogs while the decline in inventories points to growing caution in the business outlook…. Industries showing declines in new orders include primary metals, machinery, and computers & electronics. Orders for civilian aircraft fell 62 percent in September following a 23 percent decline in August. (Bloomberg)

So, even the already deplorable figures for August are now being revised lower. Orders for durable goods were in decline for eight months, and finally took an all-out plunge at the end of summer.

The Wall Street Journal warned that US companies are poised to report their first declines since the Great Recession:

From railroads to manufacturers to energy producers, businesses say they are facing a protracted slowdown….  “The industrial environment’s in a recession. I don’t care what anybody says,” said Daniel Florness, chief financial officer of Fastenal Co. (“US Companies Warn of Slowing Economy“)

Bear in mind that all of this decline is happening, even as central banks, including the Federal Reserve, continue shoveling copious amounts of free money into the boilers of bank basements. This downturn is happening in spite of enormous ongoing stimulus. The faster the big banksters shovel, the more the global economy bogs down. Clearly the heavy lifting of central banks is already powerless to stop this economic decline.

Just how much are central banks shoveling stimulus money into the furnace? Here’s a big answer buy ambien uk online from Europe: Eight nations in Europe have sovereign bonds that are trading at negative interest, meaning investors are paying these nations to hold their money … for five years! As of yesterday (October 27th) fourteen countries have negative yields on their two-year bonds: 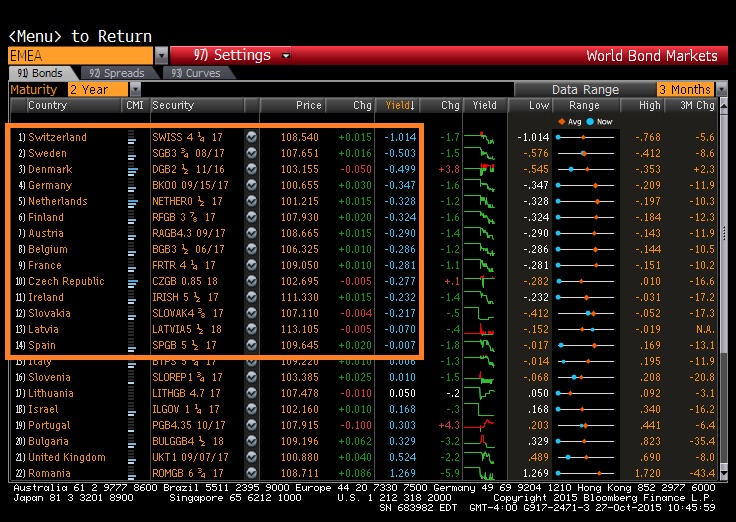 And Italy just joined the ranks, making it now fifteen European nations with negative yields on their sovereign bonds. More telling still, look at who is included. Can you imagine that Spain, Ireland and Italy, nations with the worst debt problems, are now able to sell their debt for a profit?!

It’s been a long race to the bottom of low interest for Europe and the United States, as well as for other countries like Japan and China, which has recently joined the race. Yet, the race is nowhere near over as far as the central banks are concerned. Sweden is expanding its quantitative easing program for the fourth time since February:

The governor of Sweden’s central bank says any speculation that he and his board are running out of ammunition in their monetary policy toolbox is misguided.

Even with the benchmark repo rate at minus 0.35 percent — the lowest level in the Riksbank’s 347-year history — there’s still “more space” for cuts, Governor Stefan Ingves said in an interview on Wednesday.

Since last week’s signal from the European Central Bank of yet more stimulus to prop up the euro zone, central bankers outside the single currency bloc have found themselves under intense pressure to protect their markets from the monetary nightmare that looms. (“Fed’s Race to the Bottom“)

So, even though the race among central bankers to who can get the lowest has already gone sub-basement, Sweden is willing to dig even lower. Any why not, if you can finance your national debt by getting other people to pay you for taking their money?

You don’t think that’s a financial world that is standing on hits head and blubbering its lips with its index finger?

Clearly central-bank stimulus is no longer giving much bang for the buck (or klang for the kroner). With interest rates diving deep below the sub-basement into a realm where once-upon-a-time no central bank dared to go, heavy industry is collapsing all over the world! That means it is already game-over for central-bank stimulus. Their stimulus policies now have absolutely zero positive effect on the economy even with interest going sub-zero while quantitative easing continues in many nations to hand out free money to banks.

Yet, somehow the world of stock investors hasn’t figured that out yet. Even today, as the Federal Reserve announced it was staying in the race to the bottom (but holding at zero percent interest), the US stock market surged upward.

When the world is this far upside down, with central bankers dancing on their heads, all giddy about their ability to stoop even lower, it is surely not hard to realize the outcome has to be economic apocalypse. How can a world gone goofy end up in any other place?

On October 2nd, when the Bureau of Labor Statistics released its abysmal jobs report, the stock market flinched (an old knee-jerk reflex to terrible economic news) and then immediately bounded upward. Says one anonymous writer on David Stockman’s Contra Corner,

This terrible news was immediately interpreted as good news for the market, because the Federal Reserve will never ever increase interest rates again. Over the next three weeks, the economic data has continued to deteriorate, corporate earnings have been crashing, and both Europe and China are experiencing continuing and deepening economic declines….

A 10% surge based upon lousy economic info, as the economy is either in recession or headed into recession, is irrational, ridiculous, and warped, just like our financial system. This is what happens when crony capitalism takes root like a foul weed and is bankrolled by a central bank that cares only for Wall Street, while throwing Main Street under the bus.

…The awful U.S. economic data pales in comparison to the absolute implosion occurring in China, as they desperately falsify economic growth data, threaten to prosecute stock sellers, censor truth tellers, bail out failing government entities, and manipulate their currency, to fend off impending disaster. Europe wallows in an ongoing depression as youth unemployment in most EU countries ranges between 20% and 50%.

…The market rebound of recent weeks has essentially been grounded in exuberance that the global economy is deteriorating so quickly that central banks will insist on accelerating their monetary interventions.

…[Central bankers] have trained the Wall Street Pavlovian dogs to salivate at the ringing of the QE/ZIRP bell. They’ve managed to delay the day of reckoning, but will not permanently fend off reality. Booms fueled by easy money, ALWAYS go bust. (“Behind October’s Sucker’s Rally–The Economic Trends Continued To Head South“)

Gee, I couldn’t have said it better myself.

When the world is so crazy that its wealthiest people yell, “Yay, we’re all dying, so that means more free yummy medicine!” then you surely can figure the bust is going to be an all-out epocalypse. And when the investing euphoria is happening because the lunatic central bankers have started carving out sub basements to the sub basements to create an economic bomb shelter, you know the epocalypse cannot be far away.

So, duck and cover.

And while you’re under the covers, here’s some scary reading on the coming epocalypse:

“A fast-paced and apocalyptic look at the financial future, taking in financiers’ greed, central banks’ incompetence and impending Armageddon for the dollar…Rickards may be right that ‘the system is going wobbly.’ …Let’s hope he’s wrong.”  — The Financial Times

“One of the scariest books I’ve read this year. The picture that emerges is dark yet comprehensive and satisfying.” — Bloomberg Businessweek

“One of the most urgent books of the fall.” — Mike Allen, Politico