Home » Economic Predictions » Big names weigh in on big risks of global economic collapse
« What is Margin Buying in Stocks or a Margin Account?
Bank of America Finally Catches on to Global Economic Collapse » 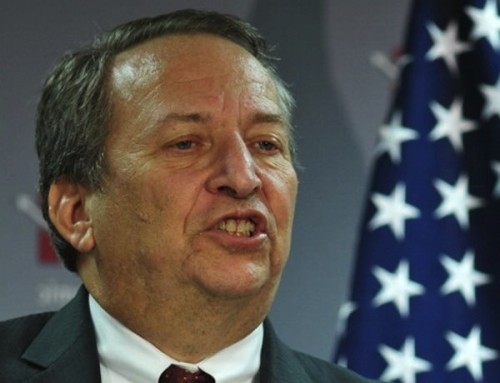 There are few economists that I dislike more than the churlish Larry Summers; but when even your economic foes join you, it bears noting:

The dangers facing the global economy are more severe than at any time since the Lehman Brothers bankruptcy in 2008. The problem of secular stagnation — the inability of the industrial world to grow at satisfactory rates even with very loose monetary policies — is growing worse in the wake of problems in most big emerging markets, starting with China…. Policymakers badly underestimate the risks of both a return to recession in the West and of a period where global growth is unacceptably slow, a global growth recession. If a recession were to occur, monetary policymakers would lack the tools to respond….. While the talk has been of recovery [including Larry’s own until it became obvious that there is no recovery] and putting the economic crisis behind us, gross domestic product forecasts have been revised sharply downward almost everywhere…. The effects of hysteresis — where recessions are not just costly but also stunt the growth of future output — appear far stronger than anyone imagined a few years ago…. Western bond markets are sending a strong signal that there is too little, rather than too much, outstanding government debt…. I am convinced of the urgent need for substantial changes in the world’s economic strategy.  (Larry Summers, “The global economy is in serious danger“)

Well, Larry, I imagined the “effects of hysteresis” a few years ago, though I didn’t use that fancy term, and I have been convinced throughout the Great Recession (which continues to this day) that substantial changes were needed in the world’s economic strategy, and I have noted all along that no such changes were even being attempted.

However, I’ve noted all along that the solutions that were being employed to attempt recovery were creating too much debt, which would be the core of our next problem, and you say more of that same answer is the key to success.

So, where were you all this time? You’ve been talking about “recovery” as if it were a real thing. Are you just getting on the show boat now by recognizing that it isn’t happening? Better late than never, I guess. But, hey, who am I? You directed presidents and the national treasury and Harvard University. I direct no one. Sometimes my dog barely listens to me, and sometimes he snarls just like you.

Unfortunately, Larry, you are still offering the wrong solutions, just as you always have been. You still place salvation in the hands of inept and greedy, self-serving central bankers and still encourage debt as a path back to prosperity. I am stunned that you are still stupid enough to think the problem we face is a lack of debt now that you have finally smartened up enough to stop parroting the government nonsense about “recovery.” I cannot even regurgitate your answers here without throwing up on everyone, so I have left most of them out of the quote.

What a puffed-up and hideous thing you are! You can finally acknowledge the problem (after years of talking as if there were a recovery in process, which there never has been); yet, you still keep banging the drum for more government debt!

(Heavy sigh at the shear stupidity of the human race.)

Larry, however, is a man of the government cloth — a former US Treasurer — so you can hardly expect him to think outside of the establishment that created this mess in the first place. He is only worth quoting here because he IS from the darker side yet still is forced by circumstances to recognize that “recovery” is rapidly vanishing into the mythological mist.

Now, about all that debt via those bonds Larry champions, I shall let the highly recognized king of the bond world weigh in:

Gross, once head of the world’s largest bond-trading firm until he was jostled out of position in a clash of Titans, advises people to take their money largely out of stocks and bonds and sit out the current market buy zolpidem tartrate uk volatility on a cushy pile of cash. If people take Gross’s advice, the government will not find it easy to issue more bonds now that China and Russia have made a run for the exits.

Sit it out on a single dollar bill if that is all you have, for Gross says its better to make nothing right now than to be invested in bonds or stocks.

Gross, who earlier made prescient calls on German bunds and Chinese equities, said U.S. stocks will drop another 10 percent because economic conditions don’t support a rally…. “Investors need cold water splashed on their face and sit out the dance.”

Joseph Stiglitz, a Columbia University professor and Nobel laureate, discusses the risks facing the global economy with Bloomberg’s Francine Lacqua at the 2015 Annual Meetings of the World Bank Group and the IMF in Lima.

The Eurozone has not gotten its act together. The program that they’ve imposed on Greece is a guarantee that Greece’s depression will continue…. America’s recovery is anemic…. We are going into a Japanese kind of stagnation, which is very difficult to get out of. It’s not an inevitable force of nature; it’s what we create…. Monetary policy can’t solve it. It can worsen it, but it can’t solve it…. We have such a backlog of things that we know now need to be done…. The commodity boom that fueled global growth since the Great Recession is, I think, over…. Over the last third of a century, basically all the gains of growth have gone to the top ten percent. The bottom ninety percent has seen stagnating income…. An economy which doesn’t deliver for the vast majority is a failed economy. I don’t think it’s the laws of economics; it’s the way we’ve shaped our economy. (Bloomberg)

Another Nobel laureate economist, Robert Shiller, warns that this is “a somewhat anxious, worrisome time.” Shiller says that, unless there’s a civil society watching, an economy “incentivizes” manipulation and deception:

It’s a fundamental problem with completely unregulated or unwatched free markets. A recent example is Volkswagon…. Right now we are in what I call the new normal boom…. I think it’s a somewhat anxious and worrisome time…. Young people are worried, and it’s just … a sense of instability.  (FOX Business Network)

The days of global economic collapse are closer now

I have said that the world will move into global economic collapse this fall, and it is pretty clearly on a rapid path in that direction when you have Nobel laureates joining in expressing the risk.

I’ve said a huge part of the problem will be the mountain of debt that nations have already taken on. They are snowed in and have plowed the snow straight ahead, instead of off to side. As I predicted near the beginning of the Great Recession, the government plows are finally reaching the point where they can push the snow no further.

Decide for yourself if you prefer Larry’s answer or mine, as expressed on other parts of this blog. Regardless of which one of us you go by, global economic collapse appears to be rapidly on its way, and everyone whose writing is on this page can agree that no responsible actions of any kind are being taken that are sufficient to avert it. It is coming like a steady march. Its presence can be felt, its footsteps now shaking the ground we stand upon.

Republicans and Democrats alike have offered nothing but exhaustingly tired and failed answers. Larry was one one of those government economic manipulators and is still part of the drone mentality; but even the drones are now waking to see present solutions have passed the point of diminishing returns where they are not capable of stimulating recovery any more.

Beware the Jabberwock, my friend, the jaws that bite, the claws that catch! It’s your money they will cling to. You can be sure they have future plans already made to bail out their bankster buddies. Unless you are prepared to get angry and active and to go outside the establishment bounds for answers, you lose. We all lose.

Remain addicted to your silly party, and you will have nothing unless you are part of the top ten percent. Both parties have been stripping away at you for years. But, once the middle class is gone, the top ten percent will have no one left to sell to, so even they will become less rich … and that is true global economic collapse — a sinking tide that lowers all boats, even private yachts and government destroyers.